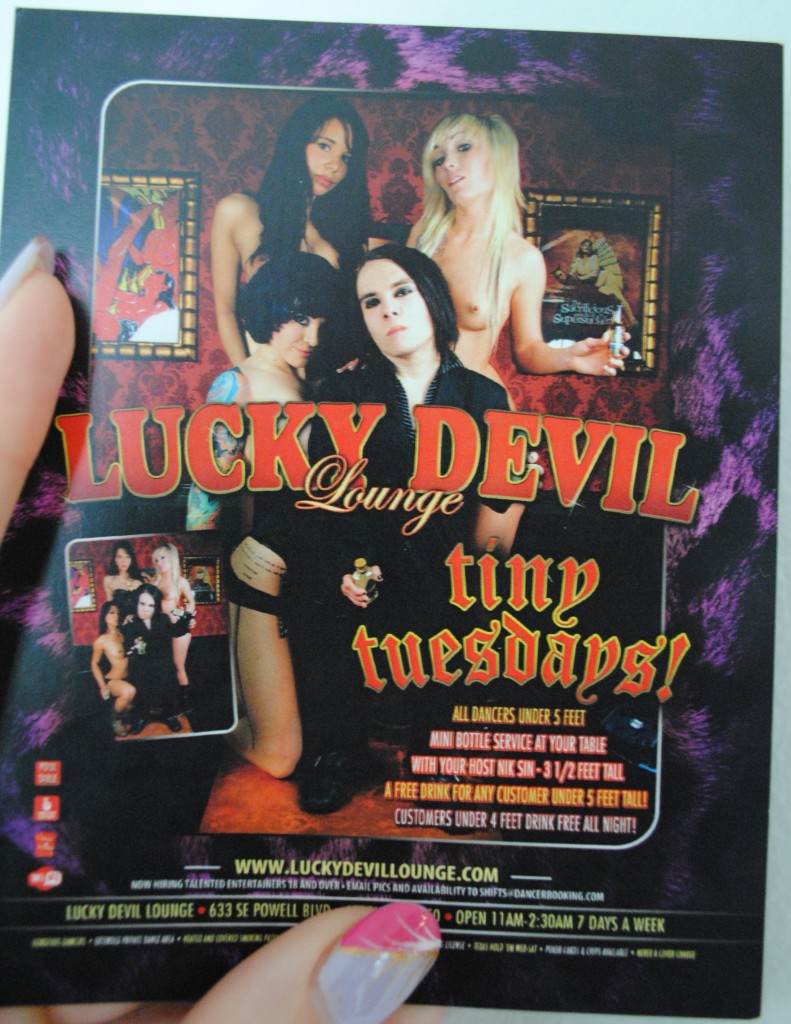 This week I stopped by Tiny Tuesday at Lucky Devil Lounge (633 SE Powell). The ad boasted that all dancers would stand under five feet, there’s a three and half foot tall host, mini bottle service, a free drink for any customer under five feet, and “customers under 4 feet drink free all night!”

I was surprised by the amount of male customers taking advantage of the free drinks thing. When a friend asked what it had been like, I said that there were kind of a lot of little people in attendance, “Well, there were three dudes at one table…”

“Was it Mini Kiss? Are they in town?”

“I don’t think so.” I imagined Gene Simmons sans makeup and decided that Mini Kiss and Kiss must look the same when out of character. These guys were dressed like skaters, “They looked more like Wee-Man, you know?”

I think in my head, I had pictured a few wasted 4’11” female patrons, a bunch of solo repressed-looking old dudes, and the dancers being the same as usual. It’s definitely one of those clubs where management favors petite dancers and the overwhelming majority of girls on any given night are around five feet tall anyway. “I don’t know, some of these girls look like they’re pushing five-two,” someone joked.

Truth be told, all five dancers were pretty tiny. Two wore moccasins and three wore cowboy boots with modest heels. It was hard at times to watch what was happening on stage because I couldn’t see over the customers sitting at the rack. Private dances were being sold, but that probably had more to do with the fact that all of the dancers (such as Elle) were attractive, and wasn’t necessarily on account of their stature. If anything, I could see the night being a hit with men who hate heels.

Other than the handful of little people letting the club make good on its offer (they did seem to be spending the difference on the girls), the crowd was mostly young hipster types, shorter than average men, one group of middle-aged Hawaiian shirt guys, and the Texas Hold’em table, which takes up a good portion of the room. It was definitely bustling for a Tuesday and not with old lecher types. Nik Sin, the 3’5” host, was mingling in a classy tailored suit and carrying airplane-sized bottles of liquor as promised.

There was a slight novelty/borderline exploitive vibe, but hey, most alliterated theme nights at strip clubs are heavy on novelty. It felt like harmless fun next to Two-Girl Tango Tuesday sex shows at Casa Diablo or a feature appearance by Little Tina at Stars. Plus I’m sure Weezy would probably be all over that shit.