TITS AND SASS SERVICE JOURNALISM BY AND FOR SEX WORKERS
Latest
Home What is Sex Work?

END_OF_DOCUMENT_TOKEN_TO_BE_REPLACED

One of the brightest spots of sex work activism is when some bright-eyed bushy-tailed sex-worker-to-be finds her way into the space and wants to know the best way to get into our sordid business. “Come, little one! Join me in the fresh hellscape that is the business of selling sexual services,” I declare, fancying my mentorship style half old-school brothel manager chain-smoking Virginia Slims, half Archimedes the uptight but good-hearted owl from Disney’s Sword in the Stone. But one of the darker spots of the same situation is when these apprentices say things like, “I think I could start with something easy like stripping.” Oh, girl. You did not.

It is times like this that I wish I had this story in my back pocket to pull out and give to would-be strippers that think dancing is the Diet Coke of sex work. It is the story of a man with a shit-eating grin and a monumental sense of entitlement calling the police on a stripper who denied him sex in a VIP room in the appropriately named city of Butte, Montana. To recap, this man believed that the denial of sex from a stripper was not only a criminal offense but a criminal offense worth escalating to involvement with law enforcement. The sense of entitlement to sexual services beyond the ones on the official job descriptions are ones to which strippers are subjected regularly. While it is newsworthy because the guy actually called the cops, strippers know that boundary-pushing clients are part and parcel of the sexual and emotional labor of stripping.

END_OF_DOCUMENT_TOKEN_TO_BE_REPLACED

An author has posted an ad on Craigslist seeking a young woman to have sex with him and keep a diary about it for a month, after which he’ll write a book about the experience and self-publish it on Amazon. Literary experimentation for our times? Product of reading too much Henry Miller? Really complicated scam to get a young fuckbuddy for a month? Sugardaddy who’s low on sugar? What the FUCK is really going on here and who is the kind of person who gets on board with this?

The book will detail every aspect of a mutually-agreed to romantic affair between myself and a young FEMALE lover (perhaps you), experienced over 30 days, as in the novel. The difference between the first book and this one will be verite: everything in this new volume will be the truth as both participants see it. If you agree to participate in this project, you will keep a diary of all of your thoughts, impressions and memories of the thirty day affair that we will share. I will then combine your written thoughts with my own to present the reader with two versions of the same erotic story. One love affair, as seen separately by the man and woman.

In case it gets taken down, here’s the screenshot below. We encourage someone to write in and apply to get the free copy of his first book!
[via Romenesko]

END_OF_DOCUMENT_TOKEN_TO_BE_REPLACED

What is Bike Smut?: An Interview With Poppy Cox 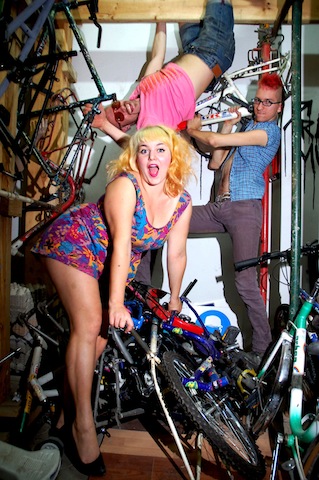 So I was a bit familiar with bike smut when I drove to sit down with the vivacious woman at a small coffee shop in SE Portland. Upon entering, we recognized each other immediately.

Can you explain Bike Smut?

Bike Smut is an international touring film festival celebrating human powered transportation and sex positive culture. Each year, we present a new program of short films about bikes and sex made by cyclists, queers and perverts from all over the world. I would consider myself a “bike-sexual.” I’m mostly straight, however one of the things I consider before I’ll date anybody is: do you ride a bike?

Pedalpalooza is 3 weeks of (nearly all) free bike events that happen every year in June in Portland. They are not organized by any one or group of people, but instead are totally open source. Anyone can organize an event and it will be put on the official calendar. The world naked bike ride is the biggest event that happens as part of it each year. My bicycle is a huge part of my life. When I go out or go to work, I ride my bicycle. I know how long it will take me, and I know how I’m going to get there. And if I had to guess, I bet 90% of bike commuters would agree with how I feel.

And how does that relate to your work?

In this car-centric, patriarchal society, it can be considered one of the biggest oppositions to that, to ride a bike. I consider it an act of freedom, to refuse to drive a car. All different types of people are bicyclists, so there’s a great deal of diversity but we have that major thing in common.

END_OF_DOCUMENT_TOKEN_TO_BE_REPLACED

This Week in Videos of Badass Sex Workers

The Secret Service escort and the hot dog stripper finally speak to the media.