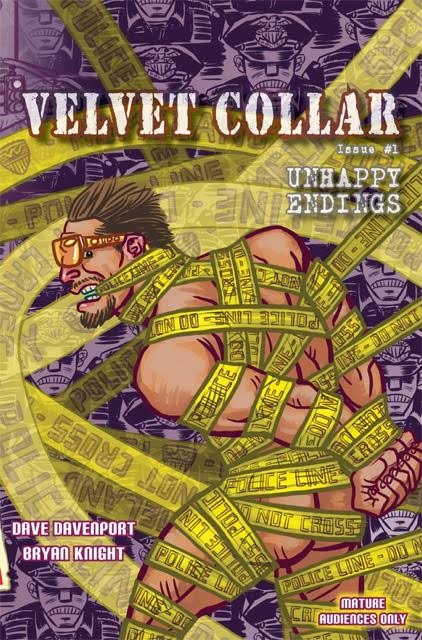 Velvet Collar is a comic book series written and produced by worker Bryan Knight and drawn by queer comic artist Dave Davenport. It depicts the lives of five male sex workers. In the course of the series’ narrative, an escort listing service is shut down by the feds—a thinly-veiled representation of the Rentboy raid and subsequent prosecutions.

Dale Corvino, who as Ask Dominick was Rentboy’s advice blogger, interviewed the creators of the comic series for Tits and Sass. He spoke with Knight in person in New York, while corresponding with Davenport, who is based in Los Angeles. Corvino is now a board member of the Red Umbrella Project (RedUP). The org’s 2014 documentary Red Umbrella Diaries was generously supported by Rentboy’s founder, Jeffrey Hurant. RedUP will be coordinating with SWOP Behind Bars to provide support for Jeffrey while he serves his sentence related to the Rentboy prosecution. Of this effort, RedUP Program Director Lola Garcia says, “While workers are our primary concern, nobody deserves to be jailed for involvement in the sex trade, provided they are not coercing sex workers (i.e. sex traffickers).”

The interview that follows has been edited for length from Corvino’s emails with Davenport and a transcription of Corvino’s conversation with Knight.

Dale Corvino: The Velvet Collar Kickstarter discusses representation of sex workers in alternative comics. Chester Brown is probably the most prominent creator who mines the topic, but he is admittedly writing from the trick’s perspective. Other depictions often feature characters with limited agency, as you point out. (Though there are a few inspiring exceptions to this rule.) In the queer comic space, sexuality is often depicted; sex work rarely. Does the project of depicting workers as fully realized protagonists in the comic space challenge both the comic genre and the queer comic sub-genre?

Dave Davenport: Definitely. But I’ve known sex workers at all points of my life, a good deal of my friends have been so at one time or another, and I may have had to hustle to make the rent at one point in my life. It’s a part of life, it always has been, and always will be. It needs to be a part of comics as well.

Bryan Knight: First, I’m telling stories about real people who have done or are doing illegal things…and whatever ethics we may have about it, there’s that first fundamental block. The practice has a long stigma and people are going to reflexively flinch. Second thing, there’s sex. There’s graphic sex. I made the choice not to censor that part of their lives because it happens. Not only in the transactional sense, but as a part of their private lives…it’s about as real an experience as I could fully capture.

As for queer comics…in early queer comics, we didn’t worry about mainstream acceptance, we made it for our friends. We weren’t concerned about sales or reputation because we were already fucked!

Right now gays are in the mainstream, we have marriage, and part of that strategy has been desexualizing everything we are so this particular comic pushes us back into that realm where sex and identity are intertwined…the narratives of acceptance have been, “We’re just like you!” but the truth is, we’re not…a lot of naked truths get exposed and that’s what I plan to bring to the comic genre.

DC: How did you two come to collaborate?

BK: Dave is a wonderful artist who’s produced a lot of great work that I’ve seen over the years…recently with Hard to Swallow. He’s published his own work, Damaged… He’s been one of the most prolific queer comic artists of the last twenty years. So I actually approached him with other projects before this one…

DD: Bryan randomly came into my shop (Marginalized Tattoo in Los Angeles) right after the Hard to Swallow collected volume had been published and was the first person to buy it from me. That was the only time I’d ever met him. A year later he asked me to draw a comic for him. I initially turned him down, but he wore me down with his charm and insistence.

DC: Issue One is titled “Unhappy Endings.” How deep into the series have you developed the narrative arc?

BK: I’ve planned a nine-issue limited series with a definite beginning, middle, and end. I’ve thought through the topics but I’ll (no doubt) get input from readers on what topics they want covered and what they want to see, but the primary narrative I have pretty clear in my mind.

When I was pitching the idea to a test group, one of the questions was, “Where in the comic did you show what a normal session looks like?” and you know what? I didn’t. So I had to go back…the hardest part has been picking which topics to talk about and which I could leave for later…

DC: The cover illustration of Issue One teases one subject that the series will touch upon: the Rentboy raid. Were you directly affected by the shutdown of rentboy.com? What’s your take on what went down?

I was closest to Hawk [Kinkaid] who ran the program to educate and to make things safer for workers, Hook Online… I was most affected by how it hurt him, so that was my personal stake…I was just angry about what this whole event represented.

I was very sad about it. Workers made good livings. Were they angels, all of them? No…but it allowed them to take care of their families. It was there when the recession hit, and the job market’s changing structures did not provide as many opportunities. It helped people survive. It helped keep a part of gay culture and sex culture alive…good and bad, it made life more interesting…

I’ve thought a lot about it which went into the series. I created a fictionalized answer to “Why did the Rentboy raid go down?” and that is the driving plot factor of the series.

DC: The series follows the lives of five different workers and it looks like you modeled these depictions on actual people? What can you tell us about that process?

DD: Visually, it’s got its pros and cons. You have specific photo references –which is great–but then you also need to capture the likeness. In the end, the characters are based on the real people, but aren’t just drawings of said people.

I made it a point to explain the character and how they would be depicted…I explained, “Your friends, clients, or business partners who see you in this may not be able to distinguish fiction from reality…” I have a disclaimer at the back of the book, “This is a fictionalized version of events…” for people’s  safety and the purposes of entertainment I’ve had to re-arrange things.

So four of the guys are Abel Rey, Scott Reynolds, Will Foster, and my friend Rica Shay. Abel is an awesome guy here in New York, Scott is a performer and trapeze artist, Will has been retired for some time but was Rentboy’s 2015 Best Bear Escort, and Rica Shay is a genre-busting gay hip-hop performer and dancer in Los Angeles; he loves escorts and said, “I’d love to be a character.”

For the characters of Scott and Rica Shay, I composited the experiences of two or more escorts for the purposes of the narrative. I know an escort who’s been in the business for over 40 years but did not want his image depicted… So I took Scott’s experience and his experience and combined them. And although Rica Shay loans his performer name, hip hop talent, and likeness, I’ve composited the experiences of several escorts. The fifth character is based on a performer who specifically asked to withhold his performer name and likeness.

DC: The Kickstarter includes a disclaimer about how the depicted characters are consenting adults and not coerced or trafficked. I recognize the need to state this in our current climate, but I also feel like the trafficking paradigm—and the continued conflation of consensual adult sex work with trafficking—is taking over our representation just at a time when we are seeking to claim it. Does the series address this tendency? Or simply seek to refute it?

BK: The characters in the series are independent people. They are not slaves in the imagined sense where they’re collared or coerced or threatened. Although the coercion that is depicted is related to sex work, but not because of it. I have one issue planned which raises the topic. It’s not all glamour, some are doing this for survival.

DC: Acknowledging that the purview of the series is male sex work, but are there women or trans characters depicted in the series?

DD: One character has a wife and a child (who is fun to draw). The characters live in the real world where there are even (gasp) straight people working at gay businesses.

BK: One of the characters is an escort on the down-low. There are two recurring female characters in the series: his wife and his daughter. Without revealing too much, the honest conversation that this worker (the basis of this character) had with his wife and daughter…I was shocked when this story was told to me but very glad I got to include it. One of the questions we wanted to address was, “Do escorts have and maintain healthy relationships outside of work?” And a sex worker who entertains both men and women having a healthy relationship with his wife and daughter would really upend heterosexual expectation.

Trans workers…I approached several. I wanted to include specifically a …[trans man] sex worker. But the responses I got were either a lack of interest or a suspicion that trans people have been exploited [in such projects] for the freak factor; they didn’t feel confident that the character would be fully developed. To acknowledge their concerns, a…[trans man] character is not part of the narrative because of my limited experience. I couldn’t in good conscience write a …[trans man] sex worker character [without input]. I think it’s important to talk about trans people as part of the sex work community.

In Issue 5, a story is related about a trans worker from the 80’s who met a violent end. I was disappointed that this was the only depiction (of trans experience) in the series. Once the series comes out, I hope to have more trans workers come forward to participate.

DC: Prior to this collab, have there been depictions of sex workers in your work?

DD: My character Doug from the “Feral and the Ghost Skater” stories is very clearly doing some hustling at the beginning of one story. So, yes.

DC: What other projects are you working on?

DD: I’m chipping away at a graphic novel featuring my “Feral and the Ghost Skater” characters, as well as a number of other projects I’m working on at any time. I post them all on my Patreon page, as well as sketches and portraits I do regularly. I post a good deal of that stuff on my Instagram as well, in addition to my tattoo work.

BK: I have a gay horror anthology comic. It’s three short stories about hook-ups on the apps. Dave is doing the artwork. We haven’t had one in a long time. It’s short and sweet and fun and it will make people laugh.

As of posting, Velvet Collar Issue 1 has met its Kickstarter goal and is in production.