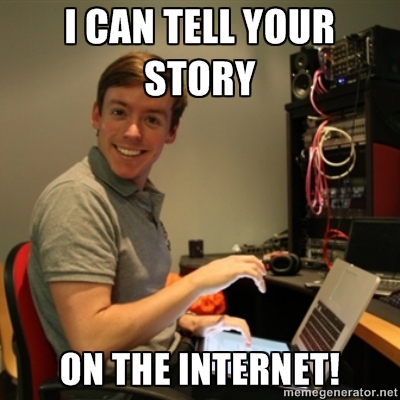 2) You already know your angle even though you’ve never spoken to any sex workers. It’s very helpful to me if you approach me after already deciding what made-up trend you’re reporting on. For instance, maybe you’d like me to tell you about how all of my clients are socially awkward and sexually inept? Or maybe I can talk to you about how tough/not tough/booming business has been since the recession, or how all of my clients in finance cry after they orgasm, or how hard it is for me to have a “secret life” or how I have to get labiaplasty because of porn-based expectations? I enjoy providing strangers with handy quotes to support their foregone conclusions. Tell me exactly what you need my work life to look like, and I’m all over it.

3) You know what GFE means. A billion gold stars for you! It’s very exciting that you’re so well versed in my industry’s lingo and that you’re able to use the phrase with all the finesse of a middle-aged man who’s just learned common texting acronyms, and harasses unfortunate strippers who’ve given him their numbers with “hey QT wat up im horny LOL.” Reading that you are aware of “GFE” makes me feel safe, like I’m corresponding with someone who really “gets” the intricacies of my job. It’s a magical keyword guaranteed to make me drop the panties of my soul.

4) You know I want to be anonymous. If I’m playing tutor to you for an entire semester’s worth of Hooker 101, odds are I want some credit. I want you to name and link to my personal blog, or to my work website if I’ve not said anything that would drive away clients. And the even better odds are that I’m not going to let my anonymity be yours to give. You’re not going to know my real name, I’m not going to call you from my personal phone number, and I’m not going to hang out with you in person. Like your empty assurances that you’re going to write an article whose sentiments I support (see #1,) your promise of my anonymity means nothing. Years ago, The New York Times outed a former sex worker who was generous enough to meet the reporter in person. He revealed a slew of physically and circumstantially identifying details that resulted in her being fired from her straight job on the same day the article was published. My entire profession is predicated on my ability to keep myself anonymous. You are not going to be smarter about that than I am.

Not that you care, because I know you only want to get your quotes and go home, but if you do meet a sex worker who’s downright eager to talk to you but who doesn’t have a well-established track record as an advocate or activist, it should be a red flag. You’ve probably found somebody brand new to the industry who’s really into being a “whore” and who doesn’t have any real insights because of her newness. It’s also quite possible that you’ve found someone who isn’t really a prostitute at all. Most of us are doing this to make money, not to dish to the first stranger who asks.

5) You might pay lip service to your query being something of an inconvenience, but deep down you’re convinced that I’m desperate to talk to you. Let’s get something straight: we don’t need you to tell our stories. We tell our own stories all the time, to ourselves, to each other, and to publications that have earned our trust and who respect us enough to let us write our own essays. Also, there’s now this thing called the internet—maybe you’ve heard about it revolutionizing the business of sex for sale? Nevermind, probably you haven’t—and most of us are really good at using it. That’s why there are  more escort blogs than you can shake a used condom at, both those designed for purely promotional purposes and for purely cathartic ones. And we have communities: message boards and duo partners and email groups. We have other friends in the business even if we’re independent. We know about activist organizations like SWOP and the Sex Workers Project and Women With A Vision. You don’t know about those because you’re ignorant and you think you’re too good for Google, and assume that we live lonely lives full of subterfuge and shame that make us ripe for interviewing. I’m sorry but we know each other, and we know better.

Here’s the bottom line about your byline: We are not farm animals, you’re not PETA, and we don’t need your voice, so stop pretending that you’re doing us a great favor. You’re doing yourself a favor by getting a paycheck and a publication credit, and we detect bullshit everyday as a way to stay safe and alive, so you better bring something better than the expectation of a warm welcome for your selflessness.

Maybe you think I’m exaggerating and there’s no way that most emails are this bad. Oh no? Here are two examples, each of which was sent to an escort with whom the emailer had no pre-existing relationship:

[B] What I’m wondering is how I could convince you to do an interview. It would be totally chill, over coffee lunch or whatever you would feel comfortable with. I am in no way looking to demonize you or the profession. I’m sure you have plenty of interesting stories you could tell me.

One of these was sent by someone whose magazine never launched and who doesn’t seem to be a legit career writer. The other is from someone with a decades-long career with many major magazines and newspapers. Yet they’re almost identical in their embarrassingly uneducated and presumptuous stance. It scares me that this is as good as it gets, that this is who we as sex workers are supposed to rely upon to make our lives intelligible to the general public.

A sex working acquaintance of mine once said she feels guilty for reacting badly to articles on sex work that are written by outsiders, and she compared it to (irrationally) feeling like every article about sports should have to be written by an athlete. It’s not that every article about sex work should be written by a former or current sex worker—we’re the authorities, but not the only authority. A better comparison would be this. Let’s say that someone who’s never played sports and isn’t a sports fan suddenly decides to write about pro football players without acquiring even rudimentary knowledge of the rules of play. Then that reporter shows up to a single game and writes about nothing but the uniforms, the bodies, the noises of the crowd, what’s sold at a concession stand, and proceeds to pretend it’s somehow a comprehensive take.

That’s how writers treat sex work all the time, and it’s precisely why, when I asked about 10 friends of mine to suggest even one well-written mainstream article by an (American) outsider in the past four years, everyone struggled to do it. We don’t need another article about the sensationalist stuff on the surface. We don’t need another “sensitively-written” profile on a single prostitute that never goes outside the lines of one individual’s life to look at the laws and circumstances shaping it. We need mainstream articles about condom confiscation, about travel restrictions placed on prostitutes, and about the profound lack of action by police regarding the Gilgo Beach murders. We need those articles from people who give a shit not only about the issues themselves but about the integrity of their reporting, so that they don’t write a 5,000 word article rehashing all the work of sex worker rights organizations without crediting a single one.

If all you’ve got is an internet connection and the impulse to write a fluff piece about prostitutes without a mention of our criminalized, stigmatized, and rights-less status as workers, don’t come knocking around my door. You may not want to demonize me, but I feel perfectly comfortable demonizing you.