In honor of International Sex Workers’ Rights Day, the Feminist Press is releasing a retrospective anthology of $pread Magazine today.  Current and former Tits and Sass co-editors got together to write about our nostalgic love for the magazine and the way it’s inspired our work.

Bettie, Tits and Sass founding editor emeritus: $pread magazine was walking (gracefully) toward its end when I was a bouncing baby ho, but, gee, what an amazing lil era. For a generation of workers who were lucky enough to see it begin I imagine it felt like what starting Tits and Sass felt like: Exhilarating, frustrating (deadlines are for nerds), and always eye-opening.

Sex worker-created media is a fascinating thing. It’s a lot like us, right? Sometimes hard to pin down, intelligent, always changing, and steady spilling tea you didn’t even know you were thirsty for. This book is as important as the magazine itself and I wish you could still get back issues! $pread existed to remind us that we have to keep telling our stories. No one else can do it for us. Even if they are constantly trying.

Also, $pread taught me that I should pay my taxes, so thanks for keeping the IRS off my ass.

Catherine, Tits and Sass founding editor emeritus, former $pread editor: I remember the first time I heard about $pread, in an article in Bitch, during an era when feminist publications didn’t cover sex work politics with nearly the frequency they do today—or, at least, didn’t include sex workers’ own voices, rather than speaking for us. I had already begun stripping in San Francisco, but was somewhat unfamiliar with the term “sex worker” or the burgeoning media movement. The Bitch article had me fascinated, and I soon found my own copy of $pread in my local indie bookstore.

I loved how the articles were a mix of political and professional, serious and fun. Topics ranged from a those as frivolous (but practical) as fake eyelash reviews to a sex worker-centric analysis of media coverage of the Eliot Spitzer scandal. I contributed my first piece to the magazine in 2007, and joined the editorial staff in 2008. My volunteer colleagues were sex workers and allies from all over the world, and every issue we released was a financial feat.

We sustained the magazine until 2011, when the same issues that plague print media across the board made it impossible to continue. Restless, that same year some former staffers joined forces with some popular sex work bloggers and began Tits and Sass to pick up where $pread had left off. I was delighted to eventually hear from Rachel Aimee, one of the original founders and long time editors, that they would be publishing an anthology of some of the most poignant articles gathered from our years in print. Tonight in New York City we celebrate the launch of the anthology—we hope to see you there.

Caty: When $pread first came out, sex worker-created media was few and far between. You could go online and read Charlotte Shane and Melissa Gira Grant’s early blogs, you could lug around dogeared, coffee-stained copies of Whores and Other Feminists and the Sex Work anthology, you could treasure the memory of driving for hours to see the Sex Workers’ Art Show in Boston to hear Leslie Bull declaim about “being a junkie ho in a sex worker world,” but there just wasn’t much out there.

The first thin issue of $pread in 2005 was a revelation. $pread amplified the activist/artist sex worker community simply by introducing us to each other by name: Will Rockwell! Sadie Lune! Jessica Land! Kate Zen! Darby Hickey! Monica Shores! It taught us that sex workers could do investigative journalism on an international scope—I still remember reading and rereading an article on a retirement home for aging Mexican sex workers. It taught us that we could write features aimed specifically at our community—I always flipped to the Indecent Proposals section first, to see what bizarre request some hapless sex worker had fielded from a client now—our own national version of water cooler chat.

You can still see $pread‘s mark on Tits and Sass today: Global Shorts became The Week In Links, Indecent Proposals became I Couldn’t Do It and My Sex Work Bucket List, and The Healthy Hooker became Ask A Pro and Ask Ms. Harm Reduction. $pread showed us that the sex worker community was multi-talented and active enough to create demand for media by and for sex workers with breadth and depth, and provide countless contributors to write it all.

In 2006, $pread‘s executive editor Eliyanna Kaiser asked me to write a cover feature on sex work and drug use. At the time, I wasn’t ready to do it. I felt like I was suddenly responsible for justifying my life and the lives of other drug using sex workers to everyone in my community. (It didn’t help that I wanted to start my manifesto with “A spectre is haunting the face of sex work, the spectre of the junkie ho!”) I wrote thousands and thousands of words without being able to narrow the piece down at all, while Kaiser was endlessly patient with me. But years later, I was galvanized by the fact that $pread had solicited that cover story from me, an out drug using sex worker, in the first place. I took courage from the way that $pread wasn’t afraid to print conflicting viewpoints from a diverse population of sex workers, devoting entire issues to topics like race and older sex workers. $pread inspired me as Tits and Sass co-editor to promote material by and for drug using sex workers, survival sex workers, Black trans sex workers, and sex workers with negative experiences, while also posting pieces which confronted respectability politics in our movement wherever they raised their ugly head. 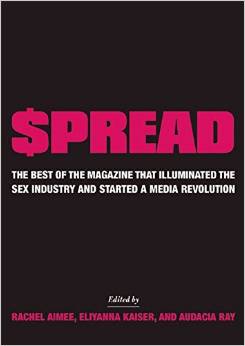 Josephine: Write what you know—a piece of advice that was repeated ad nauseum in my college journalism and English classes. But to me, it was useless. My classmates could easily write about their lives, about their interests. But me? I couldn’t even talk about my life, let alone write about it. I couldn’t dare tell the truth about it. Why? Because I spent the most interesting part of my life wrapped around a brass pole or draped over a middle-aged man, naked. I considered stripper the most definitive part of my identity, but also the most shameful.

It didn’t go so well the first (and only) time I mentioned that I stripped to a classmate. She made an off-color remark in response, and I resigned myself to the sad reality that I would probably never be able to talk openly about my work. To my shock, the next day she apologized and brought me an issue of $pread as a peace offering.

I’ll never forget that act of kindness. $pread allowed me to do what journalism school did not: write what I know. $pread was a platform for sex workers across the globe who, until then, could not connect with each other, who had never heard of each other. $pread pioneered community journalism years before it even became a buzzword.

Bubbles: A glossy like $pread was a huge deal, and it was open to all kinds of sex workers. Before $pread, the only sex worker-created publication I’d ever seen was the Portland, OR-based Danzine, a traditional xeroxed fanzine for most of its existence. When it ceased publishing, I found stripper community online in scattered blogs and forums, but it wasn’t until $pread came along that I realized all of us strippers talking online were part of a a larger community of sex workers interested in talking about the work.

When you work in the fast food of sex work (I think Mistress Matisse coined the term to refer to stripping), for most of your coworkers, it’s a job. No one in the dressing room—unless your dressing room is in Portland, or San Francisco in the 1990s—wants to talk about sex workers’ rights and issues, and most of them probably don’t want to call themselves sex workers. To me, a feminist baby stripper who bought Sex Work as soon as I started dancing at 18, the job and its attendant legal and social issues were endlessly fascinating. Finding out that some people in NYC had gotten it together enough to create a whole magazine for talking about this stuff was and is an inspiration.

They reached out to me because of my pre-Bubbles stripper blog (2002-2008, RIP) and I was lucky enough to contribute a couple of pieces. Its mixture of interviews, sex worker service pieces, first-person stories and scene reports was obviously influential on Tits and Sass, and we wouldn’t have been founded without it. In the very first email sent asking me to be a part of a then-unnamed blog project, the words “Picking up where $pread left off” were written. I’ll consider this a worthy endeavor if we’ve done one tenth of what they accomplished.