When I think of (non-posed*) strip club photos taken by outsiders—typically aspiring photojournalist types—I tend to cringe. There was the guy who was nice enough, but always just there in the dressing room. I hated that I had to walk to the bathroom to check my tampon string because this man and his giant camera were invading our space, lying in wait for one of the girls (out of those who had consented to being photographed) to do something. I wasn’t surprised to see that all his favorite photos were of the hottest messes smoking or doing lines. Then there are Terry Richardson’s strip club pictures.** They look like souvenirs that a customer using his cell phone on the sly helped himself to in order to snicker with his buddies later.

There is a book of strip club photos that I absolutely love and think anyone interested should own. It’s called Lapdancer by Juliana Beasley (powerHouse Books 2003). As the title would suggest, many of the photos are of strippers doing dances and interacting with customers, hinting at intricate backstories of varied stripper/customer relationships. It’s not surprising that Beasley herself spent eight years stripping in New York, New Jersey, Florida, Hawaii, etc. I would have guessed that only a stripper could photograph these nuances that outsiders can’t understand or even recognize.

What Juliana Beasley is to capturing the stripper/customer dynamic, a young photographer named Alicia Vera is to capturing the stripper/stripper dynamic. The thongs are no longer up to the belly button, the shoes are basically the same, the recession is in full bloom and the backdrop is the clubs of North Beach in San Francisco, CA. This is where the 25 year-old Miami-native has spent the past three years taking pictures of strippers. I stumbled upon her work last year when I got a Google alert for a Bay Citizen article. From there I visited her website and was so excited by her photos that I had to share them and talk about them. I had to talk about how someone who has never stripped could create accurate glimpses into life in the dressing room. 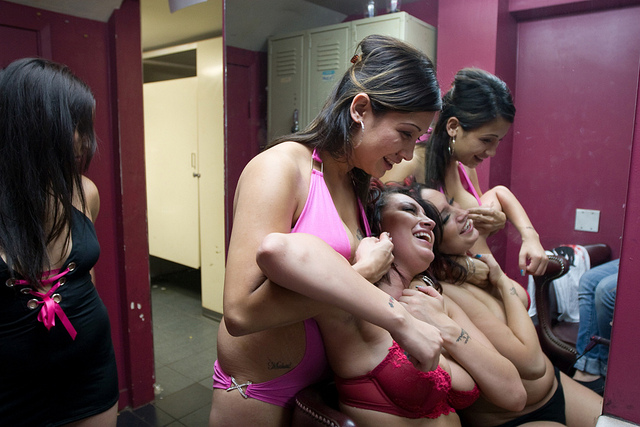 I sent my brother a link while we were on the phone and we perused her site together. This may sound weird and like poor boundaries, but you have to realize that there is nothing particularly sexual about her stripper portraits. They’re simply women at work, and in some cases, those same women at home. Alicia has done something that I have heard several sex workers (as well as photographers involved in the sex industry) talk about doing but never actually do. It’s something that $pread magazine touched on with their “Double Take” column, where they would ask sex workers about what they wear at work versus in “real life,” accompanied by corresponding photos. She has created a beautiful series of dancers at work juxtaposed with candid scenes of their home lives. They’re fascinating and… humanizing.

I happened to be going to San Francisco anyway, so I emailed introducing myself and asked if she would be interested in doing an interview for a site called Tits and Sass. It was nothing more than a url with a blank WordPress template which I claimed was going to be really cool eventually. I wasn’t going to blame her if she didn’t want to hang out with people from the internet for their hypothetical blogs, but she said yes. The thing about Alicia Vera is that she’s super freaking nice. She’s bubbly and sweet and there’s just no way not to like her. As soon as I met her, I understood how she is given permission to take these photos where there is so much vulnerability involved, of nudity with no promise of Photoshop. I got why dancers would let her into their homes to meet their partners and children. There’s just something so unassuming and nonjudgmental about her presence; it’s how she is able to let the girls go about their routines without her own agenda appearing in the photos.

You can’t walk along Broadway at night with Alicia for more than a few feet before giant bouncers and dancers running to the liquor store or taking a smoke break will stop to ask how she’s doing and if she’s taking pictures tonight. Inside the clubs, managers nodded in acknowledgment and girls would run up to gush in her ear. They all talk about her project with the kind of second-hand pride people feel when they’re confident someone they know has created something special. It’s something she’s wanted to do for years, “I don’t even think I was of age. I don’t know what it was, honestly. I just said, ‘I wanna do a documentary on dancers’ and it just popped into my mind and I got stuck on it.” 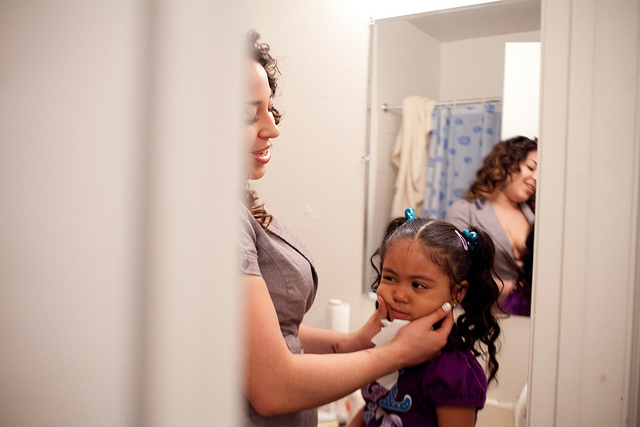 She first tried to photograph dancers in Florida with no luck. It wasn’t until after she moved and answered a Craigslist ad for an office job that she got her “in.” The company turned out to be BSC Management, which runs most of the clubs in San Francisco. “When they hired me, they knew that I was studying photography and they were like, ‘Do you want to be our photographer?’ This was exactly what I wanted four years ago and look, it’s like, fallen into my lap.” After shooting many of the clubs’ ads and events, it was easier for her to get to know the dancers and gain their trust.

We talked about other obstacles including the transient nature of many exotic dancers. It wasn’t surprising to hear that girls move around clubs in San Francisco just as often as they do in Portland. “It’s really challenging just because I feel like I build a relationship with someone and she’s finally comfortable with me shooting her without noticing that I’m there, and then I go in a week later and she’s gone. Ugh, I have to start all over. I’ve started getting model releases from everyone. I definitely need to have their contact info at the very least.” The project is such a labor of love that it’s unusual for Alicia to actually let a whole week pass without shooting at her main spot, The Roaring 20’s. She almost seems to have withdrawals when work or other obligations get in the way of her being able to take pictures. 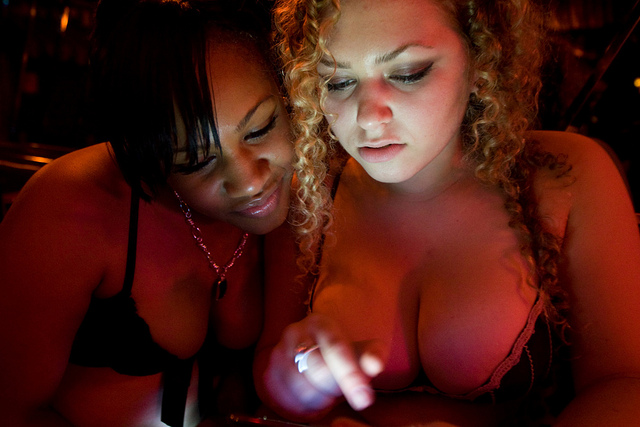 I wanted to know if her tendency to photograph the girls interacting with each other was intentional and why it was important to her.*** “After the novelty of being in a strip club wore off, I realized that the strip club is defined by the dancers and the tight-knit community formed in response to working in a volatile environment. These women may have not become friends in any other situation since they come from completely different backgrounds, but because they all come to work with a similar goal in mind, these differences are overlooked and an instant friendship is formed. Needless to say, there are disagreements between the dancers but overall they are very supportive of each other.” I guess I had assumed that while she couldn’t relate to lapdancing for her income like Juliana Beasley, she was able to appreciate universal themes like human bonding. Her answer was a reminder that strip clubs can be unique microcosms where class and race lines are blurred. Ah, the things that a fresh pair of eyes can see. When writing about at her images of strippers interacting with each other, I can’t help but think of a piece that Lily Burana recently wrote for Salon:

“What made that dressing room so special was that it was infused with the sex industry’s scarcest commodity: trust. […]  How funny that, of all my stripper memories, the club I most vividly remember is not the notorious establishment in which I worked, but the sisterhood that formed inside it. In a business built on fleeting fantasy and illusion, that kinship is the one thing that has lasted over time.”

So where does she go from here? “The goal for my project has always been to make a book and as of right now, it looks like I will be self publishing. I have yet to make the final edit since I am still working on the project but I am thinking of making two parts to the book. The first half will be the dancers at the club and the other half will be dedicated to the girls at home. […] Once I get closer to the end I will begin editing and sequencing with the help of Mike Davis. I am still debating whether to approach book publishers but I feel that self publishing might be the best route to go. I would have complete control of the production of the book and because of this it’d be a more meaningful, intimate, and personal object. The only upside I can see from having a big publishing house pick it up would be the distribution and name recognition that I’d receive from them.”

After the book is finished, she is moving to Mexico. “I need to rediscover my roots. I was born and raised mostly in the US and don’t have a clue what it really means to be Mexican. I feel that the best way to learn about a culture is to immerse yourself in it so my plan is to spend an indefinite amount of time there and work on projects. I also have a lot of family there that I don’t see very often. I intend on using my camera as a way to reconnect with them.” When I asked if she’ll miss the Roaring 20’s, it felt like a silly question. “Of course I will miss it! I have become very close to many of the girls who work there and the 20’s has become like a second home.”

Can’t wait for the book to come out? Find more of Alicia Vera’s photos on her site, blog, tumblr, and twitter.

*Philip-Lorca diCorcia’s “Lucky Thirteen” series of posed pole dancing strippers is a personal favorite. There is also the recent “Keeping Things Inside: The Hidden Transcript of Exotic Dancers” by Portland photographer London Lunoux.

**When I told Bubbles that writing about how Terry Richardson took bad pictures of strippers feels really obvious, she replied, “Looking at his pictures makes my vagina shrivel up inside me” to which I said, “Oh, then it just gets reabsorbed into your blood stream.”

***The next three responses come from an email exchange after the interview.