TITS AND SASS SERVICE JOURNALISM BY AND FOR SEX WORKERS
Home News The Week in Links: May 20 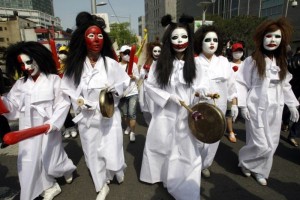 400 South Korean sex workers rallied against police crackdowns, with some protestors even attempting to set themselves on fire. (Thankfully, none were successful.)

This charming article reveals groundbreaking research from the University of Arkansas. Apparently, it’s big news that some prostitutes are educated, make a “rational decision” to go into the biz, and aren’t spending all their money on drugs. Who knew?

Yet another trial involving the murder of a prostitute: a Chicago man apparently killed an escort on the same night that he murdered his mother.

Last week, it was Houston celebrating strippers in a stage show. This week it’s a Las Vegas’s play titled $trip.

Reality TV star Danielle Staub has signed a three year contract with Scores. In other celebrity news, according to this ridiculously nasty piece, Ivanka Trump is a slut and a bad Jew for posing in a Playboy-eqsue bunny outfit for a fashion magazine.

A German insurance company is in trouble for treating its agents to a party with prostitutes.

The caretaker of a developmentally disabled woman was sentenced to five years in prison after taking the woman to dance at a strip club and arranging for her to “date.”