TITS AND SASS SERVICE JOURNALISM BY AND FOR SEX WORKERS
Home Movies Strippers vs. Werewolves 2012 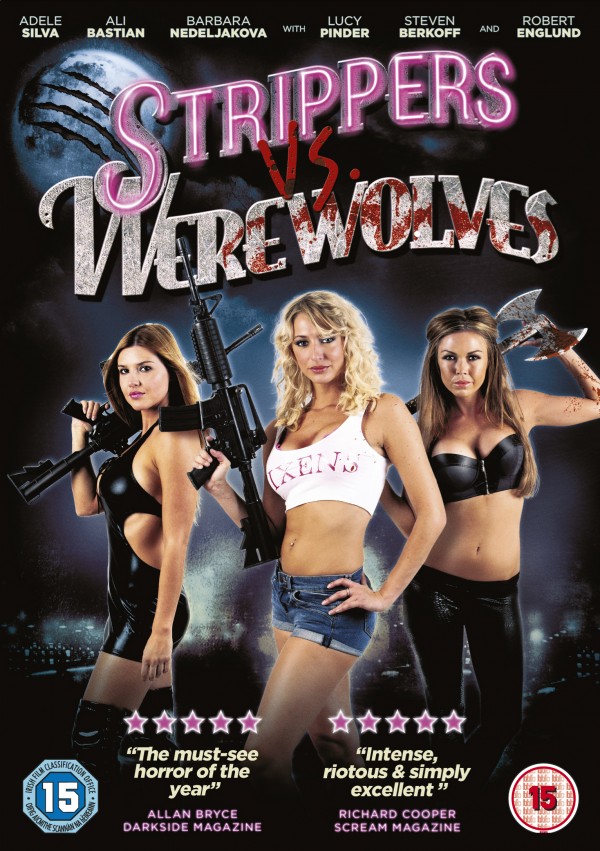 Versus films are B-grade action flicks, typically pretty academic and dry affairs, but Strippers vs. Werewolves, directed by Jonathan Glendening, is a very different beast (excuse me). Here, we have two mythical creatures which roam the night preying upon the weak, the former of the two being perhaps the most dangerous and unpredictable, known for dragging her victims back to the champagne room, where she feasts upon their flesh atop her pile of furs, jewels and, well, you get the idea. Pitting these two natural enemies against each other makes perfect sense.

The first scene, set outside the throbbing Silvadollaz nightclub, appears to have special effects done in Microsoft Paint. The lights inside flash like a nightclub at Christmas, the entrance is empty, the—BOOM! The whole place explodes, and a blood-curling Aroooooooooooooo splits the night as debris rains down. Okay, they’re giving me what I want, and they’re giving it to me right at the beginning? High-five!

We cut to animated credits, which are overlaid with the song “Hungry Like The Wolf.” It’s a nice touch which I appreciate for its subtlety.

Then the credits end, and the confusion begins.

What seemed from the outside as a meeting of Sin City and Underworld with a dash of Plan 9 From Outer Space soon morphs into a cheap music video for Lady Gaga. A stripper named Justice is dancing in an outfit that looks like it’s just been pulled from Britney’s video for “Hit Me Baby One More Time.” Alarmingly, it appears this is a no-contact strip joint. Like, the women keep their clothes on and the men are not allowed to touch them.

I faint right out.

From here there is a moderately acceptable performance by the “madam” named Jeanette, gags regarding a dead werewolf’s stiffy, and the appearance of ACTUAL real life strippers. Who is the woman in black panties on the pole? I tip her by eating a kilo of chocolate, the best I can do given the circumstances.

Suddenly, out of nowhere, a burgeoning plotline appears; Justice, the protagonist, is in a relationship with the beta werewolf, though neither knows the other’s secret. It’s blind date Beauty and the Beast! Justice tells her fiancé that she works nights at a vet clinic, and this is a nice lead in to some doggy jokes later, which leave me glowing and warm and fuzzy and pleased.

I struggle, though. I don’t really get this hetero-camp thing that’s going on. Like, there’s no Will and Grace references and no drag queens. I suppose it’s just kitsch, but it feels soulless.

I revive, because the strippers are punching a were-corpse in the trunk of a car, and slamming the trunk door on his cock repeatedly and I am screaming. 10/10. 100% gold. Academy Award for Best Picture. Misandry!

Then I’m bored again. The strippers are too dumb, and they’re all so white. Something is happening but I don’t know what it is because I’m on Tinder trawling for cock. I mean, where is Channing Tatum in this film? WHERE?!

I don’t know who any of the characters are, on account of zero character development (yes, but what does it feel like to dance for money, TELL US?!), and I can only tell Justice/Lucy apart from everyone else because she’s so irritating. All the male actors in the film look like they’ve been sourced from out the front of a Scottish fish and chip shop, or down at the pawnbrokers, which probably IS where werewolves hang out, to be fair.

A nice townie asks one of the strippers, “You a prostitute? My Mum’s a prostitute.” And I just want to hug him.

One of the werewolves has a brown paper bag over his head. I like this.

Ugh, Justice is just the worst. She’s a weak lead, displays no intelligence or street smarts, and further, doesn’t know how to flirt or hustle. Is this the grunge version of Twilight? Justice is fifty shades of boring!

WHOA! Justice’s fiancé calls the werewolf alpha out for saying Justice is a bitch (nice touch, scriptwriters, I see what you did there!), and says it’s misogynist.

Then comes the part of the film that makes me re-evaluate my life choices, namely, one of the actresses trying to work a pole; I see an amateur do it and I’m forced to look away, it’s just too gruesome. My sincere apologies go out to anyone who has ever seen me slither around like a naked mole rat marking its territory. There’s no grace or fluidity. What has been seen cannot be unseen.

It appears Justice is now playing for both teams, because she bit her fiancé’s cock and is now transforming? It gets really dark though, because the first part of her transformation is… UNDERARM HAIR! I’m not afraid to say I scream at this point. It was just too scary/hilarious.

And then the film kicks into gear, with all-out war between the two parties. There’s breasts; lucite; false eyelashes in bed; “meals on heels”; a severed hand on a slice of bread with ketchup; many, many blows to the groin, including one with a shotgun; the old codger from Snatch and Lock, Stock and Barrel; sight gags; unrealistic hustles; a very fake lesbian kiss; waved cash; body jewelry being ripped out; a magician who dies; Red Riding Hood; strippers with knuckle dusters; fluffy handcuffs; UV in the champagne room; and a body count display. At no point do I see any wigs, which I feel is probably the most unrealistic thing about the film.

I won’t spoil the ending, but I will say that if you wait until after the credits, there’s a cliffhanger which leaves the possibility of a sequel open.

Overall, I give this film five out of ten. There are nods to feminism, stripping and social justice in the film, but these are complicated and marred by horrid lines like “Let’s go kill some strippers!” and credits stating “No werewolves were harmed during the making of this motion picture.” If you’re looking for escapism, I don’t think it’s here; I spent the entire film taking notes, but even if I hadn’t been, I kept waiting for violence like slut-shaming and whorephobia to creep in, which left me feeling distinctly uncomfortable. I think there were elements of these in the film, but nowhere near as bad as I intially expected. I did find the film entertaining at times, without having to suspend my disbelief once. This is a weird example, but because I’m ‘Strayan I’m gonna make it: Strippers vs. Werewolves is like the platypus. It looks like it’s been designed by a committee, and all contributions were valued equally. For the platypus, this has kind of worked in its favor. Strippers vs. Werewolves? Not to the same effect.

Rating the film five out of ten is probably a bit high, but I figure that’s what I’d rate it if I’d watched it with other sex workers, been playing a drinking game, or been drunk. Might I suggest all three?

Dan Bledwich has never been a professional stripper.