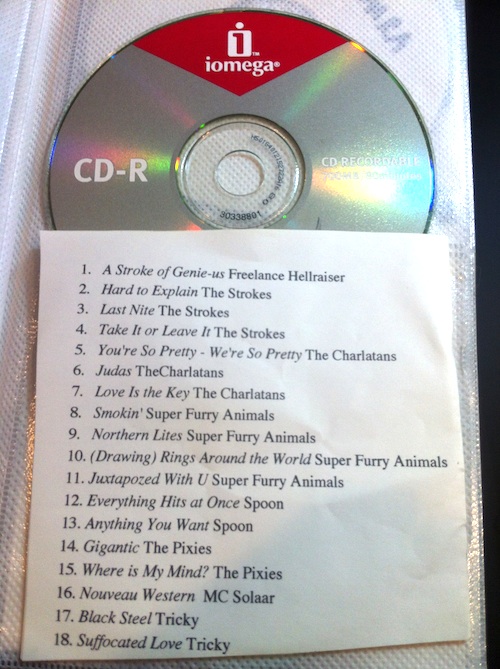 One of my old work booklets sits in a desk drawer because there are still two clubs I travel to where it’s useful. While looking through it for something to listen to in the car, I found the very first CD I ever burned. A smart CompUSA salesguy talked me into buying an external Iomega CD burner for my iMac (2001!) instead of a Zip drive. This is the actual CD that came with it, and a playlist of what I thought I’d like to hear at work (meaning I found it tolerable and it wouldn’t horrify customers), probably made and burned with Roxio Toast.

This Freelance Hellraiser track is the first mashup I remember hearing and possibly the first thing I had to download because I couldn’t find it elsewhere.

Wonderland by the Charlatans was a serious workhorse for me in 2001. This song still pops up in my work playlists from time to time.

The Super Furry Animals put out Rings Around the World in 2001 and for my birthday that year I was given a trip to London to see them play in surround sound. “Smokin'” was the only song of theirs that the titty bar DJs I worked with weren’t confused by.

What’s MC Solaar up to today? And how the hell do you not play a French MC rapping over a Serge Gainsbourg sample at the strip club?

As for the rest of the tracks, well, the Strokes are still around, huh? During SXSW 2001 I bailed out of the line to see them because of severe anxiety/panic attacks (which also chased me out of a large venue before the Soft Boys played, and that is part of why I am attached to my Wellbutrin, because thinking you are going to die every time you are at a rock show is no way to live, and also confusing in a mind-exploding way when you regularly dance naked in front of people with no such anxiety). Those Pixies songs are on there because after Fight Club used “Where Is My Mind” they became recognizable in the strip club. Those Tricky tracks should have automatically been on every strip club computer everywhere. Listening to Spoon’s “Anything You Want” is a reminder that in 2001, eight years into it, they were just getting started, and that Sound Exchange was still open. It was the first place I went when UT classes stopped on 9/11.

If anyone reading wants to contribute classic work mix CDs, please speak up. I’d love to see what your playlists from 5-10-15 years ago look like.