TITS AND SASS SERVICE JOURNALISM BY AND FOR SEX WORKERS
Home Money So, What’s Your Real Take-Home? 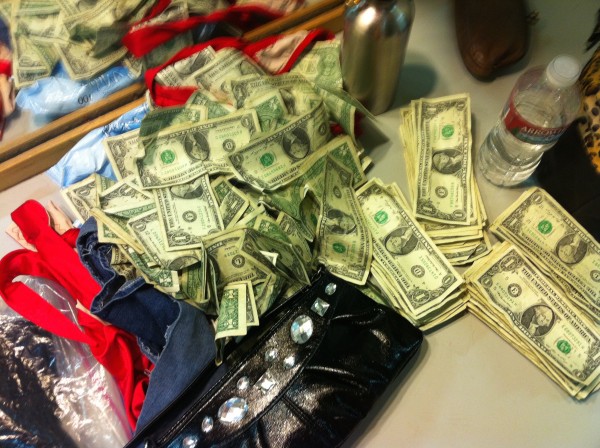 “What’s your real name?” is the question most commonly asked of strippers. The second? “How much money do you make?” There have been quite a few articles written on the subject of stripper income, and the most recent ones all seem to cite one University of Leeds study, a stripper named Menagerii’s Reddit pic of her best haul ever, and several months of income tracking that I posted on my blog which generated a bit of conversation.* Pretty scant resources. There’s also the occasional boomtown news article that suggests there’s a pot of gold up for grabs by women willing to undress in whatever city is most recently the site of oil drilling or a large sporting event.

Recently, ABC News ran a segment on college students who dance to pay tuition. In that segment, this well-spoken and good looking gal named Maggie claimed to make $180,000 a year dancing on the weekends. Because I once shared my monthly income with the internet, Huffington Post writer Arin Greenwood e-mailed me while she was working on this story to ask if Maggie’s figure seemed reasonable. I told her anything was possible, although that number was high. But more importantly, I wanted to know why everyone was so interested in how much strippers make.

Strippers don’t widely announce their earnings publicly. When I first posted mine, I looked around to see if any of the many stripper bloggers were doing the same: nope. Though there are a few who will publicize a good night’s haul, very few seem to discuss their low nights, or even just their daily averages.

The reasons are many, with the most notable being that talking income is taboo. It’s usually a private and closely guarded topic for people across all professions. Also, being a stripper means you get that extra dash of judgement when you do confess. Too low a number and folks get all hot and bothered about degradation and how you should probably just work a “regular” job, without any recognition that there are other perks to being a dancer (working nights, setting your own schedule, drinking on the job, camaraderie, etc.). Too high a number and they think you don’t deserve it or that you’re definitely doing more than dancing. And if you’re sharing income numbers with another dancer, you are treading on mighty thin jealous-ice because, you know, you’re all doing the same work and it’s just human nature to want the same reward for the same work.

Meanwhile, it’s difficult to get widespread statistics on dancer income. Strippers work in a cash-based self-employment industry, so there aren’t salary statistics. Many might not be declaring their stripping income—which, of course can be a bad idea, but it’s also understandable considering that it can be scary to out oneself to an accountant. When I did file my taxes during my dancing years, I had an open-minded, wonderful accountant who helped me file as a “personal consultant” because I didn’t want to tell the government about my actual job,  just in case I wanted to become president some day. So, just getting all the tax records on strippers wouldn’t work because I’d wager a good few more than me also don’t write down “stripper” as their occupation.

Even if you could get accurate information on all the strippers’ take home in any particular country, do me a favor and don’t get stuck on the average figure. The University of Leeds research published an average annual stripper income of $74,000 which is unhelpful because it’s likely to be perceived as the most common or likely stripper salary.

Let me ask you, what is the common income of a salesperson in the USA? You should answer: “What a silly question. That depends on what they’re selling, how they’re selling it, what they will accept and what the current supply and demand is for what they’re selling.” Even though it may seem that all strippers are selling essentially the same thing, having worked all around the country in different clubs with a variety of women, I can guarantee you that what’s being sold, how much it’s desired and what amount of compensation is acceptable to any particular dancer is all over the board.

Hence, the range of salaries and the amount of dancers within each range bracket, and how long they hold that income steadily would be a far more interesting set of data points than  average earnings. All of this should be paired with geographic and demographic data as well, because I’ve worked in backwater towns and big cities and location makes a difference. As far as I know, those numbers have not been collected. Masters’ or Ph.D. students, get on that.

It’s time for outsiders to stop getting excited about one or two strippers who post their income or moralizing on the numbers related to their work (see the comments sections on any of the linked articles). What each dancer defines as an acceptable range of income is a personal decision. Some just want supplemental cash, others need to pay rent tomorrow, and others engage in constant cost-analysis about their alternative earning options.

It’s an interesting idea for strippers to come together and share their income because I know from having once been a newbie stripper myself that a point of reference is always helpful. Additionally, as a collective stripper workforce, I don’t think it serves us to hide the value of our income. In fact, I think it hurts us. By speaking plainly about what we make, new dancers can learn how they are doing in relation to their coworkers and in relation to workers in different clubs across the country. If we have a collective idea about what we should earn we are more likely to demand it, refusing to settle for less and leaving a club when/if it doesn’t reach those income standards due to forced tipouts or low demand. Right now the folks with the most know-how about what we earn aren’t the IRS or even ourselves, they are our managers—which is troubling.

Finally, back to Maggie. She threw out a figure large enough to attract attention. As Ms. Greenwood mentioned in her article, “That’s a lot of money! Not to imply that the adult entertainment industry trades too heavily on fantasy, but can exotic dancers really bring home nearly $7000 in a weekend?” Of course they can. But it is not common or likely. It’s important to remember that anything is possible with some dedicated regulars, but the possibility of sustaining such a figure seems low.

What amazes me is not how much Maggie earned. It’s that this random college lady, Maggie, got a whole article written about her questioning her veracity. Who cares that this woman is making $180k? Why is it so important to disprove that figure? She is brave to announce her job considering society’s hang ups with sex work. But instead of celebrating her courage, here the media comes to rip her apart. Meanwhile, let’s say she did make that much money on the weekend. Bravo. Stripping is hard work. Let’s say she’s being dishonest, maybe because she feels she has to justify her work to a world intent on shaming her. She’s getting a lot of attention for…falsifying her salary. What if someone in another profession did this—would anyone care?

If she’s not being truthful, the only legitimate reason to object is that it is irresponsible to make that figure seem like an easy reach. Most dancers do not make that much money and stripping is emotionally and physically demanding. Wannabe strippers should get a more realistic picture of the job than a tempting salary figure like Maggie’s. So whether she’s telling the truth or not, the main point for non-strippers to take away from this is that it doesn’t mean stripping is easy, lucrative or necessarily worth quitting your day job for. And the only people who really ought to get their panties in a bunch about how much strippers make are strippers.

*My own blog is now private due to my current non-sex work activities and the fact that I live in a society that stigmatizes strippers. I posted exactly seven months’ worth of earnings and all the articles that cite my numbers draw from only three months of what I reported. My worst night I made $12 and my best night I made $1000.↩