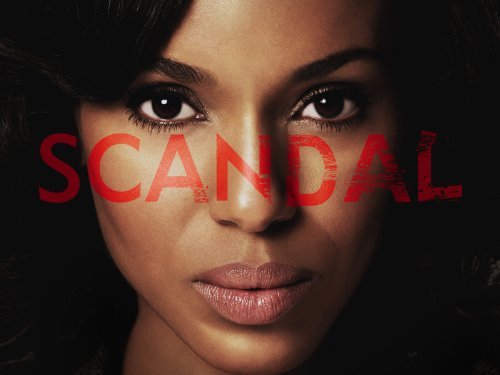 In spite of Kerry Washington’s awe-inspiring beauty, I really wasn’t interested in watching Scandal, a show about a crisis management firm in Washington DC who works to save reputations and careers when damning personal histories are about to come to light. My boyfriend bought it on AppleTV, though, and like the manipulative man he is, played the second episode one night while I was next to him on the couch. And it had hookers in it! So I was all in. The episode begins as several of head honcho Olivia’s (Kerry Washington) employees are clearing a woman’s home of all relevant and incriminating evidence, beating the police by mere seconds. Who is this conservatively-clad woman evading the police? Why, she’s “DC’s finest madam,” and she’s sipping tea at Olivia’s huge, superhero-y work loft, waiting for her client list to be safely delivered back into her hands.

The first ten minutes of this show are like one of those joke cans that explode with fake snakes. So much to discuss! Snakes everywhere! The prudish, bitchy, redhead lawyer, Abby, goes on an expository rant that includes a dig at the real name of the arrested prostitute, Ginger Bell, (“like [her parents] planned for their kid to be a hooker”) who set off the police investigation, as well as a comment about how Ginger “sang like a little bird—a bird who has sex for money,” because it is a big deal for Abby that other women engage in sexual labor. Abby is a great character because there are so many Abbys in real life, meaning there are so many women who are infuriated by the mere existence of sex working women. We can speculate as to why this is. Maybe they’re jealous of the freedom afforded, the money made, the circumvention of more socially sanctioned forms of male-female interaction, or maybe they’re threatened because they worry about their own partners paying for sex, or whatever. Who cares. Abby sucks.

Cut to the madam, who, having finished her tea, is musing on how hard the first night is for girls because even though it’s “a lot of money” it’s “still a transaction.” She adds a sinisterly delivered line about how the girl has to bring the money back to her afterwards, as proof that she can go out again “the next night…and the night after that…and the night after that.” Mwah ha ha ha. Having sex with one man a night! The horror. Come on, they’re not working every night unless they want to. And the money isn’t important because it’s proof—it’s important because it’s money, and you want your 50% cut.

Anyway, Ginger Bell was arrested in the lobby of the Hay Adams, and you can tell the writers are proud of themselves for name-checking one of DC’s most elegant and long-established hotels, but it doesn’t make sense. I cannot imagine how out of control you have to be acting to be arrested in the lobby of any hotel, and Ginger would have already had a date scheduled, so she wouldn’t have been soliciting. Why would the hotel staff be messing with her at all? Even if she were drunk or looked kind of slutty while she was loitering, they’re not going to create a scene in their own lobby (which is tiny, btw.) Nor are they going to piss off one of their rich clients by getting rid of his nighttime entertainment. I’m living proof that hookers can stride in and out of the Hay Adams without getting arrested so don’t stress about it, ladies. They’ll even hold the door for you, and the elevators don’t require room keys.

Back to our good friend Abby, the type of terrible shrew who (I hope) reads Tits and Sass to make her own blood pressure rise. Abby is obsessed with “whores” and she uses the word liberally, particularly to hurl insults at one of her fellow lawyers who used the madam’s service in the past. I’ve watched the beginning of this episode 3 times now with about 50% of my attention each time, and with 150% of attention total, I still can’t find the moment when Abby learns that Stephen, one of her coworkers, is on the madam’s list. But boy is she up in arms about it. Later, she asks another one of her coworkers, Harrison, why a man pays for sex. He replies that “everyone pays for sex” and goes on talk about the cost of taking a woman on a date. Abby keeps pressing and finally he says, “so they never have to have a conversation like the one we’re having right now.” I think what he means is “so they don’t have to have any conversation with you ever, Abby, because you are the worst.”

I feel bad for Abby. She’s shrill and close-minded and her energy is pure boner-killer, though to her credit she’s not completely horrible when she approaches a mom in the park to ask her about her past as a call girl. (Why would she approach this woman in public? And with her children right there? How did the crisis team know the mom would be in the park? Shhh, let’s just go with it.) Later, Abby asks Olivia, “why does a man like that, an attractive man with nice clothes and a good job and…wavy hair… [see prostitutes]?” It’s painfully clear that she’s crushing on Stephen, and she’s hurt that he would rather pay a girl for action than have it for free with shrill, shrewish her. This chick would be so improved by a month of working at an incall with some other ladies. She needs sisterhood like woah.

Overall, the show deserves credit for how nonchalantly it treats prostitution. Abby plays the role of the judgmental killjoy, so everyone else can be relaxed and cool with it, and the guys in the office can act like it’s common knowledge that “sunny day” is code for “no raincoat needed” WINK WINK and that “hardwood floors” mean “no carpeting…as in, to match the drapes.” (That rivals The Girlfriend Experience in levels of cluelessness. DC’s finest madam can’t invent a tighter code than the same euphemistic crap found on hobbyist message boards and Backpage ads? We’re also expected to believe she writes “speaks Greek” next to the name of every girl who does anal. Why even bother, at that point? Better to write “TAKES IT UP THE ASS WITHOUT A CONDOM” in neon orange and be done with it. Though I also have some trouble believing DC’s “finest madam” is sending out women who have regular unprotected sex to these high-paying, married politicians.)

Furthermore, everyone else in the show accepts that paying for sex happens frequently and is a consensual activity between two adults. The madam is given a sympathetic backstory of how her daughter refused to talk to her for 10 years after she found out about her mother’s work, and there are frequent references to her estranged grandchildren. The former escort approached in the park has children now, and she’s as average and normal looking as any middle-aged mom. Olivia diplomatically says, of the men who hired the women, “everybody has secrets. I don’t judge.” And the madam voices support for her clients by saying “most of the men on that list have grandchildren too.” The episode is predicated on the assumption that making the client list public is a pointless violation of privacy and would create needless damage to the lives of otherwise good people, which is a sadly radical viewpoint. We, the viewers, are understood to be on the side of the madam and the (former) prostitutes and current johns.

There’s also the somewhat progressive twist that (spoiler alert) the Supreme Court nominee whose name is on the list was financially supported by his wife through most of her career; she worked as an escort and put him through law school. The reasoning required to get the judge’s name on the list is convoluted at best—his wife was out on her first night and waiting at the bar for a late john when her future husband approached her and they hit it off. The wife knew she had to bring back money to the madam, or else she wouldn’t be sent out another job, so she paid for it herself. (The madam didn’t have a call system set up with the no-show john? To ask him how it went afterwards with her brand new girl? Pull the other one.) Then every time she saw him in the future, she also paid, and that makes even less sense. Plausibility be damned, the wife comes clean to Olivia, who nods sympathetically at hearing that she was “a call girl…not a whore” and then convinces the wife to tell her husband about her past. We eventually see them at a distance, while the husband—the evil vet from Beethhoven, it must be said—yells at her.

Then Olivia gathers all the high profile johns in her Batcave and convinces them to approve the mean, evil vet nominee in return for the list being kept private, and the charges against the madam are dropped, so she quits the biz and moves to Florida. A relatively happy ending, except maybe for Ginger Bell? And Abby, who lives on to hate whores for another day.