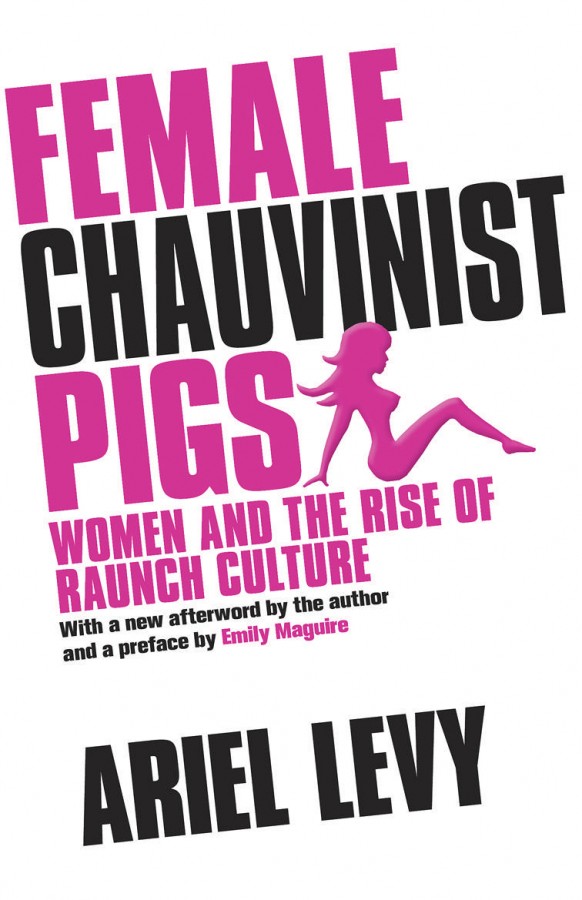 I can’t quite say I disliked Female Chauvinist Pigs—though as a sex worker I feel like I should, as it grossly misunderstands and oversimplifies my industry. Author Ariel Levy discusses how women’s participation in modern “raunch culture” is a step backwards for both feminism and the sexual revolution. While earlier generations focused on sexual freedom as related to pleasure and intimacy, the supersexualized post-Girl Power years seem to be more about sexual commodification and performance. As Levy says, “The glossy, overheated thumping of sexuality in our culture is less about connection than consumption.”

Levy brings up good points about the way that mainstream society has appropriated the sex industry, and how women have began imitating the douchiest of men in their objectification of one another. She talks about misogyny within lesbian and trans communities, and some of the general failings of the modern feminism and the sexual revolution. “Raunch” poses as a result of  both movements, but actually betrays them. According to Levy, “This is not a book about the sex industry; it is a book about what we have decided the sex industry means … how we have held it up, cleaned it off, and distorted it.”

For example, in chapter one, Levy dives into the Girls Gone Wild phenomena, in which garnering frat boy praise is reward enough for behaving like a stripper. She interviews straight girls who make out with each other only for the camera—and only for free. From there, Levy moves on to Playboy, which has a rapidly growing number of female subscribers. Levy chats with then-CEO Christie Hefner (daughter of Hugh) about the magazine’s increasingly female readership. Hefner argues that women’s interest in the magazine, both as models and consumers, relates to a desire to take control of their own sexuality.

Levy doesn’t buy it. “There are some women who are probably genuinely aroused by the idea or the reality of being photographed naked,” she writes. “But I think we can safely assume that many more women appear in Playboy for the simple reason that they are paid to. Which is fine. But ‘because I was paid to’ is not the same thing as ‘I’m taking control of my sexuality.”

Well, sometimes it actually is.

Through six chapters, Levy never quite acknowledges the idea of marketing one’s sexuality as a potential form of empowerment. No, not pretending to market your sexuality (for free, ala Girls Gone Wild), but actually taking the task seriously and getting paid. Selling your sexuality, under the right circumstances, can be the ultimate way to take control of it.

I’m not the only sex worker I know who says their work has made them less promiscuous in their personal life, and more conscious and deliberate in choosing sexual partners. Before becoming a sex worker, I was much more likely to find random offers of male attention to be gratifying, flattering, thrilling. Now I find it mostly obnoxious, because I know how easy it is to get, and how much I could be getting paid to receive it. I’m more sexually confident than ever, in terms of seeking out what I want and avoiding what I don’t. Commodifying myself has given a very real, tangible value to something I used to share much more easily. Without adopting a moralistic approach to my own sexuality, I realize its value and preciousness—not in terms of Christian virtue, but money. I have always found this empowering.

But disappointingly, Levy chooses not to speak with sex workers in a book that’s all about “what the sex industry means.” She does quote Melissa Farley, however, about how sex work breeds PTSD in its participants, and how likely we are to have recurring nightmares about our work. My first thought on this is that it’s true: I’ve definitely had nightmares about sex work. My second thought is how I’ve also had nightmares about every other type of work I’ve done. When I was a waitress, I would have dreams about it being midnight in the restaurant and I had five or six hours of closing work left to do. Similar nightmares about impending deadlines and not enough time plagued me when I was a college student and later a magazine editor. When sex/sexiness is your job, it’s not pleasant all the time—but I’d argue that the same statement holds true if you substitute “sex/sexiness” with anything else in the world that is done for financial profit. How do these nightmares, these instances of PTSD, compare with what other working-class people experience when reflecting on the less appealing moments of their work?

“Sex workers are workers. They are having sex, just as strippers are stripping and centerfolds are posing, because they are paid to, not because they are in the mood to. The vast majority of women who enter the field do so because they are poor and have no more attractive alternative. … For the rest of us who are lucky or industrious enough to make a living doing other things, sex is supposed to be something we do for pleasure or as an expression of love.”

A couple points on this:

I could understand the perspective that sex work could be empowering to an individual while damaging to women’s place in society as a whole. I’m not going to agree, but I’ll admit that it’s a point that’s at least worth listening to and arguing against. Unfortunately, Levy doesn’t stop there, but dives into stereotypes and clichés with Melissa Farley. We’re all dumb and lazy and raped, I get it. The final chapter was full of the same familiar, frustrating and tired stats that journalists recycle on a daily basis whenever they have an excuse to mention prostitution in a story.

Yes, sex work is a job, it’s true. “Work” is the noun, “sex” is attributive: put them together, and it’s more about work than sex. Levy wants to think this s is some big revelation, some groundbreaking act of investigative journalism. Really, she could have figured that all out if she talked to a sex worker for about 30 seconds: No, I’m not actually turned on when I give a lap dance, I’m not attracted to any of the customers, and the most empowering thing about my work is the money. You caught me; it’s just a job and it’s not that sexy to me most of the time. I’m not crying myself to sleep over it.

I understand wanting to discourage civilian girls from imitating sex workers for no good reason, essentially putting on a free show for dudes under the misguided guise of “empowerment.” I personally wouldn’t be stripping if money weren’t involved, and I certainly wouldn’t claim sex work to be empowering if it weren’t, you know, work, with inherent financial implications. So while much of Levy’s analysis rang true for me, it’s disappointing that she chose to silence and discredit the women at the core of her thesis.