TITS AND SASS SERVICE JOURNALISM BY AND FOR SEX WORKERS
Home Blast From the Past Motor City Strippers! 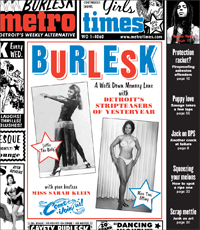 Her stories about racism were depressing, but the fact that she doesn’t dwell on them made me smile quite a bit. If she can rise above being called a “walking chocolate bar” by a kid who’d never seen a black woman before, or having another woman’s boyfriend deny that she was a headliner, maybe I can be a little bigger too. She also mentions feathers upon feathers upon feathers. If you’ve been reading my reviews you know I love a bitch in feathers; it warms my heart.

Toni Elling’s story is just as grand. I mean, she name drops like a pro. Sammy Davis, Dinah Washington, Duke Ellington (who she got her name from and whose protege she was); she met everybody! She does tell a story that seems like it could have happened today though. Apparently some guy felt compelled to rip off her pastie while she was dancing, then stood there and handed it to her with a smile on his face. Where do guys get that from? Naked body parts are not asking to be grabbed at, touched, or filled, for that matter.

The article goes on to detail how the “art” became what it is now, something mostly different from the days when a naked nipple could land you in jail, or a g-string malfunction wasn’t on purpose. But we needn’t dwell on that, right? Read it here!