TITS AND SASS SERVICE JOURNALISM BY AND FOR SEX WORKERS
Home Interviews Hole Survivor: Meet the Woman Behind Portland’s Most Beautiful Vagina

The 3rd Annual Vagina Beauty Pageant was held at Portland’s Club Rouge on July 19th, 2012. Kat covered the “vageant” for Tits and Sass last year if you’re having a hard time believing this really exists. We spoke with the proud owner of this year’s prettiest vagina, miss Atlas of Golden Dragon Exotic Club.

So, was this your first time doing any kind of competition?

Yes, this was my first time ever competing in anything and I was so nervous!

How long have you been a stripper?

I have been stripping for five months.

Was this your first time at Club Rouge? What was your impression?

This was my first time ever at Rouge. I loved the inside and the atmosphere, the girls were very sweet and welcoming. I just wish they had spinning poles.

So the morale was good?

Oh yeah. Actually, I had no idea what to expect. I didn’t know that we actually had to perform, so I didn’t have any kind of set planned. There was a girl who poured hot wax on herself, she had a theme. I kind of freaked out, so I grabbed a water bottle and just used it onstage, pouring water on myself. I danced to Twista’s “Wetter.” But it was so last minute, that I didn’t have much to wear, and the other girls actually loaned me some things!

Your competition lent you clothing?

Yeah, a bra and some stuff. I was so unprepared. I really didn’t know what to expect, so I hadn’t brought a thing. It was super sweet, everyone was so nice. 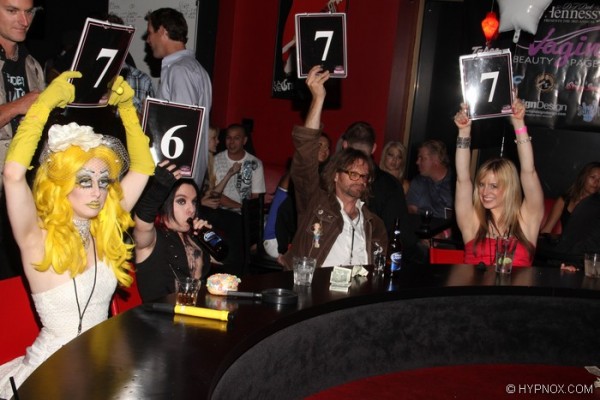 I heard that one girl (Portland comedian Rochelle Love-Cox) did something with deli meat… care to elaborate?

Oh dear [laughs]. It was very diverse, I’d say. She stuffed her thong with roast beef or something, and dangled it around. On each side of the stage, she had two guys squirt her crotch with mayonnaise.

Wow. I’d hate to be the one to go on the stage after that. Sounds… messy.

I personally almost got sick [laughs], but she has some courage and she stood out and that’s all that matters.

What was the prize?

A $700 check! It said “Club Rouge” on it. But I actually was standing in the go-go cage for a while before the competition, and the owner of Rouge came over to me, he threw a hundred dollars at me, and said that he just wanted to make me smile. Also, a lovely gift basket and a trophy.

Yeah. He told the DJ before the competition, that instead of using my dancer name, “Atlas,” that he was going to call me “Drip.” Which worked with my song, I guess!

So, obviously I have to ask. What does your vagina look like?

Did you have fun?

I honestly had a blast, the girls were fun and the judges were awesome. It was a great night.

Where do you dance, and how can customers find you?

I dance at Golden Dragon on SW 3rd Avenue, Thursday through Sunday evenings.