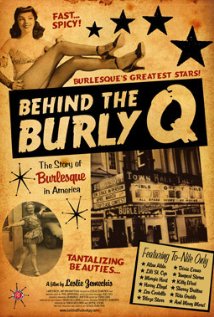 Leslie Zemeckis (wife of director Robert) released a documentary about a year ago called Behind the Burly Q: The Story of Burlesque. I haven’t seen it yet, but maybe I will some day. Burlesque seems cool from what I know; I’ve only seen a little bit of it, but am interested in watching talented dancers, whatever genre they’re in. I’ve definitely heard burlesque girls trash-talk strippers, but so do most people, so it’s not like I hold the entire burlesque community accountable for the words of a judgmental few.

Bill Gibron of PopMatters posted a review of the documentary last week. He engages in some pretty gratuitous stripper-hating that appears irrelevant to the film, while unknowingly clarifying many of the similarities between the worlds of sex work and burlesque dance.

Bill briefly chronicles the defiling of burlesque: “By World War II, it was considered upscale, sophisticated entertainment, viewed as viable family fare. Afterwards, it catered to the more mature needs of a returning male clientele. By the late ’50s, it was already showing signs of pornography’s sour patina. Today, we mistake strippers and their skanky ilk for same. What the women of Leslie Zemeckis’ thoroughly entertaining documentary Behind the Burly QW [sic] – The Story of Burlesque want you to know is that Burlesque was never about sex. The carnality was purely commercial, just part of a way of getting otherwise reluctant patrons to part with their hard earned (and desperately needed) cash.”

So I’m to understand that burlesque dancers, like skanky strippers, do put on sexy shows. Unlike strippers, however, burlesque performers are actually not that skanky because they’re only doing it for money. It’s one of the most illogical, backwards statements ever. First of all, most critics of sex work, be they misguided and judgmental “sex-positive” burlesque dancers or second-wave feminists who seem to think almost any nude female performance is inherently degrading, will point to financial dependence as the primary thing that keeps sex work from ever being empowering. I guess I can get behind that on a general anti-capitalist platform (the same one that says your cubicle job is degrading), but that’s not how either of these two groups usually mean it. The point from anti-sex work feminists is that men in our society hold the purse strings, and that entertaining them sexually for money is inherently demeaning and dehumanizing. They believe it’s only done under some level of desperation (unlike your job filing papers, right?). Some burlesquers distinguish themselves from strippers particularly because their work is not financially motivated; it’s pure performance. It most likely pays poorly, if at all, and so a performer would have no reason to waste her time unless she was enjoying herself.

Gibron tries to subvert this somehow by deliberately ignoring the fact that strippers are queens of purely commercial carnality. That’s why people call us whores in the first place—don’t you get it? Otherwise we’d just be sluts. It’s not that we’re just really into sex, we’re into money. If being sexy gets us money, we can do that. If being frumpy was more lucrative, I’d probably do that instead. And I’m not quite clear on how desperation dissipates skankiness.

And seriously, Bill, do you expect us to believe that you’re mourning the days when burlesque was “viable family fare”? Were you really watching the documentary hoping to see more of that? If so, it’s curious when you later make this statement: “Many see [burlesque performers] baring their breasts and come to some rather close-minded conclusions.”  Because I kind of think you already did that about strippers.

Gibron then naively states all sorts of factoids about the burlesque world that might as well have been said about stripping, such as, “It was a stopover between career paths.” Again, desperation rears its bizarrely self-validating head, as Gibron gets into the paucity of career options for women at the time that burlesque was developing: “They were either forced into nominal secretarial or clerical work, waitressing, or relegated to rooting out a potential husband. Burlesque offered a chance for capable gals to support themselves, often making much more money than they could ever achieve in the stiff, square world.” That sure does sound familiar. If only I were a little more financially desperate maybe I wouldn’t have to be a skank.

He delivers one more dig to my skanky ilk before signing off: “It is clear that the contemporary mythos about lap dancing divas selling themselves to men for champagne and $20 bills is what really killed off burlesque. However, only a fool would confuse today’s acrobat pole dancer and the sophisticate swagger of Sally Rand and her fabulous fans.”

“I also think it’s funny how quickly many burlesque performers denounce our pole dancing sisters, calling burlesque “the good stripping” and similarly distancing themselves by calling stripclub dancers “strippers” and themselves “burlesque dancers” or “burlesque artists”, when to my way of thinking, the current strip clubs are a lot closer to the original environment and performance intention of the “original” burlesque than the neo-burlesque shows of today. In the heyday of burlesque in America, women were booked into the burlesque houses to perform sexually titilating (and according to the views of the time, lewd and indecent) acts, displaying their bodies in as little clothing as possible without getting arrested, all for the benefit of a horny male audience. These women were exotic entertainers, performing as a way to make a buck, not in the interest of furthering their feminist ideals or promoting body positive environments or challenging the status quo. … I feel that the poledancing stripper and the burlesque artist of today are equally the descendants of the classic burlesque dancer of the 1950′s, though they have evolved in very different directions.”

It’s the people who praise certain forms of disinhibition while using it as a platform to demean other sexual libertines that really annoy me. If you want to sit around moralizing about sexuality, then go all-out and own the fact that you’re a judgmental prude. Admiring the women who wear pasties and reviling the ones who don’t is ridiculous. It’s common misogynist behavior to try to pit groups of women against each other, and create an atmosphere of animosity and judgment where it may not exist—or at least is a minority of voices among women who generally support one another. Not unlike the guys who come into the club and eagerly ask which of your coworkers you think is a “bitch.”