TITS AND SASS SERVICE JOURNALISM BY AND FOR SEX WORKERS
Home Prostitution An Excerpt From Pros(e), Issue #1 (2012) 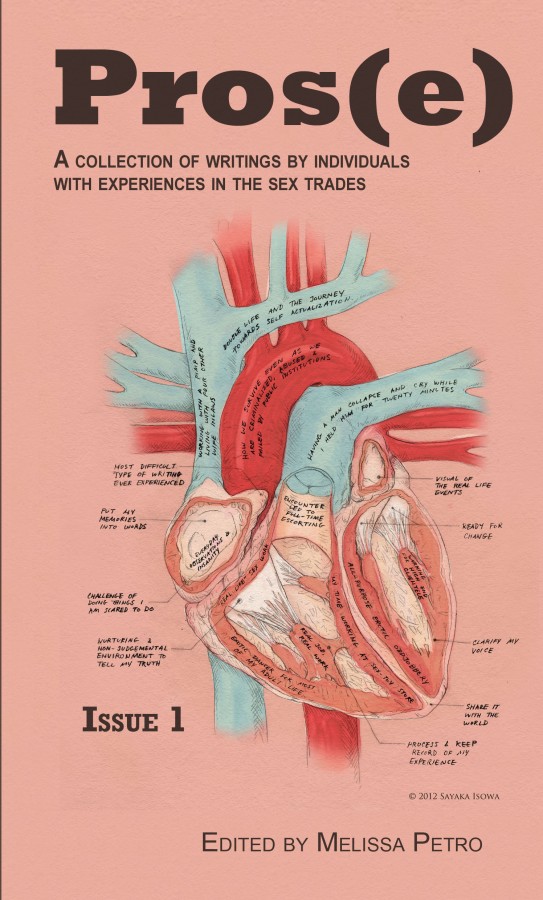 Pros(e) is the Red Umbrella Project’s literary journal, which collects and publishes the writings of participants in their writing workshops. The first Becoming Writers Workshop, which took place in Fall 2012, resulted in this first edition edited by Melissa Petro. You can buy the print and e-book versions of Pros(e) here. They will be running a spring session of the memoir workshop, in-person class in NYC and online. Applications will become available on Feb 19th.

The following is an excerpt from the piece “Notes from the Red Room”, by Kelley Kenney. Kelley Kenney is the nom de plume of a writer and off-and-on sex worker living in New York. This is her first publication, although she’s been keeping journals privately for over twenty years.

I had one session yesterday, at 5:30 . He was a Clark Kent, bespectacled banker dude to the outside world;  pocket Lothario in the Red Room. “Feel that big hard cock,” he instructed me. “Is this cock big enough for ya?” I looked at it. It was certainly medium-sized, and not skinny. I wasn’t sure if it had been a rhetorical question, like when people say “hot enough for ya?” or if he expected a thought-out response. I was momentarily confused, looking at his wielded appendage. “Yes,” I replied, with certainty. It was big enough for me. I dared myself to touch his wedding ring in a way he would notice, thinking of what I wrote yesterday. Doing so was like licking a frozen flagpole, or touching Boo Radley’s house. A dare. I hoped I didn’t smear lube on it. That silicone stuff can be such a bitch to clean off.

I had this Canadian guy recently. “Do you do role-playing?” he asked. “Yes. What kind?” I asked. “You know…I hear you’re an actress…” he began. “I’m NOT!” I interrupted. I’m not. The manager ALWAYS tells guys this on the phone, as if to increase my value: You’re not lining the lazy pocket of a gal who kind of, sort of, thinks-slash-fears she’s incapable of doing any other kind of work—you’re Helping a Starving Artist! Your contribution of $200 and a palmful of your semen, while not tax-deductible, will directly assist in the accomplishment of a young (always, always seven-to-eight years less than the truth. If they guess anything closer, even 26, it feels like a betrayal) woman’s bohemian dreams! You’re a philanthropist, not a philanderer! Nothing selfish about YOU sir, no sir! “Captain Save-A-Ho,” Kristen, a lady who was working here when I first started, called it.

Another sigh here. I am so bad at talking dirty on command. It’s embarrassing. I really dislike saying the word “pussy,” for example, even for money. You can see it; I’ll show it to you. You can touch it, sure. (Wait, did you wash your hands? The city is dirty. You may have touched a subway pole recently. Hang on, let me just grab a baby wipe for you. Paws out, please. There, that’s better. Okay, proceed!) I just don’t want to call it anything, okay? Perhaps I come from the “show, don’t tell” school of sex work. Also, there are different concepts of what “dirty talk” is. If I must, I need a conversation, not a monologue. If a client requests a steady stream of heavy humiliation, after awhile I just run out of things to say. There are only so many word combinations for, like, “you maggoty little particle of pig shit. You little cock-guzzling slut machine,” or whatever, before your mouth gets tired and it’s boring as hell.

He was doing Things to my Parts with his hand, and he said something in Canadianese (about his penis, uncreatively self-described as “big, hard”) and I laughed. I couldn’t help it—sometimes Canadian men sound like Valley Girl teens, with an upward lilt to the end of their phrases. Maybe I felt instantly trapped in some lost Kids in the Hall sketch. “That’s not supposed to be funny!” he said. But it was!

I am reading Secret Diary of a Call Girl. I am envious because (a) it’s published (b) I’m getting a, “is this woman a bigger perv than me?” feeling. When did it become a contest, dear, I ask myself. What would the prize be? A gilded toilet to drink from? Kinkiness isn’t the Olympics.

I had five of the eight total sessions on Monday. It feels good to occasionally get to be the star of the house.

Monday…Two hours with this guy we’d both forgotten I’d seen before, with glasses made of wood—that’s how I eventually remembered him, from the glasses. He kept saying quietly, “what?” during the whole session, as in, what am I thinking. I dislike that question the most. Just ask me where I’m from originally, or the dreaded “what do you do when you’re not here?” or the worse-worded, “what do you want to be when you grow up?” I answer truthfully but curtly, not feeling the need to create a false backstory for myself, but not really wanting a client to imagine me dancing/singing/watching TV on my couch/writing (about them)/visiting my hometown in upstate New York.

My thoughts are my last layer of private property, and you want me to give that up, too? “You want to know what I’m actually thinking?” I said. “I’m thinking about how you look like a priest from the church I went to growing up.” He actually looked like two of them, Fathers Dominic and Bob, middle-aged and heavyset, but well-groomed. Thick-browed and dark-haired, with kind eyes. Italian-American. I really told him this, not caring about his reaction, if he would be put off, or turned on. He wanted to know what I was thinking. He didn’t respond, reached for his suddenly-vibrating phone to take a work call. I crouched by his calves at the foot of the bed, pleased to have to be quiet for a few minutes, moving us closer to the end of the two hours he’d booked. I usually end sessions early. I think forty minutes is plenty for an hour. In therapy you only get forty-five, and no orgasm (presumably).

Who else did I see? It’s really scary how you forget.