TITS AND SASS SERVICE JOURNALISM BY AND FOR SEX WORKERS
Home Movies A Portrait of the Artist as a Young Bathroom Attendant: A Highly... 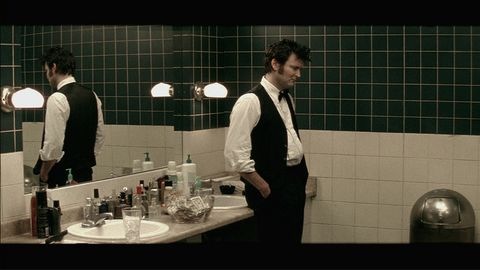 There is a peculiar claustrophobic glory to working in a strip club. The walls hug. The beat of the music holds you in its grasp that is by turns steely and auto-tuned, fuzzy with distortion, jangly with teenage optimism, and tired with oversaturation. The air breathes recycled. The lights flash with epileptic precision. The girls rotate on stage, so many painted ponies. The voice of the DJ booms intermittent like a hawking God, reminding you to tip your bartenders and waitresses. It’s a closed loop, and yet the strip club’s very Möbius nature gives the whole experience a kind of comfort. It may be claustrophobic, but it may also be the only kind of closeness some strip club denizens get.

There are many things about a strip club that George Griffith’s film From the Head portrays accurately, but perhaps the most compelling is the claustrophobia. And yet, one person’s claustrophobia is another’s intimacy, and everything about this film treads the metonymic line between the two states. As the film’s punning title suggests, Griffith set his film in a bathroom. Griffith, who wrote, directed and starred in the film, plays Shoes, a bathroom attendant in an unnamed strip club. He stands sentinel at the washbasin, part conman, part sage, part poet and part priest, and listens as the strip club’s patrons spew their innards, drop their fierce deuces and generally share their secrets. And it’s also one of the few evocations of strip clubs that centers not on the women dancing but on the men watching (Susannah Breslin’s blog of letters from men who go to strip clubs is the other).

This small film has a dizzyingly large cast. Its 60-plus cavalcade is almost exclusively male, and each one of these dudes who parades through Shoes’ bathroom spills something. One is at the club to escape the birth of his first child; he aims to drown his anxiety in “pussy that hasn’t pushed a bowling ball through it.” Another finds solace as his girlfriend’s out of town; he wonders if he’s cheating, and even as he tries to leave the club, he finds himself unable to; he’s stuck. Another, an uptight businessman played with delicate, even tender, neuroticism by Jeffrey Doornbos, tries desperately to unwind, but his deepening affection for Molly, a stripper, stands at odds with relaxation. Suffice to say that each character, individuals all, gets the compassion he deserves from both Shoes and from the film.

From the Head may appear on its surface to be a strip club movie—and it is, faithfully—but it’s really a storyteller’s movie. Each man who visits Shoes has a story to tell, and whether he wants to or not, he tells it. It’s an intimate movie composed of small, quiet, jewel-like moments that embody some tiny, glowing, and deeply human truth. If James Joyce’s Dubliners took place in a strip club, it might look a lot like From the Head. Big praise, I know, but Irish storytelling runs a plumb line through this film from its opening epigram from Samuel Beckett’s Molloy (“Perhaps I’m inventing a little, perhaps embellishing, but on the whole that’s the way it was”), to a passing reference to Joyce’s Ulysses (“What’s the last word in James Joyce’s Ulysses? Yes.”), to Shoes himself, whose voice is equal parts world-weary gumshoe detective and frustrated artist, and whose face would not be out of place near a peat bog.

The film’s narrative rests on a series of tiny acts of humanity, all unfolding in the confines of tile and urinals. This stark landscape is lushly and lingeringly shot by cinematographer Martin Matiasek, and it’s accompanied by rank rock that drifts in and out of the soundscape like smoke. It’s a dreamily textured film where characters come and go, but Griffith is in nearly every frame, and the story is ultimately his, as Shoes and as the film’s director and writer. The narrative turns on Shoes’ ambivalence about his job on this night that “celebrates” his third anniversary, and the question of whether he is stuck working there. He is, as he tells a snooty customer, a product of private school and college education. He works in this anonymous strip club, but he resists becoming a “fixture.” No one wants to be a fixture in a men’s room, at least no one without a strong masochistic strain.

Here’s the kicker: I know George Griffith and I know the club he portrays, and not in an abstract way. I stripped in the club where George was the men’s bathroom attendant, I worked with George, and I was there in the year he set his film: 1995. It is therefore difficult for me to extricate my own experience from the experience of the movie. And yet there is this: for all the self-indulgence of the film (and there is plenty—a few too many references in language and in visuals to the shoes of Shoes; a weak and overplayed turn to hand-held camera in an emotionally over-wrought and vaguely clichéd scene; a cognitive-whiplash-inducing thing where the strength of the film is its intense, nimble and nuanced sure-footedness and its weakness is its occasional ham-fistedness) I can’t turn away from the one human truth that this movie captures about strip club life.

This narrative connection is what From the Head offers, and it’s very good. Irish, even.

From the Head is currently playing on the festival circuit. See it if it comes to a festival near you. Even if you haven’t lived it, this is a solid movie, smartly written, well acted, arrestingly filmed, and ineffably intimate. Its website is the best place to get further information.