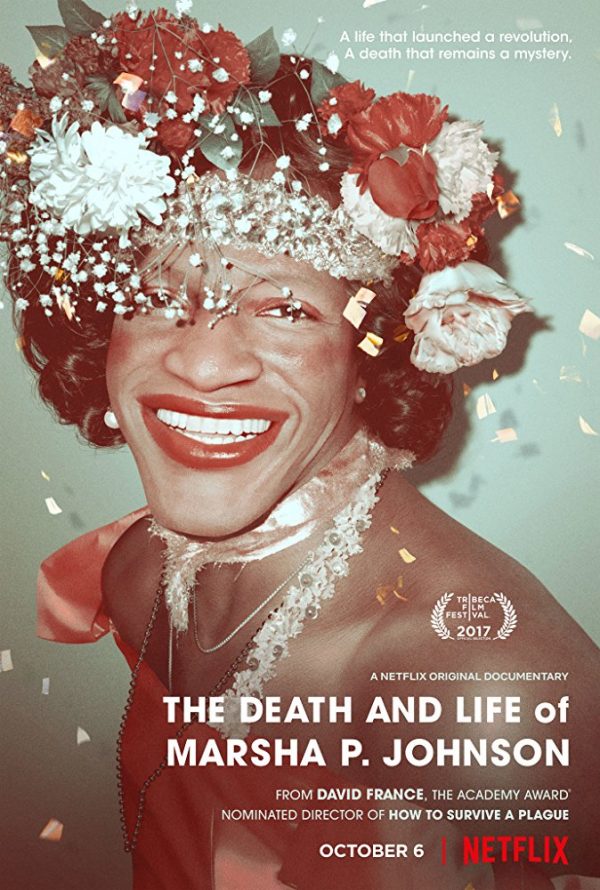 On Friday, October 6th, I settled in for a night of Netflix. But this night of Netflix would be epic, because Netflix had just released the documentary The Death and Life of Marsha P. Johnson, directed by David France. The film follows the investigation into pioneering sex working black trans activist Marsha P. Johnson’s 1992 death by members of the New York Anti-Violence project. It also chronicles the trial of the murderer of 21-year-old Islan Nettles, a young black trans-woman who was killed on August 17, 2013. After watching the documentary, I grabbed my phone and went on Facebook, and immediately saw a screenshot of a disturbing post on France’s documentary by Reina Gossett on her Instagram.

Reina Gossett is a black trans woman activist and writer as well as the producer of Happy Birthday Marsha. On her Instagram that day, Gossett spilled the tea and accused David France, a white cis-gay man, of using and being inspired by a grant she and Sasha Worzel wrote to Kalamazoo/Arcus Foundation Social Justice Center for a movie about Johnson—France volunteered at the foundation at the time. Gossett also accused him of plagiarizing their language and stealing their years of research on Johnson and Sylvia Rivera’s community organization STAR (Street Transvestite Action Revolutionaries) and having her video of Rivera’s revolutionary and mainstream-gay-movement-critical 1973 “ y’all better quiet down” speech at the Christopher Street Liberation Day Rally removed from Vimeo. Gossett began her Instagram post by writing, “this week while I’m borrowing money to pay my rent, david france is releasing his multimillion dollar netflix deal on marsha p johnson.”

Author and activist Janet Mock hit to Twitter and tweeted out the screenshots of Gossett’s Instagram post. Mock stated that “[f]ilmmaker David France released a Netflix doc Friday about Marsha P. Johnson. It is based on Reina Gossett’s work”. Mock’s tweet garnered 1000s of retweets and likes, as well as a comment by France, which he had to write on an Apple note and screenshot to Twitter. (Sometimes 140 characters isn’t enough to explain your white privilege and entitlement.) France also released a further statement responding to Gossett’s Instagram post on The Death and Life of Marsha P. Johnson website. He states that he was friends with Marsha for a minute and he wanted to do a documentary about her around the time of her death but he had to focus on the AIDS epidemic at the time. He also claims that his work was not stolen from or inspired by Gossett’s research and film making. He goes on to acknowledge his privilege as a white cis gay male. 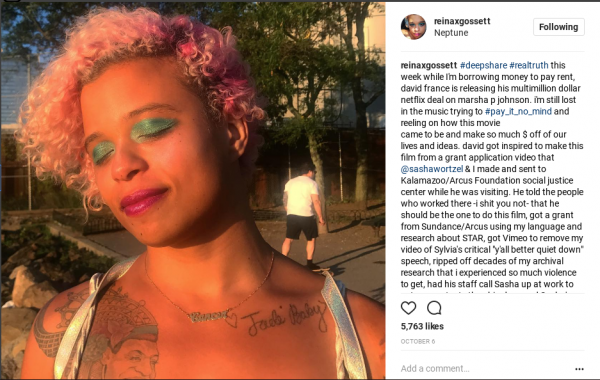 Here’s the thing: It’s great to acknowledge your privilege, but if you don’t also use that privilege to make way for marginalized people, you are part of the system that oppresses and marginalizes individuals like Gossett. To truly acknowledge privilege is to not be silent when confronted with racism and transphobia. France, you wrote that you have witnessed the racism and transphobia Gossett faces, but you remain silent and benefit from it.

So many times the lived experience of trans women of color is co-opted by the white gay movement with no recognition of its source. Just like Reina Gossett had her work on Johnson used, claimed, co-opted, whitewashed, and stole, Johnson herself had her place in history whitewashed and erased. To many trans-women of color, Marsha P. Johnson’s role in history is invaluable. Many individuals credit Johnson with starting the Stonewall riots: she took off her shoe after police raided the Stonewall Inn and threw it at the window of the building where police were barricaded inside. Yet this part of  Marsha P. Johnson’s life—where she made LGBTQ movement history—was not included in David France’s documentary. That’s no accident: that omission promotes the lie that it was white gay men that led the way at the Stonewall riot rather than trans people of color like Johnson, Rivera, and  Stormé DeLarverie.  It is my belief that it is important for people like Reina Gossett to tell the stories of other black trans women rather than have white men tell them for us, so that we don’t forget what Marsha P. Johnson did that night.

Reina Gossett, I believe your truth. I would not sit and be quiet while someone takes credit and makes money off your work—your sister, Monica Jones.