A provocative critique of anti-trafficking celebrity spokesman Ashton Kutcher and the rescue industry complex penned by sex trafficking survivor (and Tits and Sass contributor) Laura LeMoon is making the rounds. Predictably, white people are pissed. “Kutcher is just trying to help!” exclaim my white, cishet acquaintances on Facebook, clearly missing LeMoon’s point that “being a good ally on the issue of human trafficking means listening, not talking.” LeMoon also offers a relevant take on the racialized and racist narratives inherent in much so-called philanthropy:

“The savior complex that activists and ‘allies’ typically display is particularly important to be examined through the lens of the white savior complex. It is no coincidence that most of these so-called allies are, in my experience, upper-class white people who seem to continually distance the realities of sex slavery from themselves and reward their egos through the integration of racist stereotypes that they often promulgate as justification for their domination and supremacy in the movement.”

Many of these philanthropic organizations associated with white savior complexes claim a feminist mission, which is why sex workers, particularly sex workers of color, have been some of the most vocal opponents of white feminism. White feminism, especially feminism that actively excludes trans people (Trans Exclusionary Radical Feminists, TERFs) and sex workers (Sex Worker Exclusionary Radical Feminists, SWERFs) is steeped in white supremacy. TERF and SWERF perspectives are reliant upon the preservation of white womanhood, which is always maintained at the expense of people of color. This is why Brittney Cooper writes that “[w]hite women have been some of the worst perpetrators of racial aggression and racial indignity in this country, but their aggressions frequently escape notice, precisely because white womanhood and the need to protect it animates the core of so much white supremacist aggression toward Black people.”

The inherent racism of white womanhood escapes notice precisely because doing white femininity entails curbing accountability. Eschewing agency, especially sexual agency, is essential for the performance of white womanhood. It’s why so many white feminists harbor disdain for sex workers—sex workers put a price on performances of femininity which are typically demanded of femme-presenting people for free and without full consent. Think of it this way—there is a reason Christian Grey is not a Black man. Rape fantasies like 50 Shades of Grey appeal to white women because doing white femininity means abating all culpability. White womanhood fetishizes submission to white men because it allows white women to skirt responsibility for all things unbecoming a “good girl”— namely, again, sexual agency. The toxicity of white womanhood is evident in TERF and SWERF feminisms; I’m sure I’m not surprising any Tits and Sass readers with my analysis thus far. What receives far less attention, at least in circles of predominantly white cis sex workers, is how we—white cis women—propagate the institution of white womanhood at the expense of marginalized sex workers.

Let me be clear—I am a white, cis, former sex worker. I have a straight job these days. I experience a great deal of privilege on a day-to-day basis, even as a queer person who is also a single mother. And even though my girlfriend experiences hardships in the world on account of being trans, we are, after all, both white. All this is to say that intersectionality is not just about acknowledging the crossroads of oppression; it is about acknowledging intersecting privileges.

So, yep, I wear a Scarlet Letter. And yep, my lover is a woman. And yep, being a single parent is hard. But please, white cisters, stop ignoring how struggles like mine are compounded for non-white people. White cisters—particularly those of you in the sex workers’ rights movement—I’m coming for you.

I’m coming for you because not a day goes by that I don’t hear about your egregious or, in some cases, violent gaffes consistent with the preservation of white womanhood. You might not even be aware of your toxic behavior. Or you might dismiss fellow white sex workers’ racism by claiming, “Well, no one takes those bitches seriously, anyway.” This is erasure, and it inadvertently propagates systems of white supremacy, which are reliant upon the notion that racism is not a “serious” threat. 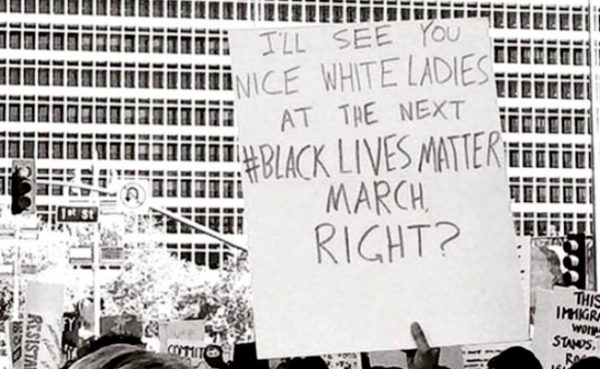 It is perhaps unsurprising that white cis sex workers exhibit racism, sexism, transmisogyny, and whorephobia, even while rejecting the ethos of TERF and SWERF feminism. In fact, it is precisely in times like these, when we face the potential for extinction itself, that people are likely to salvage what little privilege they have left, and always at the expense of those without it. In her 1984 essay “Thinking Sex: Notes for a Radical Theory of the Politics of Sexuality”, Gayle Rubin argues that in times of great social unrest, particularly in times of war, people become dangerously obsessed with sex. This obsession mirrors classic projection—scapegoating others assuages one’s own fear of demise (or at least serves as a momentary distraction). When you live in a society that criminalizes sexual behavior, behavior that is believed to be incongruent with white supremacy and patriarchy, there is no better scapegoat than a sexual “deviant.” And when you’re busy raiding a pizza place on account of unsubstantiated evidence of sex trafficking, you don’t have to think too deeply about fascism.

White cis sex workers, confronted with the rise of fascism and the imminent destruction of our planet’s natural resources, are holding on to the only privilege that is, ostensibly, shielding us from social and literal extinction—our whiteness. This is why Black feminists and Afro-Pessimist/Optimist theorists have long identified the “insider/outsider” position of women of color, particularly trans women of color, as a distinctly powerful standpoint. When the privilege of distraction is not a privilege you are afforded, you see the sinister workings of social institutions very clearly. On the other hand, white cis women in the sex worker rights movement are still attempting to preserve white respectability in the face of a crumbling culture, at the expense of really seeing.

It’s like our plane is crashing and white cis women are whiling away time trying to keep their Louis Vuittons out of the fire. White, cis sex workers and allies, put your fucking purses down and pick up a fire extinguisher.

The preservation of white womanhood—and all the privilege of distraction it affords—will propel racism ad infinitum. Every time you, white cisters, decry drug-using sex workers or call a sex worker of color “divisive,” you are indulging the institution of white womanhood; you are tacitly saying, “See?! I’m not like those whores! I’m a respectable white woman!” More importantly, scapegoating non-white racial/ethnic groups in the sex workers’ rights movement is an attempt to avoid culpability for criminalized labor; it is a pathetic appeal to institutions of white supremacy for whiteness to trump “deviant” sexual behavior. These tactics are the white, cis sex worker’s version of redemption narratives and they are just as racist, classist, ableist, whorephobic, and transmisogynistic as those propagated by TERFs and SWERFs.

Many of us in the sex worker rights movement concede that being a good ally entails sitting the fuck down and listening. Like LeMoon argues, true allies give up their political and social platforms in order to challenge intersecting relations of power and privilege. White, cis sex workers—myself included—must likewise interrogate our own privileges, even when our labor exists on the margins of society. As W.E.B. DuBois wrote in his 1903 book, The Souls of Black Folk, “to be a poor man [sic] is hard. But to be a poor race in a land of dollars is the very bottom of hardship.”

I want to thank Che Gossett, the Incredible Edible Akynos and anna saini for their tireless work in addressing systems of racism, particularly within the sex workers’ rights movement.