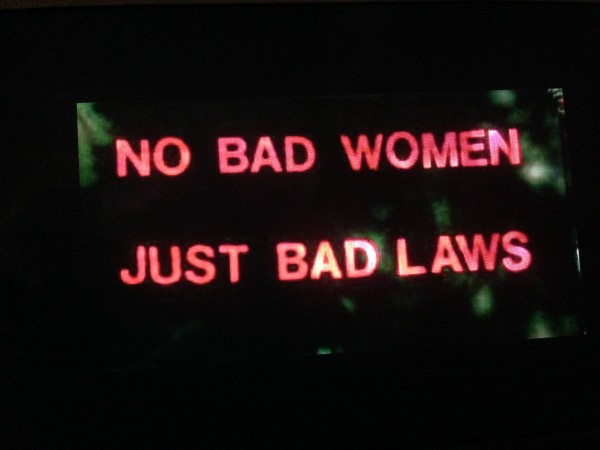 Terra Burns runs the informative Sex Trafficking In Alaska site, which provides information on how Alaska’s sex trafficking laws harm the people they are supposed to protect and those who are in the sex industry by choice. This is a speech she will be giving today, December 17th, the International Day to End Violence Against Sex Workers.

In Alaska, independent prostitutes and actual trafficking victims have been prosecuted under state and federal trafficking laws. Keyana Marshall, one of the featured cases on Terra’s site, is a victim of violent sex trafficking who was convicted under federal law of conspiring (with her trafficker) to traffick. You can listen to Keyana tell her story here.

A few years ago I was visiting a friend in Canada, where prostitution is basically legal. She was working with a collective of escorts—they worked together and shared the expenses of a workplace, advertising, and security. In the United States, they call this a sex trafficking ring and the women involved would be called felons, but in Canada they just call it common sense, more fun, and more safe.

So, we’re sitting around and the phone rings. It’s a woman who had been part of the collective but she’d gotten back together with a boyfriend and no one had heard from her in a while. She said she only had a minute to talk, that her boyfriend had just stepped out and he would hurt her if he knew she called. He had been keeping her in a hotel room, feeding her drugs, pimping her out and taking all the money.

This is the sort of sex trafficking that people need protection from.

I was shocked when my friend immediately called the police. In Alaska, sex workers don’t call the police, because when they do they go to jail. In Canada, we met the police at the hotel where my friend’s coworker was and they arrested her boyfriend. They took a statement from her and they told her she should take care to work with good people.

In Alaska, law enforcement gives violent criminals free rein to target people who work in the sex industry—not just prostitutes. Robert Hansen was allowed to kill dancers, waitresses, and prostitutes in Alaska for twelve years because most of the women who escaped and tried to make reports to the police were turned away or threatened with arrest.

More recently, Anchorage has had a few violent pimps who assaulted, drugged, raped, and tortured women. These men were and are able to continue doing this for years. At least one of these men was under surveillance by law enforcement for years, but his victims were more afraid of the police than he was. When these men are arrested, their victims are often arrested along with them.

Professionals in Alaska have a certain way of talking about prostitutes. They say that all prostitution is victimization, that prostitutes are suffering from false consciousness, or they must all be on drugs. They say that if we don’t value sexuality so much that we only ever give it away for free there must be something wrong with us, and they’ve taken it upon themselves to save us from ourselves. By arresting us.

This paternalistic idea that a group of people are like children who need the government to decide what is in their best interest is not new. The same idea was used to justify hundreds of years of slavery when slaves were viewed as incapable of taking care of themselves or making their own decisions. The same idea was used to justify cultural genocide and send thousands of Indigenous people to boarding schools where they were forcefully stripped of their language and culture because it was believed that they were savages who needed the government to force them into domestication.

I wanted to learn how the new law was actually being applied, so I requested information on all cases involving sex trafficking or prostitution under Alaska state law in 2012 and 2013. The Department of Law responded with only six case numbers, two of which seem completely unrelated. Here is what I learned:

Some might say that this is not enough data to judge the law by. After all, it could someday be used to prosecute someone who preys on prostitutes, rather than prostitutes themselves. I think that would be much more likely if the law protected, instead of re-victimizing, prostitutes who were victims.

What is clear is than in the year and a half since they were passed, the new sex trafficking laws have only been used against sex workers and not to protect them. This criminalization makes sex workers more, not less, vulnerable to sex trafficking. This phenomena of sex trafficking laws having the opposite of their intended effect has been documented throughout the world. The United Nations spoke out against this in 2010 and again in 2013, saying that the decriminalization of all aspects of consensual sex work is necessary to protect human rights.

The people who lobby for these types of laws say that they want to abolish prostitution, but when people attempt to get real jobs with felony sex trafficking convictions they most often fail. At a sex trafficking conference this summer, an FBI agent spoke of a sex trafficking victim who was fired from a fast food job because of the prostitution charge that was still on her record years after being a victim of sex trafficking. I don’t know this woman, but I imagine that she needs money to survive, and she might find herself with few options other than prostitution. It is almost as if the state, by their own definition, is trafficking women like her by inducing them into prostitution when they take away most or all of their other options.

This law needs to be repealed, and if the state truly wants to protect people from sex trafficking, they need to work with us, instead of against us, to create laws that do that.