To know Sadie West is truly to experience an enigma. The girl has an exceptionally deep voice and her rumbling laugh will drop to a whisper, unexpectedly. She is an outrageously attractive woman with full natural lips, huge green eyes, deep olive skin, and dark hair. Her breasts are real as is her round, full bubble butt.

Beneath this outwardly goddess-like woman is the little girl that I knew and grew up with. This rowdy tomboy stole my underwear and hung it on the clothesline for her brothers to see at the family barbecue. As kids we would play hide-and-seek late at night on the deserted high school campus, where we would often hide in the drainage sewer. We would spend afternoons at the public pool, Sadie speaking loudly in an English accent, yelling “bloody fuck!” off the high dive. When the new neighbors moved in next door to her parents’ house, she had them thinking she was an adopted British kid for at least a week.

She began doing porn while I entered college, and we drifted apart. When I started slinging sex toys and DVDs at the local adult shop, I recognized her face on the cover of a newly released flick. I called her immediately. As it turned out, she was happy to talk to me about her new choice of employment, and eager to list all of the pros of her decision. Nearly four years later, happily immersed in the stripper scene of Portland, Oregon, I realized I hadn’t spoken to my friend since the holidays. I felt a slight pang of guilt when I dialed her number but was relieved that Sadie was happy to hear from me. Surprisingly, she told me that she had recently retired from the adult industry to start two separate clothing lines (keep an eye out for Organized Crime). I told her that I was stripping. “That’s awesome,” she answered, “You can use your sexuality and your power, and you can take control of everything. You can use it for good. I’m so glad you decided to strip.” I tentatively asked her about speaking candidly about her experience in the adult film industry.

“Dani-Elle. [She used my full name] Did you really…just call me…to do an interview?”

“Haha! Fucker!” she cackled into the phone. “I’m kidding. I don’t care. What do you want to know?” I lovingly called her a bitch and with that, we began the interview.

So, you’re 23. How long have you been in the adult industry?
Altogether, including escorting? Let’s see… I started escorting when I was 17. So, from 17 to 23. Holy shit, nearly 7 years.

How did you feel about it, initially?
For the most part, I felt pretty good. I think you have to be a certain kind of woman in order to do the work but still enjoy it and not lose sight of yourself. I’m an indigo child and a strong woman. I didn’t lose myself or my own image, like a lot of girls do.

What are you favorite types of sex acts to perform?
Blowjobs are definitely my favorite. It really depends on my mood, how I woke up feeling that day. Some of my scenes are sweet, some of them are passionate. Sometimes I seem shy. Other scenes I look completely fucking nuts. I got bored. I got sick of doing the same ol’ thing. Some of my later scenes are psychotic and I’m just going crazy. If I hated men that day, you knew it and that’s what made me a real performer; I wanted to communicate to the camera and audience.

What is the major difference for you when you are having sex off camera, and on?
I’m not very promiscuous anymore, I’ve almost been desensitized… which could be a good or bad thing. The best part about sex, is when you make a full connection with that person. That mind-body-soul shit. I mean, I could tell you that I definitely learned a LOT of stuff while doing porn, and I walked away with some great tricks [laughs] but the biggest thing that I took away from it, is not to be so promiscuous. Because it’s easy to fuck somebody but it’s a lot harder to connect with your bodies, and that’s what I’d rather do now.

What were some of your least favorite things?
The bullshit between the performing girls. The cattiness. Just… stupid comments. And my coworkers trying to control what I looked like. And those same coworkers also trying to compare the things you can do onscreen with what they can do. In the worst cases and with the worst individuals trying to “manage” you, it’s almost like sex trafficking.

Do you think that would have affected most girls more heavily than yourself?
Fuck yeah, a weaker person would be completely lost and changed. Yeah, I just got sick of people telling me that I was… ugh… If I want to go out in a ripped up t-shirt, I shouldn’t have people telling me, “Sadie, you’re suuuch a character.”

Some of the companies you were working for: Brazzers, New Sensations… they definitely have a certain aesthetic that they display in their performers. Did you ever feel like your appearance was contrived?
I’ve had this concept of beauty and tattoos for a long time, and it evolved. But for the companies I was working for, they got to be so demanding that I was sick of it. It started to be where I was walking off sets, telling them to suck my balls. I was working for Stormy Daniels and Wicked, yet I was over it. When I went out, I went out on top. I got a sleeve, I forgot to tell you. I got a full sleeve, dyed my hair pink and pierced my lip, thinking that they would stop hiring me and they still wouldn’t, those bastards.

But you loved it when you started, right? I remember you gushing about it on the phone a couple years ago.
Oh yeah, I did. But I just got sick of it.

You got burnt out?
Yeah, I got sick of being compared to other girls. Trying to feel like I have to measure up. So many of those girls in the industry… they walk around with their noses in the air… it’s not a good way to live, dude.

I remember you telling me about Bree Olson having her shoes put on for her by her assistant. And you were like, “I can put my shoes on myself.”
Yeah, shit like that. I remember meeting Belladonna and her husband, and she was saying, “Part of the reason you have money, is because you save money.” I don’t need to have a personal assistant to put my freakin’ shoes on. 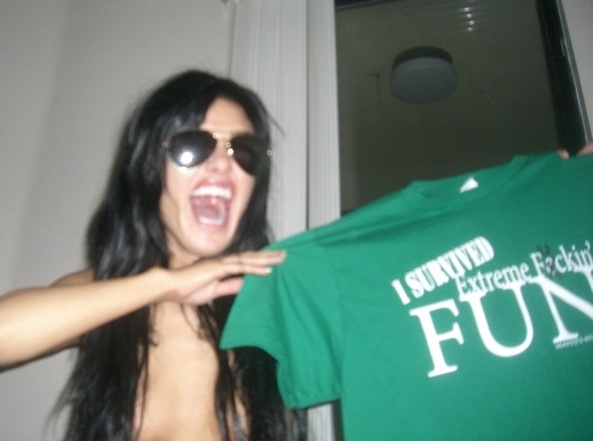 Despite all of that, are you happy with yourself?
I am happy with myself. I did well and I made money, and I learned a lot. But I’m done now. I’m out of the scene, and I’m not going back. It’s time for bigger things. You’ll see.

I could almost feel her winking over the phone. I called her the next week to follow up. I caught her voicemail and I was pleased with her outgoing message. The low voice of Sadie West, telling her callers: “I’ve made some changes in my life. If I don’t call you back, you’re that change. Have a good day.”