TITS AND SASS SERVICE JOURNALISM BY AND FOR SEX WORKERS
Home Movies Call Me: The Rise and Fall of Heidi Fleiss (2004) and Heidi... 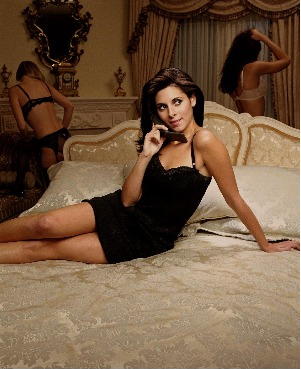 Tearing through its exposition at a breakneck pace, Call Me: The Rise and Fall of Heidi Fleiss wastes no time getting to its main subject. Within the first five minutes, we learn that Heidi had a strict mother and an easygoing father who encouraged his children to act out. Soon after, we see teenage Heidi organizing the neighborhood girls’ babysitting schedules, foreshadowing of her management skills. In the next scene she learns her parents are divorcing. Three minutes later we see Heidi’s boobs as her creepy older boyfriend, Ivan Nagy, recruits and then sells Heidi to her future madam, Alex, for $450. At first, Heidi Fleiss is outraged with her pimp boyfriend, then for no apparent reason decides to go along with him.

Young Heidi’s first client is a curly-haired rock star. When he leans in to kiss her neck, she shoves her hand down his pants and demands $1,500. He scoffs at her so she turns to leave, asking, “Is it lonely at the top?” He then asks her to stay and the deal is sealed. Although I have never worked as a call girl—and please ladies, correct me if I’m wrong—but I’m going to make the assumption that insulting your client is a bad tactic. The scene felt unrealistic and I found myself doubting that the real-life Fleiss could have been so successful despite such poor social skills.

As they stroll through a shopping mall, Heidi casually explains to her younger brother how she suddenly is rolling in money: “Can you keep a secret? Guys pay me to have sex with them.” Then the scene is cut away. There is no indication of any response from him, leaving the audience to wonder how her family really felt.

Heidi continues to rake it in, moving up in the ranks so quickly that after her 1990 arrest, Madam Alex pleads from a jail telephone with Heidi to take over her business for her temporarily. In turn, Heidi and Ivan undermine the business, convince the working girls to answer to Heidi instead, and take all of the clients. What follows next is a montage whirlwind of cocaine snorting, sparkly dresses and pool parties, soundtracked by phones ringing off the hook. Throughout all of this, it is alleged that the LAPD allowed Fleiss to stay in business in exchange for services from the girls. When Fleiss stops, the police raid her mansion and she is arrested. In the interrogation room, a defiant Fleiss utters one of the only redeeming line in the entire movie: “How many Johns are you busting while you’re busting me?”

Since the film was made in 2004, before the U.S economy became the clusterfuck of today, there is not much mention of economic or political climate to set the tone. It is never indicated that Fleiss began sex work because of financial necessity nor is it suggested that the sex with clients is unpleasant. Although in real life sex work, like any other job, has its ups and downs, it’s a good thing the USA Network didn’t try to show the dark side of sex work. They likely would have gotten it wrong. The script is based on conjecture and speculation even though the real Heidi Fleiss has been candid with the media since her arrest. The nature of her work as a high-priced prostitute and subsequent madam can actually be gleaned from interviews.

Fleiss is portrayed by Jamie Lynn Sigler (Meadow Soprano, working at the time under Discala, her married name), who is the best-known, least-talented actress in the entire cast. Her performance is heavily based on twisting her mouth, rolling her eyes and licking her lips in nearly every scene. And while the movie suffers from poor acting, crappy writing and choppy editing, at least it didn’t vilify sex work. Although shallow at its core, the movie does a good job of indicating that Fleiss is most likely a self-actualized individual, and that sex work itself isn’t inherently bad. Fleiss claims “I do remember being a very moral madam.”

The closing line of the film is spoken by Fleiss upon her release from prison: “If you realize most women are evil rotten bitches, most men are predictable pigs, and someone is going to be on a morality crusade, it should be easy to sit back, relax, and smile.” Not exactly uplifting or true, but it leaves the audience feeling that the real-life Heidi Fleiss landed on her feet and is doing just fine. 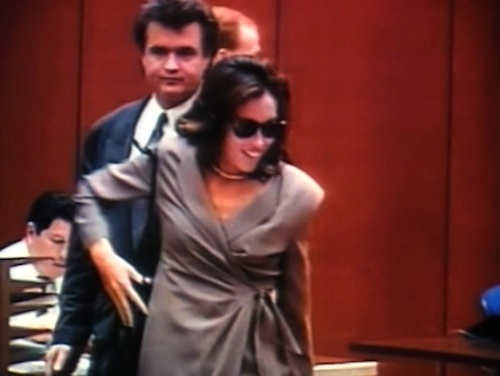 Nick Broomfield’s 1995 documentary, Heidi Fleiss, Hollywood Madam opens with 1993 news footage of 20-something Heidi entering a courthouse. She is clearly basking in the attention, and only a few minutes later she is shrugging, smiling, and defiantly flipping off the media cameras as she walks in handcuffs.

Broomfield narrates the film, his British accent succinctly detailing her journey from young call girl to madam. Even with its shaky camera and obviously low budget, Broomfield’s film is instantly more compelling than the USA movie. He isn’t afraid to get his hands dirty. Broomfield pursues all leads, even when they seem dangerous. He investigates dirty detectives, Fleiss’ creepy ex Ivan Nagy, a few suspicious pornographers and even a Hungarian hit man named “Cookie.” Comically, Broomfield is at one point nearly spit on by a street prostitute.

Broomfield speaks with Fleiss’s mother, a peaceful, attractive, wild-haired woman who seems unperturbed by her daughter’s former occupation. In a television interview, Mama Fleiss laughs gently, and says “A lot of people are so down on prostitution … I’d like to make $1,500 for a hard night’s work, too.”

The now-deceased Madam Alex, Heidi’s former boss, is central to the documentary, and she is fascinating. The overweight, bedridden Philippines-born madam is all business, with a touch of protective mothering. She speaks quietly and directly, never allowing Broomfield to know more than she will allow. The real-life cast of characters is far more intriguing than anything that USA managed to muster, and it left me wondering what really happened in that whirlwind of sex-work, cocaine, cash, and cops.

Despite his persistence, Broomfield displayed integrity. He was was able to shed light on the motivations and personal life of Heidi Fleiss rather than merely editing old footage of her public persona. Rather than glamorizing the sex industry of the 90’s, he had a genuine curiosity about the dynamics of Fleiss’s personality, something the USA film never comes close to exploring.

My advice? Skip USA’s Call Me and check out Heidi Fleiss; Hollywood Madam instead. Besides, it’s actually cheaper on Netflix.