TITS AND SASS SERVICE JOURNALISM BY AND FOR SEX WORKERS
Home Books An Intimate Life: Sex, Love, and My Journey As A Surrogate Partner... 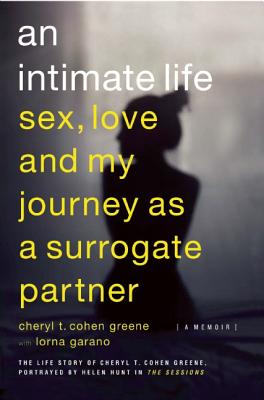 An Intimate Life might not exist if not for The Sessions, last year’s Oscar-nominated film fictionalizing the experience of sex surrogate Cheryl Cohen Greene and her client Mark O’Brien. From the blurbs by actors Helen Hunt and John Hawkes to the book’s pictures of Cohen Greene posing next to the stars, it’s obvious the publishers were guessing most readers would come to the memoir through the movie. I hope it finds a wider audience than that, though, because it could have a big impact on the lives of the sexually misinformed, anxious, and ashamed. Through a combination of vignettes about several of her clients and the recounting of her own sexual awakenings, Cohen Greene offers a blue print on expanding one’s sexual life. As one reviewer on Amazon wrote, “Thank you from my heart and penis.” Sounds like something one of my guys would say.

Awesomely, Cohen Greene opens the book with her number of sexual partners (900) but perhaps less awesomely, she follows that immediately with an explanation of why she’s not a prostitute. I admit that I’m probably a little oversensitive to this, but what is she trying to say exactly? Does she think there’s something wrong with being a prostitute? You don’t come around these parts blowing that horn, Madam. While I imagine Cohen Greene is not someone who would sneer at or shame prostitutes, it’s a little suspicious that she so regularly wants to distance herself from us. For her, the difference in our work is “significant”:

Part of me gets it. But another part of me thinks she might not know many escorts.

There are lots of of fine differences in all varieties of professional fields that are hard for laypeople to understand, but may matter a lot to the individual who uses them to define and distinguish his or her work. This issues is compounded for sex workers because we exist in such a diverse, fluid, and largely illegitimate field, pinning labels on any person laboring within it can be tricky. We determine our own titles because we’re not working under any type of certification or corporate system, because we need euphemisms to downplay the oft-illegal nature of what we do, and because we want to give a sense of the particular tone of experience we offer. Hence the self-appointed tantric specialist, sensual energy worker, intimacy coach, luxury companion, etc.

When talking about prostitution in particular, it’s a struggle to recognize all the varieties (high-volume, short appointment; moderate volume, incall based; agency-managed outcall-only, etc.) without implicitly endorsing and perpetuating the stigma that often accompanies those stratifications. When Cohen Greene says, “here’s how I’m not a prostitute,” and then lists some aspects of her work that plenty of prostitutes can relate to — you think I have PIV sex with every single guy I’m with? — I feel compelled to call it out. She can and should call herself whatever she wants, but she doesn’t need to define her profession against assumptions and misconceptions about another.

For instance, she refers to all of her clients as “clients,” not “patients.” I do that too! She regularly sees men suffering from insecurity, erectile dysfunction, ignorance, and lack of experience. Me too! She writes that “it’s not unusual for clients to want to give me pleasure,” and ugh, I can relate. She cleans up semen at one point with tissues and here we differ, because that’s just bad form. (You can’t spare a warm washcloth?) Escorts often help clients with their E.D., their communication problems, and lack of experience. It’s strange that while Cohen Greene laments the diminishing pool of surrogate partners, which was already a small one, it doesn’t occur to her that the demand for such services falls to other sex workers. What is the “the girlfriend experience” promise but a retooling of the offer of a “surrogate partner,” the phrase Cohen Greene prefers over “sex surrogate,” since it takes the emphasis off of the physical.

I imagine part of her disavowal of anything remotely prostitution-like in her work has to do, as it so often does, with the criminalization and stigma around prostitution. (I’ve written about this before, so I’ll try not to repeat myself.) Notably absent from the entire memoir is any discussion of the legality or illegality of Cohen Greene’s work, but let’s be blunt: under the patina of expert status and medicinal utility, she has sex for money, which is illegal in the United States. Since she lives and works in San Francisco, a place where cops pull her car over solely to mention they’ve seen on TV and admire her work, this might not be much of a concern. Any vice squad busting a white, 68 year old surrogate partner is going to have a PR nightmare on their hands, particularly now that she’s achieved a modicum of fame. But the lack of any political message in the book if a substantial omission. White folk slap a scientific name on their prostitution (yeah, I went there) and get to do it out in the open while trans women of color simply dare to carry condoms in public, and they get arrested? Nu-uh. Not okay. But maybe that’s another way she’s not like most prostitutes: she can afford to ignore the laws without fear of repercussions.

With politics firmly out of the picture, Cohen Greene takes issue with the more nebulous sex-negative and sex-confused attitude that dominates our culture. She advocates for sexual education and non-judgment, but it’s unclear where this wellspring of positivity is supposed to come from: our families, our friends, our partners? One of the 50 surrogates still working in the US? This is only a memoir, not a how-to manual and not a manifesto, but an opportunity was lost.

With all that said, I love Cheryl the narrator. She is incredibly warm and sweet, and I adore that she’s almost 70 with no intention to retire. She comes across as a good person whom her clients are lucky to have. (And in a twist I know some sex workers can relate to, she even embarks on a long-term, unpaid, romantic relationship with one of them.) She’s also open-minded and always learning new things, so I’ll hold out hope that she may yet realize we are not so different from her. “Surrogacy work takes many forms,” she writes. “It always includes a mix of education, exploration, and sexual play, but the balance between them shifts according to the client and his or her needs.” Hmm. Almost sounds like an exact description of what many sex workers do.