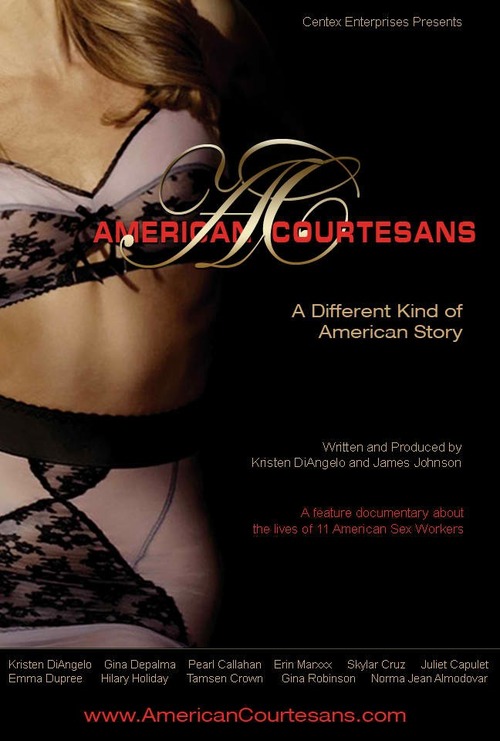 The tagline for American Courtesans describes it as a “documentary that takes you into the lives of American Sex Workers” and telling “a different kind of American story…” The film is (thankfully) less ambitious in scope, focusing on high-end escorts instead of the entirety of the sex trades. What American Courtesans does, and does powerfully, is offer an intimate perspective into the lives of its subjects, giving them a space to talk about their lives and work. The women share stories of both triumph and trauma, showing that there is no single or simple story about work in the sex industries. With exceptional production quality and sincere, candid interviews, American Courtesans moves us further towards changing the popular conceptions of sex work.

The film weaves the stories of eleven current and former sex workers together through interviews and casual conversations with Kristen DiAngelo, the driving force behind the project. Though all of the women ended their careers as independent escorts charging high rates, their backgrounds up to that point are extremely varied. The majority of the women are still working, and quite a few illustrate the fluidity of the sex industries as they describe their experiences in pro-BDSM work, porn, stripping, and other fields of sex work than escorting. The women in the film give the audience a diverse set of experiences in the sex industries. From Juliet Capulet in San Francisco, who talks about escorting as a way to explore her identity as a sexual being, to Gina DePalma in New York City, who was working on the streets as a thirteen-year-old runaway, the audience is reminded that sex workers belong to and come from all communities.

Each of the eleven women had profoundly different experiences in their work, and this medley proved that there is no single narrative of the sex industries. Though each one seemed happy and relatively stable at the time of the interviews, many had experienced violence, arrest, and economic desperation. Kristen DiAngelo specifically shared a harrowing story of assault that nearly had me in tears. Shockingly, in spite of having just heard her story, in the Q+A after the screening I attended, one member of the audience asked Kristen: “Did you decide to only interview sex workers with a positive experience in the industry or did you purposely cut negative stories from the film?” It was a chilling reminder that any portrayal of sex work that is not solely focused on victimization and degradation is received as glamorizing. American Courtesans was clear in its intent to focus on a specific subset of sex workers and comprehensively explore their lives. There was no sugarcoating or romanticization of the courtesans’ work.

Admirably, the film also includes testimony from clients and family members of sex workers. Four children, three husbands, one parent, and one sibling spoke on camera about having sex workers in their family. Though many had initial misgivings, universally the families expressed pride in the ways that their sex working relatives had overcome challenges in their lives, and sorrow for the stigma and oppression they had to face. It was heartening to see the love and support they gave the sex workers in their lives. Because I speak about sex work with clients fairly regularly, I was less impressed with what they had to say. But I’m a biased listener, and I am appreciative of their courage to be a part of the project at all. Stigma against sex work has harsh consequences for everyone involved. Just as the sex trades are bigger and more complicated than a simple transaction between a sex worker and client, the lives of sex workers are bigger and more complicated than the fact that we have engaged in transactional sexual encounters. Incorporating our families and clients in media about us, drives that home.

There were, however, some significant flaws that bothered me. There were a number of production decisions that I was troubled by (echoed here), especially the sexy close ups of the participants bodies throughout the film. One of the most powerful aspects of American Courtesans was seeing sex workers speak freely and openly, but being out at that level is a privilege the most marginalized members of our community rarely have. I would have liked to see more analysis of the ways race, class, and gender identity shape different experiences in sex work. I know the goal was to reach a broad audience through mainstream distribution, and that kind of analysis isn’t always compatible with those goals, but it’s not a compromise I’m comfortable with. There was one conversational comment from a black escort along the lines of “it’s harder for black women in the sex industry,” but that is simply not enough. The film featured a number of women of color, yet that statement was the extent of racial analysis. American Courtesans had an opportunity to really engage with racism and how it effects sex workers specifically. Not seizing that opportunity was cowardly and disappointing. Deepening the exploration of oppression in both a social and legal sense would have added to the humanizing work of the film and presented a much stronger message.

American Courtesans was a good step in the right direction, but we need to keep pushing further. We need to hear more sex workers voices. We need more and better media projects. We need to reach more people. I want to echo Stacey Swimme’s call for strengthening sex worker communities and hearing more families, friends, and allies speak out in support of sex workers. When sex workers refuse to be silenced and demand that our lives (and work!) be recognized as important and valued by our communities, it can be a profound act of political resistance. I hope that this film can inspire more work that will push the messaging further, and that sex workers continue to gain access to resources to spread those messages to change minds, culture, and policies.

I attended the screening of American Courtesans accompanied by Vanessa and Stacey Swimme, and I think it’s important to credit them both for helping me formulate and articulate my thoughts. Specifically, I wrote this review shortly after we recorded this conversation about the film.