TITS AND SASS SERVICE JOURNALISM BY AND FOR SEX WORKERS
Home The Week in Links The Week In Links: July 27 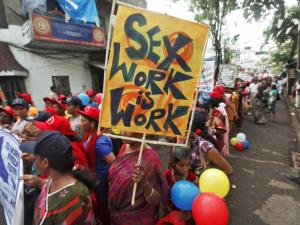 Indian sex workers who could not get visas to attend the International HIV/AIDS Conference in Washington, D.C., held a parallel meeting in Kolkata this week. Over 800 sex workers and activists from over 41 countries participated.

Canadian strip clubs and massage parlors announced plans to recruit at high school job fairs now that the government has discontinued visas for adult industry workers. “We will be taking a strippers’ dance pole with us to the schools,” said the head of the Adult Entertainment Association of Canada. Well played.

A Savannah prostitue solicited a reporter during a television interview with a police officer on the topic of prostitution. The cop and “Rhonda,” the prostitute, then engaged in a 30 minute discussion on the efficacy of social services and how realistic getting another job would be.

London-based stripper Sassy will be covering the Olympics on her blog from a sex worker’s point of view.

New Zealanders have called for the creation of a “buffer zone” to separate large-scale brothels from residential areas.

A prostitute who had seen James Holmes, suspect in last week’s movie theater shooting in Colorado, said that he had always been a “really nice” client.

Police in the UK have shut down about 80 brothels over the past two years in preparation for the 2012 Summer Olympics.

Women feel sexiest at age 28, according to a new study by British feminine hygiene company Lil-Lets.

In Florida, a 28-year-old woman is being charged with child neglect for leaving her 3- and 5-year-old kids sitting alone in a pickup truck while she paid a visit to Mons Venus strip club in Tampa.