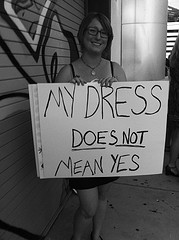 In Nigeria, an ex-prostitute attempts to burn down church due to Catholic ex-lover who initially liberated her from prostitution and then left her.

Strip club cocktail waitress fired for refusing to give TLC back massages to customers sues on grounds of sexual harassment.

Some lame asses give lame reasons why strippers are un-dateable.

Texas stripclub sues police for attempting to strong arm club out of business after police raid club for drugs, find no drugs, and allegedly take off with club’s cash.

Rick Rizzolo, former owner of Las Vegas’s Crazy Horse Too, is headed back to prison (AGAIN!) after violating terms of his supervised release. Why’d he get arrested in the first place? Not paying taxes. Pay your damn taxes!

In Melbourne, Australia, a convicted rapist on parole has been jailed again for beating a sexworker.

Adult film star and plus-size model April Flores addresses American Apparel’s lack of clothing for curvacious beauties such as herself and their dissing of plus-size model contest winner Nancy Upton.

Law journal comes up with clever headline “Career Alternatives for Attorneys: Stripper? From the Bar to the Pole” then goes on to call stripping “brainless” work and claim most strippers haven’t read anything “since their last visit to the clinic.” We’d like to hear from some of our stripper lawyer readers about this.

Some nerdy bloggers from Uber discovered that there are more prostitution crimes on Wednesday than any other day in San Francisco and Oakland.

Dr. Phil talks with Brandon Wade, the creator of SeekingArrangement.com, sugar babes, a real dad, and a sugar daddy who walks out.

Gigolos in Bangalore have all but disappeared despite high demand.

Suspect in bank robbery recognized from TV by strip club employees and arrested.

Where do you think the smartest strippers in Canada are? This completely unsupported claim says Toronto!

The Gloss publishes a piece questioning the allure of male strippers.

In DC, stripper sues her former club for taking too much of her tips and lap dance earnings and underpayment.

Leave a Reply to Of many names... Cancel reply