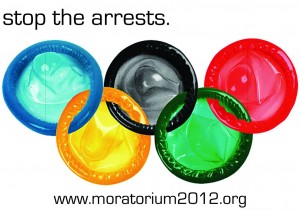 The Stop the Arrests movement is calling for a moratorium on prostitution arrests in London throughout the 2012 Olympics.

Laura Agustín links to studies that have disproven the myth that trafficking spikes around major sporting events.

NYPD cop by day, stripper by night Steve Stanulis wrote and is starring in an Off-Broadway play about male strippers.

Meet the Fokkens, a documentary about Amsterdam’s 69-year-old prostitute twin sisters Louise and Martine, will debut at the Film Forum festival in New York this summer.

Do Wall Street workers really spend a billion dollars a year in strip clubs and nightclubs?

Instructors of Las Vegas’ Stripper 101 class have filed suit for invasion of privacy, claiming they weren’t told about surveillance cameras installed in their changing areas and classroom.

A woman accused of performing illegal buttocks enhancements using silicone and Krazy Glue (it is believed at least one recipient died) will be tried in Philadelphia for aggravated assault and practicing medicine without a license.

Famed Houston strip club Treasures is the target of a lawsuit by the city, which is suing to close the club as a public nuisance.

Dancers at the Crazy Horse in Paris are back on duty after striking last week.