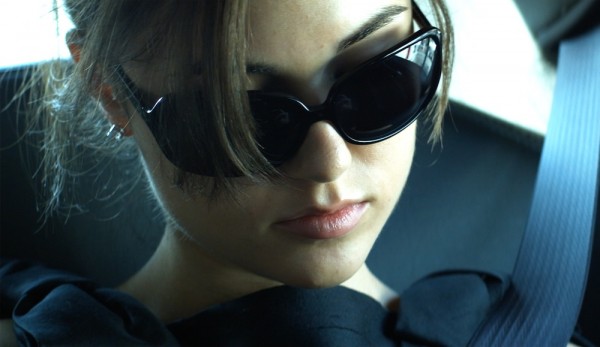 The “girlfriend experience” concept is really interesting. In escorting, the “GFE” is treating a client as you might a lover—you talk to them about their day, share a bit about yours, kiss, cuddle, and have an intimacy that goes beyond penetrative sex. Men want space to be vulnerable and talk about what they’re going through to a woman who will pet their head and tell them it’ll be OK, enough to pay for it. Can a sex worker maintain that intimacy while still maintaining professional boundaries? And what do you do when you no longer want to maintain those boundaries, when you want to take it personal? How do you deal with the fallout?

Two years ago, in London, I saw a movie that asks a lot of questions about this kind of situation, called, appropriately, The Girlfriend Experience. I was invited along to the film and accompanying Q & A with actress Sasha Grey by my ex-boyfriend, N…who also just happened to be my ex-client. Focused on the experiences of a New York escort, Chelsea, trying to maintain a relationship with her personal trainer boyfriend, Chris, while entertaining high class clients, it touched on some of those personal and professional issues. There’s a running theme about money and comfort as many of her clients have been affected by the recession and, on some level, use her for reassurance; these were men looking for reassurance of their financial power, of their sexual power, and, often, of their value as a person. Interestingly, both Chelsea and Chris commodify their bodies in the service of selling a sense of well-being to their clients. Isolation is also central, the sense of trying to connect with someone, anyone, even for a moment—and that crushing feeling when you make that effort and they don’t reach out for you in return.

Sasha Grey’s acting was pretty flat, but I think she aimed for that sense of being shielded, all the time, with everyone. The attempts of the clients to break through that, too, was familiar. Though not representative of myself. I am pretty genuine all the time, clients or not. I don’t tend to live in a persona, though I know and understand plenty of sex workers who do. I can’t say I blame them. Being genuine is a form of intimacy that’s not always what the client wants in the end.

What do men want for a girlfriend experience? They want what they want you to be. If they wanted you to be yourself, they wouldn’t be paying you.

Personally, I haven’t found that to be true. I suspect N liked that I was clumsy and silly and real—not just a caricature of female dominance, but someone who really loves this stuff and trips on her own heels and is a real person. That said, it’s as hard to be emotionally open as it is to present a persona. You can’t be entirely honest, but if you’re not somewhat open, they won’t open up to you either. While I don’t think I could be like Chelsea, a blank canvas for the client to paint in, ultimately, their own image, it’s fucking hard to be myself, too. Sometimes I just want to do my work. I don’t always want to be the evangelist for nonmonogamy or kink or queerness or even sex workers’ rights.

But at the same time, because of that openness and the questions I get in return, I feel a responsibility to educate that’s hard to turn off. I am proud of the intimacy that is created- by being vulnerable with them, they feel more comfortable being that vulnerable with me. I weave a spell of more than just sex in my experience. I become the mentor, the guide, the girlfriend who cares, the lover who shows them erotic freedom. They leave me feeling like they know more about their relationship to their sexuality than they ever expected…which is a beautiful thing, but draining, too.

While going to see “The Girlfriend Experience” with N (my ex-client-turned-lover-turned-bitter-regret) was awkward, it allowed for a good discussion about how he felt when we went from a professional to a personal relationship. In the film, Chelsea feels she really clicked with a client and agrees to spend the weekend with him, and is crushed when he doesn’t meet her at the hotel he booked in the country. I have total empathy for her in that moment. You don’t know what will happen when the boundaries are blurred, and you can never go back after you make that step. I don’t know what I would’ve done if N had backed out around shopping for toys and fetish clothes, but he didn’t, and he took a risk to see what might happen instead of turning tail. I have a lot of respect for that.

At the same time, I understood Chelsea’s problem. You might meet and click with a guy at work, but will he respect you as a person, as a viable lover and partner? Or will you always be that bit on the side, by nature of your profession? That’s kind of what happened in the end with N and I. He left me for someone who was just like me, but not a sex worker. In his eyes, I was the girl he couldn’t introduce to his family and friends. I was the girl you fuck, not the girl you settle down with, though I paved the way for that girl. It’s lonely, sometimes.

The audience reaction was more illuminating than the film itself. There were moments where I was the only one laughing, and moments they laughed that I found sadly touching. When Chelsea hugs this older, chunky Orthodox Jewish guy, and he shudders, I found it so sad that anyone would be craving human touch that badly. Others in the audience thought it was funny. Add to that the experience of the Q & A period, where I felt Sasha could have used her presence to educate people on the options about legalization vs decriminalization, or women and victimization in porn (both the pros and cons), or being a sex positive feminist. She said that she felt all women were feminists, which is sort of a copout. Feminism assumes consciousness about the choices you make and why you make them. And it annoyed me that people asked things like “Would you encourage your daughters to follow in your footsteps?” and “What do your parents think?”—questions that have been used forever to tell women to shut up and sit down about their sexuality because of family values. Sasha drew parallels to the relative morality of porn performers vs politicians,  but I wish she had said more. She let a lot of questions lie unanswered. Granted, she’s a performer, not an escort, and it’s a very different experience.

I felt frustrated with the audience and the lack of sex workers there to say what they thought about the movie, pleased that Sasha said that the two escorts she spoke to had dated and/or married their clients (suggesting these aren’t bad men), awkward about being there with N, regretful for how things began and finished with him, and determined to stay active and outspoken to challenge people’s beliefs about sex work.

But the big joy of the night ended up being this: N had told his girlfriend that he had paid for two sessions with me, that we met in a professional capacity before we started dating. This is possibly one of the most amazing things someone has done in a long time. He had never been honest with the people around him about me. As much as I tried not to take it personally, and knew it was about the status of the client in society vs. being the worker, it still hurt. For him to have told her was heartwarming and special. It made me feel cared about. Respected.

Granted, our friendship didn’t last forever, N and I. I think I symbolized a shame for him, something he felt uncomfortable about in his past. I have a lot of empathy for my clients, as society tells them that they go to sex workers out of a sense of lack, the whole story of “oh, you have to pay for this, because there’s something wrong with you that you can’t get it for free.” It hurts those clients, and it hurts the workers, whether or not they take the scary step from professional to personal. Eventually I went back in the more comfortable box of the GFE, no longer an ex-girlfriend, but an escort, from another time. It was painful, and years later, it’s still a raw scar.

Like Chelsea in The Girlfriend Experience, I learned that the intimacy shared under that label can be a double-edged sword. It comes at a price, and can wound you both when you forget that it’s a performance, when the curtain closes and the boundaries which seemed so comfortable at first can equally be the barriers preventing connection. As both Chelsea and I learned, the GFE can be a tricky beast.