First of all, congrats on your new baby! How do you expect motherhood to impact your work?

Thank you. I’m brand new to motherhood.  My little girl is only eight weeks old right now.  I’m sure that sharing my life with my daughter will inspire, influence and affect my work in different ways as she gets older.  Right now, as the mother of a newborn, one of my greatest challenges is time.  I’ve always tried to balance more than is humanly possible in a day but now I have a tiny little being who needs and demands my attention 24/7.  I’ve had to really prioritize what areas of my life I need to be giving my energy to right now.  I’ll be working mostly local for at least Emma’s first year, and if I decide to take out of state or country gigs next year then it will be a family affair.  I take Emma along with me whenever I can, such as to university speaking engagements and to the art gallery, and Daddy watches Emma during the more adult-oriented work experiences.

Tell me a bit about Art Gasm, the show you’ve been doing at Femina Potens.

Art Gasm is a quarterly visual and performative multi-media celebration that features multiple bodies of work. Last week’s Art Gasm featured collaborative works by dozens of artists.  The two main exhibits at our Spring Art Gasm were Sadie Lune’s  Biological Clock exhibit and my exhibit, Becoming MILF.  Sadie’s work documents her preparation in becoming a mother and in becoming pregnant.  She created amazing installations and alters referencing the charting and changing of her cervix, her perception of time and how that affects her desire for a child, and she concluded the exhibit’s showing with an invitation-only performance art ritual in which she was inseminated with the seed of her donor and co-parent to her future child. It was a very beautiful and sacred event with laughter, poetry, song and a feeling of community togetherness as Sadie lay on a circular stage of green sod and was inseminated by her friends and lovers. 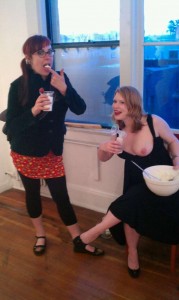 My exhibit Becoming MILF was a visual and performative journey through my pregnancy and into the throws of motherhood while still working in the sex industry. I wanted to express the challenges of balancing the life of the whore and the madonna at the same time. At the opening reception I sat in a corner hand whisking whipped topping for milkshakes while pumping breast milk, and then added the breast milk to the whipped topping. I was using traditional women’s work and the re-appropriating of my breasts for nourishment to create a dessert, encouraging gallery goers to address their thoughts on breastfeeding, breasts of mothers versus breasts of adult film actresses,  and the consumption of breast milk past infancy.  It spurred some fascinating conversations around nurturing versus sexualizing. 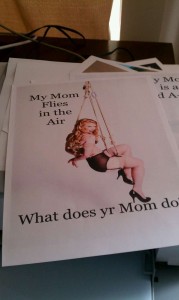 Other works included onesies hung on clothesline with pornographic images of me with text that referenced my motherhood. One such image was of me in a bondage suspension and the shirt read “My Mom Flies in the Air. What does yr Mom Do?”

I also shot a photographic series of me exploring my entrance into motherhood using sex icon Marilyn Monroe.  The series was entitled “MILFing Marilyn.”  It was incredibly challenging creating all new work while at the same time balancing the care of a newborn, but it felt really incredible at the same time to be creating work that was so real and that I really had no distance from.

Did you ever consider retiring from sex work, or stepping back, after you found out you were pregnant?

No.  Not at all.  I’ve been working in the sex industry as a performer, director and educator for the past decade. I run two companies whose missions revolve around positivity around sexuality. This is a career and life mission for me. I see my daughter as an inspiration for me to continue doing my work in the sex industry. I want for her to have positive views of sexuality, self worth, a positive body image and not be ashamed to express herself or communicate with those around her in an honest and openminded way. I want to help create a more sex positive world for my daughter to live in, one that values sexual education and celebrates difference. I don’t feel like becoming a mother means that I can’t be a sexual or sex positive individual. Becoming a mom is a new part of my identity but is only one layer of who I am.

Did you always know you wanted to have children?

I think that has changed through different points in my life.  When I was in a long-term relationship with a person who identified as female, at the time, I felt much more comfortable in my desire to want to have a child with that person. When I started dating my cisgendered male partner, I think a part of me felt like I needed to reject the idea of having children, because it was expected of us by heteronormative society. The first Christmas I brought my partner home everyone was asking, “When are you going to get married? When are you going to have a baby?” I finally said, “I’m a little busy right now. I’m birthing a revolution.” They didn’t think it was very funny. But in the last year I’ve met more and more women in the queer and sex worker community who are having children. I decided to direct an erotic film on women and pregnancy that focused on these women as sexually empowered erotic goddesses. The film had beautiful passionate sex scenes, but it also had in-depth interviews. I learned so much from these women and felt really inspired by their experiences. I think that experience really opened me up to becoming pregnant. Six months after shooting that film I was staring down at a potent “pregnant”  on my pee stick.

A lot of sex workers I know, even ones who are generally unashamed of their work, have trouble when it comes to being honest with their own kids. Since you’re very out as a performer and activist, I imagine you plan to be open with your daughter. Have you thought much about how and when you’ll discuss it with her?

This seems to be the question that is on everyone’s mind.  I definitely plan on discussing my work and career with my child. I plan on talking with her in language that she understands at age-appropriate times in her life. I imagine one our first conversations might be something like this: “Mommy is a pleasure teacher. Just like our Mommy & Me Yoga teacher teaches us how to do downward dog, mommy teaches her students how to feel good, communicate and show their love in a physical way. Sometimes mommy also makes movies where she expresses “cuddle love” to other people in the movie, or mommy directs other people to express  ‘cuddle love’ in a way that they communicate would be fun and exciting for them to explore. Like an adventure.”  I want to make sure to emphasize body positivity, consent, context, communication, pleasure, empowerment and safety. The way that I communicate about sex or my work will change as it becomes age appropriate.

I didn’t consult with my family about my decision. I was already living 3,000 miles away and running my own business by the age of 20. But I’ve been very out about my career  with my parents since the beginning. My mom and I are very close. I take her to Good Vibrations and Pure Pleasure when she is in town and help her in picking out vibrators. We are able to talk about sex very openly. It wasn’t always that way but my Mom has loosened up quite a bit over the last decade and she even has a short cameo role in one of my films, Heartland.  I’m able to talk with my parents about my choice and the importance of creating sex-positive feminist porn for women and couples as well as providing accessible sex education. And they have come to be quite supportive of my work as a whole.

What would you say you’re spending most of your time on these days (other than being a mother, of course)—Femina Potens, making films, or something else?