TITS AND SASS SERVICE JOURNALISM BY AND FOR SEX WORKERS
Home Activism A Protest of a Protest: SOS Oregon Takes on Casa Diablo

I heard from a friend that Portland’s vegan strip club, Casa Diablo, was staging a protest against the meat served at the Acropolis Steakhouse* strip club. Then I saw on the Facebook event page that Casa Diablo were rallying for the OLCC to approve a liquor license for their soon-to-open second location (which happens to be next door to Acropolis). Then I read on OregonLive that SOS Oregon, a Beaverton organization, were protesting the Acropolis. I checked SOS Oregon’s site to learn that they were protesting three things: the new Casa Diablo, the mere existence of the 35-year-old Acropolis, and another strip club two miles away, Blush. Because SOS Oregon were staging a protest, Casa Diablo decided to counter-protest. Confused yet?

As irritating as I find Casa Diablo’s brand of PETA-inspired sexy veganism, it should go without saying that I’m on the side of whoever is not SOS Oregon. If you want an example of the kind of rhetoric that irresponsibly conflates sex trafficking with sex work, look no further. (It seems that we cannot write enough about how damaging this is to both victims of sex trafficking and sex workers, but here is a start.) While most of the material on SOS Oregon’s site is laughably inaccurate, the fact that this glorified neighborhood association is gaining clout is disconcerting. More alarming still is that they seem to be rebranding themselves with less mention of decreased property values and more language about protecting/saving sex workers. Let’s take a minute to have some comic relief at excerpts from PDFs available on their site (there are plenty more where these come from).

On the subject of lingerie modeling (peepshows):

Police say these places are fronts for prostitution. In addition, where there’s a prostitute, a pimp is around the corner, so don’t mess around with the young women working inside. While they are typically not well-protected on the premises, the pimp will eventually catch up with you. You have just messed with his goods. He sets the rules on how those goods are handled and abused.

Even if this were true (which it so isn’t), if you give a prostitute business, a cinematic 1980’s pimp will beat you up because he doesn’t want your money? It must be strange to live in a world where there’s a pimp lurking around every corner.

The following snippet is from the info sheet for the Acropolis/Casa Diablo/Blush protest. The list of offenses committed by the three clubs is long and varied and includes a homeless creek-dweller. (It also includes some xenophobic undertones when citing that Blush’s owner is related to the owner of the Dophin Clubs).

In addition, Acropolis borders Johnson Creek, and a visit there on Friday revealed a person who claims he is the “maintenance man” for Acropolis living in a tarp-covered lean-to on the banks of the creek.

If anything, the existence of SOS Oregon serves as a reminder that Portland’s liberal bubble is not impenetrable. In fact, conservative megachurch Mars Hill just started services this week at their newest location in the heart of Southeast Portland. (One of their promotional videos makes note of Portland’s “thriving sex industry that goes back more than a century,” so this could get interesting.) While the extent to which members of SOS Oregon are religiously motivated isn’t revealed on their site, I would be hard-pressed to believe that they’re not.

Seeing these people in person for the first time was an experience; it’s always interesting when you finally get a face for a name. Or in this case, several faces. Faces with expressions of discomfort. Most of them looked sheepish and pathetic, avoiding eye contact with the real live strippers. They were holding signs about daughters (“Our daughters are not for sale,” “They want our daughters”) and meanwhile here were these vibrant daughters, wives, mothers, people, right in front of them. It really seemed like facing the women whose workplace they were trying to shut down hadn’t occurred to them as being part of the deal. When I think of individuals standing up for what they believe, I don’t usually picture people who look horribly embarrassed; I dare say the whole thing was a little too humanizing for most of the SOS protesters. Here were these alleged victims of trafficking and alleged tax evaders (another moot point all over on SOS’s site) in the flesh, there of their own accord, laughing and cheering together (and looking adorable, I might add). 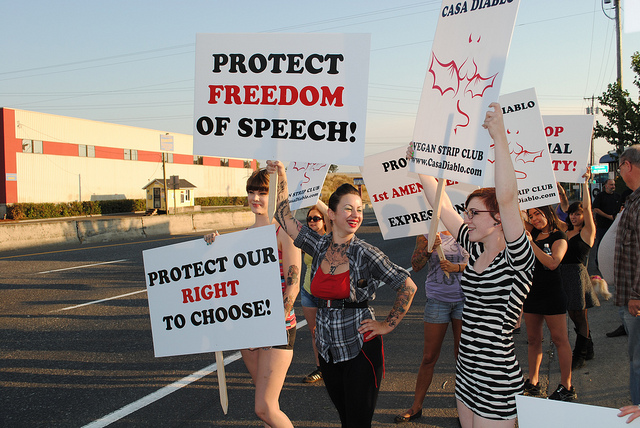 It’s unfortunate that I had to overhear the owner of Casa Diablo, dressed like an aging Juggalo in his custom-made “Casa Diablo 666” jersey, say, “Real men don’t buy girls… they just rent ’em!” I would prefer that “my” side have a better ambassador, but I’m not sure I even have a side. The world may have only two vegan strip clubs, but Portland has far more strip clubs than it needs and my heart sinks every time a new one opens. I say this coming from a place of experiencing the financial consequences of working in a city with a disproportionate supply to its demand, and not concern for our moral climate. (I do appreciate that it could be much worse—at least we don’t have the sky-high fees that come with Deja Vu monopolies experienced in other cities.) Ultimately, I believe that if the other fifty-something strip clubs in Portland have a right to exist, then Casa Diablo shouldn’t be treated any differently. In this case, I don’t see why they can’t become a juice bar and then apply for a liquor license, a process that many other clubs have had to go through.

Regardless, I wish the strippers of Casa Diablo the best, and hope that SOS Oregon doesn’t film their parking lot and broadcast it online and/or take photos of their patrons’ license plates like they’ve done to lingerie modeling businesses in Beaverton. I also predict that there won’t be much of a jump in crime due to the new Casa Diablo, if these maps of the areas surrounding other strip clubs that SOS Oregon have targeted are any indication. It’s a shame that those purporting to care about sex workers don’t actually talk to them to find how how they can be of real help—or at least make eye contact. 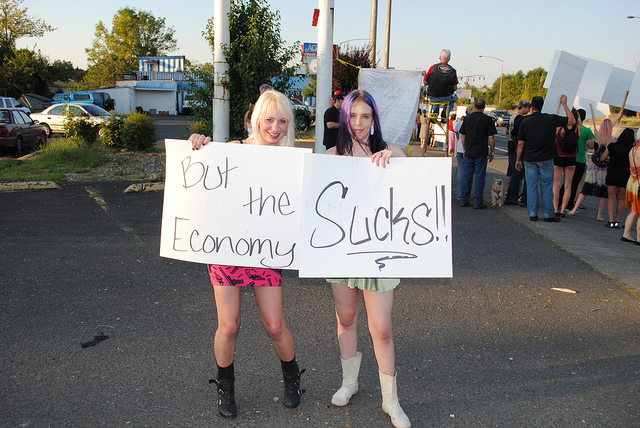 *Whose family also have a cattle ranch