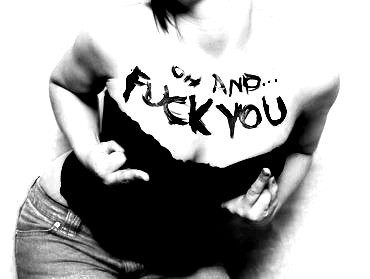 Any stripper worth her tear-away schoolgirl skirt can stage-dance to “(She’s) Sexy + 17” by the Stray Cats and make a few bucks. It’s not hard: the music is an irresistible anthem to statutory rape. If your audience is full of dudes in Ed Hardy shirts with brand new tattoos (or if you’re working in Portland, Ore., which may be redundant), toss it on and vacuum up the money with my blessings.* It doesn’t matter how old you are, because it’s not about you—it’s about your customers’ fond memories of hot high school girls they wished they’d fucked 20 years ago. Spin to win, Dancing Queen (and if the stage-lighting’s bad, slap a little Dermablend on that C-section scar before you go up).

There are certain hero tracks that nearly any stripper can make money to.  You’ve probably got a go-to list of your own. “Closer,” by Nine Inch Nails, “Do Ya Think I’m Sexy?” by The Revolting Cocks, that annoying singing monks song by Enigma, anything by Portishead or Sade—they work because they work, and if you’re there to make money, those classic tracks are your friends. I’m not here to cast aspersions on “Erotic City” (Prince) or “Fade Into You” (Mazzy Star). I’ve danced to them on many occasions myself. They’re decent moneymakers and most DJs have them at their fingertips in case you’ve shown up to your shift late without your CD. These songs are a stripper’s meat and potatoes.

But sometimes the house just hates you no matter what you’re dancing to. Maybe it’s your look: in a houseful of tiny blondes, you’re a chubby brunette. Or maybe you’re a woman of color, or an older dancer, or heavily tattooed, or maybe you just aren’t good at extinguishing that spark of intelligence in your eyes that’s anathema to customers who need to feel a sense of intellectual superiority in order to get their dicks hard. In any case you’re not what they’re looking for, and they’re determined to punish you for failing to meet their needs as consumers.

In those circumstances, it’s best to consider yourself a performance artist and to measure your success in customer outrage, not in folded dollar bills. A hostile crowd of non-tippers can be intimidating, but you can’t let them win. If your goal is to flip the bird to a contemptuous audience, look no further than the following list of my top five fuck-you songs.

1. “Crazy Train,” by Ozzy Osbourne.  Dancing on Bourbon Street is like flipping through an issue of “Playboy”—you’ve never seen so many tiny, tanned blondes in one place, and the customer service is delivered without a shred of irony. At the Sho-Bar, I shared the stage with women literally half my size who flitted up and down the pole like pretty little wood-sprites. While some customers loved me, occasionally the house would skew toward drunk 20-something frat boys, a demographic not noted for their appreciation of my kind of beauty.

When I was in a particularly sour mood, I’d pull out “Crazy Train.” Instead of dancing, I did frantic calisthenics—push-ups, jumping jacks, lunges, and crunches. I ran in place then turned around to squeeze my butt cheeks together in time with the music. I’d exercise ’til I panted, often running off stage, waiting for the next chorus, then running back on triumphantly with my arms raised, “Chariots of Fire”-style. One night I even took to the floor and did the running-in-a-circle thing like Curly from the Three Stooges.

2.  “The HIV Song,” by Ween.  Most strip club customers don’t like to be reminded about sexually transmitted disease, especially by a song that sounds like fucked-up carnival music.

3. “Jawohl Asshole,” by Life, Sex & Death.  It’s hard to goose-step in seven-inch heels, but sometimes you just gotta. Sieg heiling has never been so sexy! “How many times did you receive punishment, but commit no crime?” stutters caterwauling lead-singer Stanley. Best to freeze while pointing at the audience accusingly during this line. HOW MANY TIMES INDEED, SIRS.

4.  “Theme from Star Wars:  Imperial March, ” composed by John Williams.  The cool thing about this is that after getting ice thrown at me onstage by a group of dudes in Metairie who didn’t cotton to my sense of dramatic spectacle, I did six private dances in a row for a rabid Star Wars fan who thought I was hotter than Leia in her metal bikini. Usually, though, this track’s just a good one for looming around and kicking over people’s drinks.

5.  “Home Sweet Home,” by Motley Crue.  You know those little China Doll wigs that everyone was wearing for a while? Were you aware that if you turn the wig around backwards so the short part sits right over your forehead, the wig turns into a pretty convincing mullet? It’s true. Business in front, party in the rear, dudes! I like to bring a lighter for the piano outro—if I can make it onstage til the outro. Also, please note: a chick doing air-guitar is like a million boots stomping on a million boners at once.

If you’re not making money, you should at least be having fun. And what’s more fun that torturing the unappreciative mooks that should be ejaculating 20 dollar bills all over themselves just for the privilege of seeing your hot ass in a thong? If they don’t appreciate your hard work, at the very least they can amuse you. Revenge = priceless.

* See also pretty much any track by Billy Idol, who also seems to have a lot to say about underage lovin’.