Have you heard that SWAAY has an Epic Step campaign to create the first sex workers’ rights billboard in America? Epic Step is like the Kickstarter of billboards, so they need your donations in order to make this happen. Just look at how many anti-sex work billboards there are.

10. I feel like twitter is to blame for anything starting with “Dear,” including “Dear John” billboards in and surrounding Chicago, IL. “Dear Starbucks,” “Dear Netflix,” “Dear rain,” “Dear Man Soliciting Sex, We’re watching you in your sleep. Love, Chicago PD.”

9. From Rochester, NY: “Dear ‘John,’ Our relationship is over. I’ll leave your sweatshirt and your Coldplay CD in a box on the porch. Good luck ever finding someone as awesome as me again.”

8. What would this list be without at least one paraphrased Bible verse? This sign was a mile away from an Adult Superstore near Forth Worth.

7. This is a classic Shared Hope International billboard from Seattle. Something about the fact that it’s one of those rotating billboards really cheapens it. What are the other two ads? Bacardi and Hooters? Not to be a jerk, but how does one get trafficked nightly? Don’t worry, a strictly anti-trafficking greatest hits list is on the way. There will be plenty more images of huddled up white girls crying. 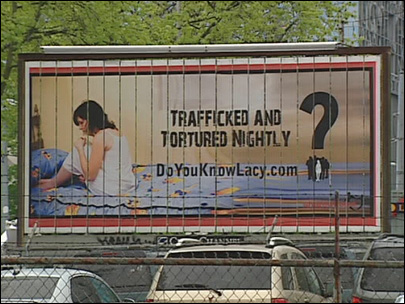 6. This billboard from the University of Benin in Nigeria states that not only are trafficking and prostitution one in the same, but they are both anti-academic and anti-excellence. From now on, I am going to start referring to things as “anti-excellence.”

5. A little shame can go a long way. This was near the Cowboys Stadium in Arlington, in honor of the Super Bowl XLV. In case you can’t tell, this is actually an electronic billboard where different mugshots would flash every few minutes. 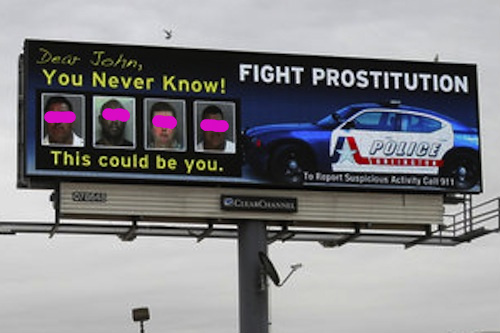 3. I get that this billboard from the foundation for AIDS research is supposed to be about harm reduction but I still feel like it’s saying, “I slept with a prostitute and all I got was this AIDS.” This sign reminds me of something that my strip club’s DJ says after a bachelor gets a stage dance: “Remember, there are three rings in marriage. Your ring, her ring, and suffering.”

2. Hey, the original Real Men. This is an oldie but a goodie from the early nineties. I never knew the Village People did this campaign.

1. These are currently located throughout the Atlanta metro area. Gotta love the Halloween jailbird costume. Imagine if you were trying to get into acting/modeling and this billboard was your big break. I feel like that’s the aspiring male actor equivalent of a tampon commercial. 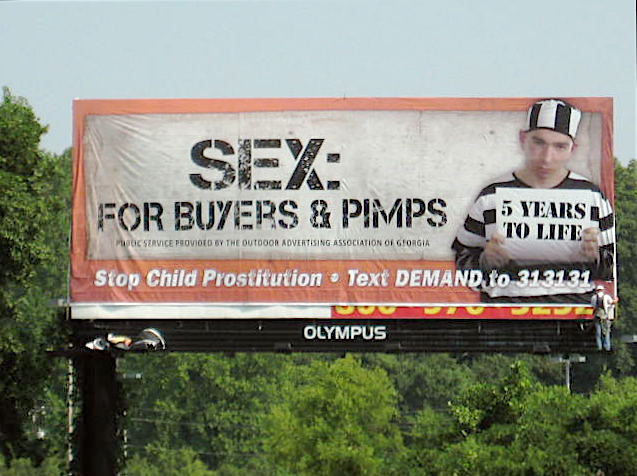