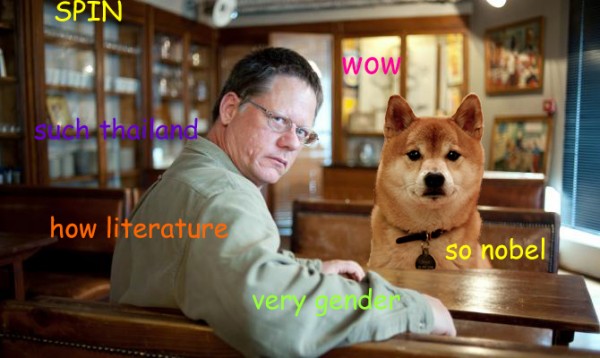 “If William T. Vollmann ever wins the Nobel Prize in Literature—as many speculate he will—he knows exactly what he will do with the $1.1 million pot the Swedes attach to the award. ‘It will be fun to give some to prostitutes,’ he says, sitting on his futon, chuckling, a half-empty bottle of pretty good bourbon between us.” That’s how Alexander Nazaryan’s profile of William T. Vollman for Newsweek starts. The tagline is “He’s written about prostitutes, crack, and war zones; is it time for a Nobel Prize?” No, but enjoy your rage blackout then get back to work on your book.

Meas Ratha was just a teenager when she was kidnapped and sold into a brothel as a sex slave in Cambodia. She told her tragic story in a documentary made by Somaly Mam, an anti-trafficking activist. Mam went on to win the Prince of Asturias Award for International Cooperation for her activism. Many agree that Ratha’s story spearheaded Mam’s behemoth campaign against trafficking and sex slavery. Thankfully, Ratha’s story has a happy ending. Oh, just one thing:  Ratha’s story is fabricated.

Business Insider sent a reporter into a legal Nevada brothel, Sherri’s Ranch. The reporter’s “expectations were shattered” (though he never states what his expectations were) and he draws this jaw-dropping conclusion:  “Sheri’s Ranch is a compelling demonstration that legalized and well-regulated prostitution can be safe, functional, and profitable.” Gee, does anybody else smell a Pulitzer?

Police in Surrey, B.C. are cautioning sex workers after the body of a working mother was found dumped in a park. Sergeant Jennifer Pound told reporters, “Our priority right now is to issue a public warning to those involved in sex work and those involved in a high-risk lifestyle.” A volunteer for a Vancouver sex worker outreach nonprofit said that the lack of similar support in Surrey contributed to that “high-risk.”

Indian director Vishwas Patil directed a film entitled Rajjo which is based on the life of a prostitute. Fear not, the children will not be corrupted! Patil swears the film will be a “family friendly” endeavor.

More evidence, this time tragic, that criminalization does not help sex workers.

File this under Almost Everybody Gets It Wrong: The French government is considering criminalizing people who pay for sex. Outraged, a group of  indignant male French “intellectuals” penned their opposition, “The Manifesto of the 343 Bastards,” in the style of Simone de Beauvoir’s famous abortion manifesto. Well! That left indignant feminists and government officials alike none too pleased. According to government spokeswoman and minister for women’s rights, Najat Vallaud-Belkacem, “The 343 salopes were asking to be able to freely use their body. The 343 bastards are demanding the right to use others’ bodies.”  Selma James  penned a fantastic op-ed for The Guardian, calling out feminists, clients, and government officials for their less-than-sympathetic take on sex workers’ issues. She writes, “One result of the absence of voices of influential and powerful feminists defending women’s right to work and in safety, is that the field is left open to men. The men, in the usual self-referential terms, defend their own rights as clients, not women’s rights as workers. Nevertheless it’s about time men admitted to being clients (intellectuals as that). But next time they should first check with the workers they are claiming to support, what they are proposing to say.”

Sex workers in the Indian city of Chennai are demanding their own red light district.

We know Rob Ford smoked crack, but what about Canada’s other Conservative Party members?  On Nov. 3 they “adopted policies” to  “reject the concept of legalizing the purchase of sex and develop a plan to target the buyers and third parties who profit off the sex trade.”

Bibiane Bovet has been removed from Montreal’s mayoral race. Her party says she was removed because she is being investigated by Quebec’s Autorité des marchés financiers, while Bovet claims her gender and her past as a sex worker played a role.

Do we see a pattern forming? Another strip club is being sued for violating federal labor laws.

Breaking news: some sex workers will be using the Affordable Care Act and CNN is ON IT.

Houston Beauty, a new reality TV show coming to the OWN network, will feature a cast member that is a transgenedered sex worker named Mia. Mia said in an interview with The Advocate: “I hope that viewers watching my story will be able to understand that I am human and no different from anyone else who has been brought into this world. We all face adversity in situations that life throws at us, but we are still one people and one existence.”

What type of prostitute are you? Take this handy Cosmo quiz to find out.

It is surprisingly easy to picture Chris Pratt as a young stripper.

Indoor sex work has officially been illegal in Rhode Island for three years. Matthew Lawrence, former escort, says this has made sex work more dangerous than ever.

The Sex Workers’ Network and the Dhaka Tribune collaborated to host a roundtable calling for “media houses to portray sex workers life and livelihood properly.”

According to the crack team at ABC News, a defense contractor was bribed by a Navy officers with HOOKERS! (No, not the services of hookers, but hookers themselves.)

Clutch your pearls, wring your hands, our precious Justin Bieber is all grown up. But who can we blame for his scandalous adult behavior?

An escort named Vincent William has an awesome website and apparently that’s newsworthy.