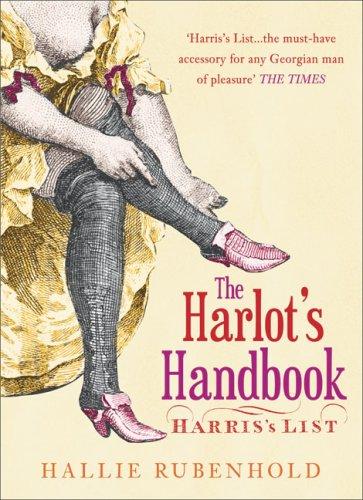 Harris’s List is an 18th century catalog of London prostitutes complete with (real) names, addresses, and descriptions of each, and it proves to me just how much men throughout the ages have loved reviewing prostitutes. They love it today, they loved it 250 years ago, and my guess is that even most Egyptian hieroglyphics and ancient animal cave paintings will one day be recognized as elaborate codes indicating which slave or wild woman gave the best BJ in exchange for some fruit. Not that it’s all about crude physical congress; Harris’s List attests that johns have always valued good education, witty conversation, and pleasant demeanor in their paid companions while frowning upon arrogance and high prices. There’s also an astonishing amount of sexism on display with the regular endorsement that if she weren’t such a fallen slut, Suzy Hooker would have been a proper lady. (“Notwithstanding the unfortunate bent she has taken;” “if she had not quitted the path of virtue.”)

Harris’s List was published annually for 38 years and written by various authors over that time, but the copy I read was one compiled from versions by original scribe Samuel Derrick—inspired by a pimp, though not a pimp himself—who, according to academic Hallie Rubenhold, died in love with a courtesan he couldn’t afford. That’s sweet cosmic justice since Derrick, or at least the narrator’s voice he assumes, is a bit of dick, though I’ve admitted before that I almost categorically hate reviews and those who write them, so I might be biased. You can judge yourself with the following choicest tidbits. Which lady would you visit?

Disclaimer: I am not a scholar of old-timey prostitute reviews, but I will do my best with these translations.

It might be useful to know that many of the reviews follow the same formula. First there’s a massive overshare of personal information, including how long the lady’s been in the business and details about the rogue who deflowered the girl without marrying her, thereby consigning her to a life of debauchery. (You can find this type of rude laying bare in some present day reviews, too, stuff like “she used to be in the military, but since we treat our veterans like shit, she had to start hooking” or “she’s still working on her degree at CUNY and she moved here from Connecticut.” Helpful.) Then there’s an overview of her bed skills, conversational abilities, and general demeanor, followed by a thorough markup of her eyes, teeth, skin, breasts, legs, and arms. It gets a little repetitive, so I concentrated on only the juiciest parts. Such as!

On Mrs. Chisholm “When a woman perceives her charms decay, and finds every day estranges her still farther from her juvenile beauty, she regrets the loss of every moment of her life that has not been consecrated to bliss, and risks an adventure she would formerly have spurned.”

Translation: This ancient (34 years old) broad responded to her midlife crisis by offering herself up for romantic rent in a desperate bid to salvage her ego and libido with whatever male admiration she could garner. What I found interesting about this charge is that while he’s trying to lay these neuroses on prostitutes, lots of my clients fit the above description. As they approach more advanced age (late 40s or 50s) they regret not having fucked constantly back when they were single/thinner/had more hair/could keep an erection without medical aid/hadn’t been beaten down for decades in a sexless marriage. This regret makes them bold enough to “risk an adventure” they once would have “spurned.”

On Miss J-nson: “She seems always low spirited, except when the liquor exhilarates her spirits; extremely illiterate, ungrateful to her benefactors, peevish, addicted to swearing and to low company; this girl in a short time will be in the lowest class of prostitutes; however as she is young, she is still worthy the attention.”

Translation: “Extremely illiterate” is one hell of a burn, isn’t it? But basically, since she’s just out of adolescence, you can deign to stick it to her in spite of her excessive cursing and no one will think less of you. You’re only human!

On Mrs. D-l-v-t: “Though not young, her charms have received no diminution from the hands of time, as she has always been very careful of herself, and eluding as much as possible the main action; she is celebrated for bush-fighting with a birch rod.”

Translation: Lady Dulivort (my stupidest guess at her last name) will beat the tar out of you and you’ll like it. Don’t you love how her “charms”—genitals? appealing facial features?—haven’t sloughed off from years of vaginal poundings from her suitors? Not like the rest of us prostitutes. Man, do we ever look rode hard and put away wet. It’s like every new penetration adds a wrinkle.  As he writes with surprise in a later passage of another woman, “though she has been many times besieged and bombarded; she looks well.”

On two women who struggle to offer much in the beauty department: (1) “As to her conversation, she is ignorance itself; yet good nature has force enough to bewitch and to continue the spell over those whom it has once bound.” (2) “What recommends her much more, is a pleasantry which makes her courted as the laughter-loving goddess, and the patroness of mirth and good-humour, every where.”

Translation: Ugly girls with sweet dispositions are worth more than hot chicks with bad attitudes. It’s touching that these two ladies are so darn sweet and pleasant to be with that they get good endorsements in spite of their physical shortcomings. Maybe all reviewers aren’t evil, shallow bastards…or are they?!

On Miss Wa-s: “Her opinion of herself extends from her person to her conversation, of which she is vain though ignorant. But her principal defect is of a love of money, which she seems to prefer to every thing.”

Translation: This 19 year old is always perfectly dressed and has the looks of a goddess, but she prides herself on her mental capabilities, which makes her ridiculous, and she appears to screw paying strangers because she wants their money and not because she wants to get off with a lot of random guys, which is unforgivable. This attitude is still so common among present day review board frequenters, I can’t even tell you. There’s nothing worse (in their minds) than a prostitute who values herself, particularly if she values herself for more than her looks. Reviewers regularly lay into women they assume are snotty based on the fact that those women charge more than they want to pay and/or screen more thoroughly than they like. There’s a pervasive “that uppity bitch doesn’t know her place” attitude. And don’t even get me started on the repulsive discussions about which escorts truly “love” their work and which are only in it for the money. (Hint: higher priced escorts are money-grubbing monsters.)

On discounts from one particular lass: “Any gentleman may have a night’s lodging for one pound one shilling, and half the money if he can do the business well.”

Translation: This is reminiscent of an old prostitute saying I just now made up, “Lay me right, stay all night. Lay me bad and pay double, you cad!” The book’s author regularly spills the beans about how far below their asking price these women are willing to honor. This, too, goes on a lot with current reviewers. If an escort gives a discount even once, it’s likely to haunt her forever.

On Mrs. Russell: “This lady has been some years in the service, in London, where she was much in vogue with the bucks and bloods of the town, who admired her for her vulgarity than anything else, she being extremely expert at uncommon oaths […] These she took care to fleece sufficiently; so that by her economy, she is now enabled to keep a country house and receives visits from only a few.”

Translation: Girl nearly retired with the money she made from dirty talk. Hats off, Sister! Who cares that Reviewey McJerkFace doesn’t like it?

On Mrs. Harvey: “She is very active and nimble and not a little clever in the performance of the act of friction, which renders her the more agreeable to all who have the pleasure of her embraces. […] She has been so good a friend to the good old cause that the number of travellers who have gone the path to the fountain of love have trodden all the grass away. This attracts a number of Votaries, whose curiosity leads them to examine those curious parts. […] When the sport is over, you may listen to the melody of her voice until nature again revives.”

Translation: She’s a Grade A grinder who gets herself off while being vaginally penetrated, in what is surely the first and only time most of these dudes from the 1700s will ever experience such a thing. The author assumes this means the reason she has no pubic hair is because she’s basically scrubbed it off of herself during all the intercourse. He has apparently never thought one might use a razor there, or go for the reliable method of cat’s dung and vinegar. (Is that what Nair is made of?) Then, as if she weren’t already wonderful enough, this exceptional woman sings to her clients while they wait for a second erection. I do not know how contemporary reviewers feel about post-coital singing.