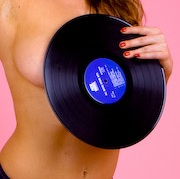 After platform heels and baby wipes, the most essential item in my work bag is my iPod. You just can’t depend on strip club DJs to have what you want to hear. Some of them are voracious consumers and producers of music with a catholic knowledge, and some of them don’t know “Bad Romance” from “Bad Reputation.” Right now I work with more of the latter than the former, so I always bring my own music.

It’s like a fun game to find new tracks, and while I’m not a very solid hit predictor (why is everyone dancing to the Black Eyed Peas when that awesome Big Boi record came out last year?), some clubs have reputations as just that—little focus groups of dancers and customers. In December, All Things Considered ran a short segment on the Atlanta practice of using strip clubs as a testing ground for tracks. Billboard found the subject worthy of a cover story back in 2006, and anecdotally, I can remember hearing musicians in Memphis and Detroit talking about this practice in the late 90s. It makes a lot of sense for the strip club to be a track’s first stop because it’s a place where you can directly observe the crowd, the ladies, and the sound on club speakers.

Shouldn’t that practice be even more refined now? By, say, going directly to strippers on the internet to test out your tracks? A couple of weeks ago, I got a message from my Twitter pal Justin Boreta of the Glitch Mob, an electronic music group with a passionate live performance fan base. “How do you feel about the White Stripes?” he asked. I told him they were a strip club staple for many dancers, and that while I wasn’t a rabid fan, I liked them fine. “We’re working on a tribute remix and I’d like to see how it works in the club,” he responded, and I leapt at the chance to pole-test the track. It’s about damn time I got a request like this. How my dozens of music biz Twitter followers haven’t thrown me on their promo lists yet in hopes that I’ll strip to their records is a mystery.

This track is a semi-dubstep remix of “Seven Nation Army” released last week in tribute to the band’s breakup, a literal interpretation of their announcement that “The White Stripes belong to you now and you can do with it whatever you want.” The extra bass and gritty mix distort the famous riff only slightly, leaving its instant recognizability intact. The beat remains consistent and upbeat for a dubstep-influenced track, and the drops are timed well for dramatic pole moves, floorwork, or poses. One or two moments in a track that can highlight a strong stage move add drama to the routine of sweeping bills off the rail.

To fill out the three-song sets we do at this club, I decided to use a Detroit band’s cover of a dance classic, the Dirtbombs’ cover of “Good Life,” and end with the Klaxons cover of “No Diggity” from the stripper playlist Boreta sent me last spring. Having my own in-jokes and references in my stage sets amuses me much more than it should.

The DJ looked at my iPod and said, “Glitch Mob! I love them. What is this?” A fellow dancer also asked about it while I was on stage and after I said “Don’t steal my song, bitch!” I told her who it was. Speaking of DJs, in case he’s drunk or coked up and forgets to cut the song at the standard 3:30, at 4:17 it’s not so long that my fellow dancers will be stuck giving extra-long lapdances. Teamwork, y’all.

General crowd reaction was mainly to the familiarity of the riff. Everyone knows “Seven Nation Army.” Marching bands play it at college football games. Partly thanks to its sports anthem status, it’s recognized with glee by a certain type of dude who also happens to be the type of dude who frequents the clubs where I dance. This makes it a good track for prime time, when you want something fairly energetic and/or recognizable. There weren’t any customer comments on the music, but that’s normal. Their focus is and should be elsewhere.

Here is an obvious truth about strip clubs: we want to keep that focus firmly in the here and now, eliciting an emotional response. Analytical thought is the enemy of lowered inhibitions and good times. This is why we find a balance between standing out enough to be noticed and being conventional enough not to make a customer overly thoughtful. It’s important to keep customers making decisions from the amygdala and not the frontal lobe. Unfamiliar music can activate analytical thought, which is why I will sometimes sacrifice enjoyment to profit and choose to dance to Van Halen instead of the Stooges (only sometimes, since I suffer from that condition where I think taste in music is so integral to identity that it hurts to be associated with something that doesn’t adequately express my special specialness). This is why I appreciate that this remix leaves the original intact enough to be immediately recognizable.

This track will go over especially well in any of your hippie and/or college towns. In particular I’m thinking of Denver, Austin, Northern California, and Portland. It’s best for places with eclectic playlists. Not suggested for aggressively rural or urban clubs. It’s versatile enough to pair with dance or rock. I had perfectly decent stage sets dancing to this track and found it a good overall fit for the club and my own playlists.

If you’d like to write about your favorite work tracks or share stripper music stories with us, email us at info@titsandsass.com.