TITS AND SASS SERVICE JOURNALISM BY AND FOR SEX WORKERS
Home Interviews Some of My Best Moves Can Hurt You: Elle’s Martial Arts Training

The teachings are applicable to many situations, and cover varying degrees of conflict. Knife disarms. Throws. Knowing the methods of proper deflection and blocking of strikes. Grappling on the floor. Learning how to fall. Limb destruction.

Since most violence against women is by men, and men typically possess greater physical strength, proportionally, I’m learning the methods of managing an otherwise devastating blow, and fighting through it.

And I’ve definitely used some of these teachings already. Just ask the junkie who attacked me at my favorite late night spot, last spring. Or the handsy lapdance customers who have attempted to manhandle me, only to leave the room minutes later with a sore index finger and a different perspective, no security intervention needed.

Incidentally, both of my instructors work as security guards in clubs throughout Portland, with 33 years of experience between them. Working in some of the highest-crime areas in the city has earned them a wealth of knowledge and experience in dealing with violence and conflict resolution. I sat down to speak the men behind my newfound sense of confidence; Ben Fowler and Justin Norton.

Why do you think that more men than women study martial arts?

Justin: That’s not always the case, especially in society nowadays. But the majority of it stems from the way we are raised from a young age.

Ben: I think, historically, men have been raised to fight and play aggressively, and women have been encouraged to be nurturers, but in the last 30 or so years, it’s beginning to change drastically. Women are including themselves in sports as more taboos are rejected, and they are heading for martial arts as well. Part of the problem with entering into a male-dominated martial arts class is that males can have competitive egos, and I’ve seen men go a little tougher on their female classmates. Traditionally, all differences are supposed to end at the door, and gender shouldn’t matter. I started a women-only self-defense class so that it would give these women a jumpstart, and that they would be able to integrate with males more easily. I’ve seen it work before.

In a city with so many sex workers, why do you think we don’t have many coming to classes?

Justin: A lot of people don’t take their own safety seriously until after something has happened. Part of the time, that individual will end up leaving the industry altogether. On the other hand, a lot of girls will allow a certain amount of abuse from customers, because they think that’s what they need to do to gain or maintain customers.

Ben: Honestly, for most people, it’s “out of sight, out of mind.” Of course, I could give you plenty of horrible stories, or read you statistics on rape, but to no avail. Life has too many distractions, and unless someone experiences an attack, they won’t consider making time to train. 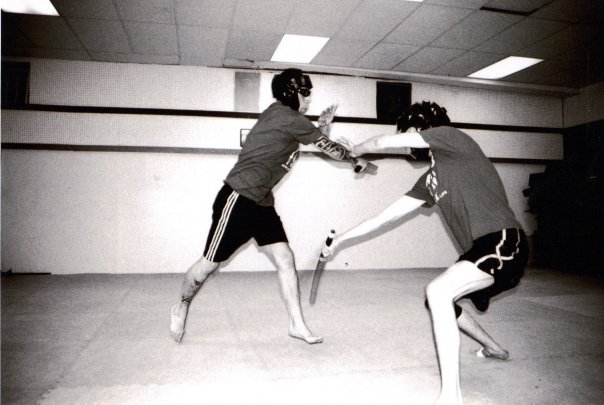 Do you know any sex workers who have been targeted or victimized specifically because of the nature of their work?

Justin: That’s kind of a tricky question. Yes and no. Thankfully, mostly no.

Ben: To answer this specifically; no. I’ve known several sex workers who have been stalked or harassed, to the point of restraining orders even, but none that I know of who were attacked. However, I just heard on NPR today that it’s estimated 28% of women in the United States have been raped, but the vast majority of them will take their secret with them to the grave. So, if no one is talking about it, how would I really know?

What made you decide to study your art?

Justin: Ever since I was a young man I felt the urge to study an art form that would help me understand how to control my mental and physical state of being. I remember watching Bruce Lee, with all of his grace and beauty. When I started bouncing for bars and clubs it became a necessity to study. It took me a few years to find Arnis, but it was pretty much love at first sight. Arnis is so practical to the real world, and the situations I deal with on a daily basis.

Ben: I’ve always been attracted to the martial art since I was a child in Hawaii. But I didn’t get serious about learning it until violence touched my life. Since then, I have a saying; “Simplicity plus brutality equals effectiveness.”

You both primarily work with strippers. What do you think would be some good advice for these girls, in avoiding being attacked?

Justin: Be consciously aware. Be aware of yourself, and be aware of your surroundings. Know your limitations, and know what your resources are. Don’t get too caught up in your thoughts. At the very least, take some self-defense classes, even if it’s just a couple.

Ben: To be aware. And don’t allow yourself to be too comfortable, because that’s when you let your guard down. Most dancers have regular customers and when they feel safe around these men, it can be problematic. Maybe you think nice ol’ customer Bob would never do anything, but remember that the overwhelming majority of rapes against women are perpetrated by a person familiar to that victim.

Can you tell us a little about the nature/style of Arnis?

Ben: Arnis is unique, because we are taught weapons first, and secondly we are taught using empty hands. Knowing about weapons is applicable. I’m an advocate of winning at any cost. It’s more useful on the street than wrestling. I’d rather have it and not need it, than need it and not have it.

Besides, the practitioners of Arnis are more well-rounded and able to adapt than many other fighting styles. For example, all of the fighting that you see in those Jason Bourne movies (The Bourne Identity, Supremacy, etc) is based off of Arnis. He can adapt to anything. He can use a pen, a towel, a knife. That is how we train our Arnis students, to be adaptable to any fighting scenario.

Ben: Again, it’s based upon weapons. Weapons are an equalizer. And the movements don’t take as much power and strength. It’s not based upon strength, like boxing. Boxing is dependent upon strength, Arnis is not.

Ben can be contacted at www.lakanarnis.com