TITS AND SASS SERVICE JOURNALISM BY AND FOR SEX WORKERS
Home Activism Nude for the Needy: A Stripper’s Mission To Pay It Forward

Ziploc bags overflow with disposable handwarmers, hand sanitizer, crackers and nuts. Thick cotton socks and toothbrushes, tampons and lollipops are piled nearby. A few women and a couple of men stand or sit along a heavy wooden table, chatting lightheartedly and stuffing goodies and toiletries into bags. Two children toddle around, munching crackers and playing with yarn.

Luchador in north Portland is holding its first Nudes for the Needy drive. It’s like many other holiday donation events, except for one thing: it’s headed by adult entertainers. Petite, bespectacled pole dancer Soren High brushes her dreadlocks away from her face as she hurriedly carries blankets and boxes around the room, delegating tasks to her volunteer friends.

“I’ve been homeless before,” she explains. “From about 2005, on and off until 2009. I lived in my car, with my boyfriend at the time. I lived under bridges. I know what life is like when you’re homeless, and I want to give back.”

When asked what sparked her desire to organize an event, Soren answers candidly. “I literally woke up one morning and felt like I needed to do something good. I started chatting about making blankets and giving them to family, but somebody else proposed a blanket making party, and here we are.”

The temperatures have been unseasonably frigid for Portland this year, with snow falling early in the month of December, and temperatures of 13 degrees recorded. The normal average temperature at this date is about twenty degrees warmer. “At least five deaths of street-folks were recorded within a matter of days,” Soren posted on her Facebook, rallying help in a hurry to hand out blankets and supplies on December 9th and 10th. I spoke with her about organizing in the community.

How did this begin?

Nude for the Needy started as a Christmas present for my family. I meant to make snip-n-tie blankets for everyone in my family and give them to a person in need as their gift. The idea bloomed into asking several of the girls that I work with to help with the project to come together and bring donations and a blanket. I know how amazing it feels to be given a blanket when you’re cold, or to receive food when you’re hungry. You remember that person for the rest of your life. 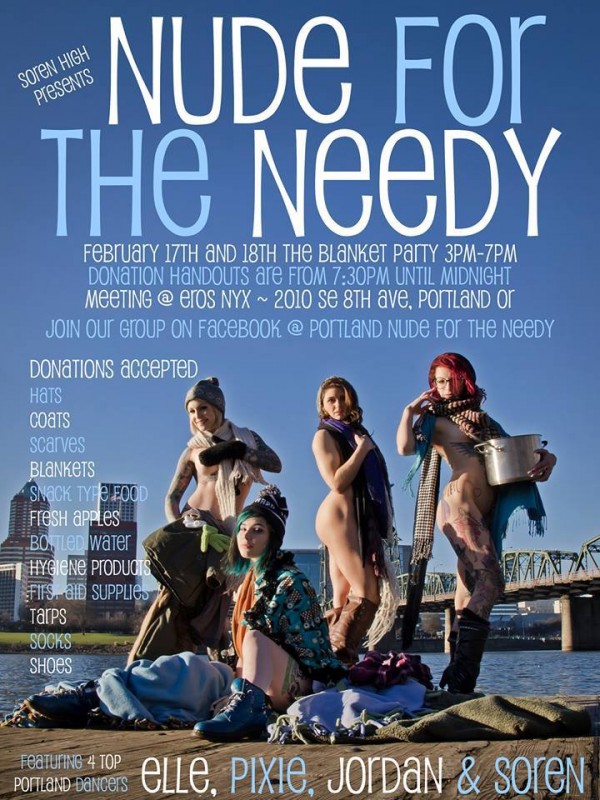 What was your experience as a homeless youth?

Being homeless in Portland is rough but it’s not impossible. I lived in my car for three months at first and then I was able to find a couple of couch surfing spots and then I was in and out of youth shelter for about a year living under bridges. I was able to get help through the youth shelters getting in to a transitional housing program. I was able to get a job and subsequently able to rise up and take care of myself. I have experienced some interesting and some horrifying things. When handing out donations last month, I talked to some of these people and they have experienced more harassment then most people even deserve. To be harassed and looked down upon by the general public is tough on your ego. A lot of these people seem broken-down.

What kind of items did you collect?

We were planning on distributing the blankets and items on the 14th at the ‘EfryTiing event (Everything) which is held every year. But this winter is extremely cold and these people needed the blankets now. So we both went out on foot and handed out care packages, clothing, blankets, food, hot coffee, hot soup, bottled water, dog food…anything they needed, we had it. We passed out 120 sandwiches, 96 blankets (36 were hand made) 150 care packages, five gallons of soup, several pounds of clothing, and about 10 hugs each. I think everything was worth probably around $2000-$2500. The Red Light vintage store, Lowe’s and Value Village donated clothing and handy tools and a friend from Costco donated $130 in snacks. 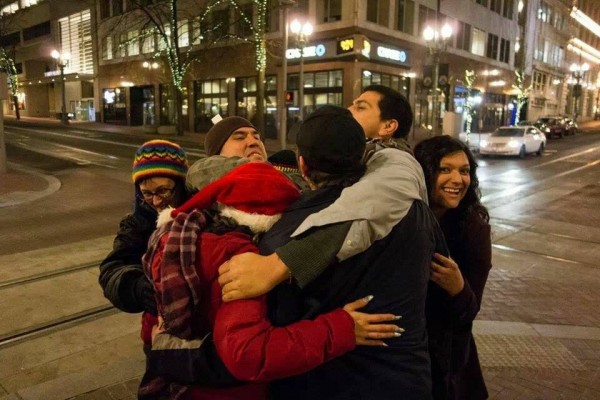 What was the turnout?

About 50 people were participated, whether in person or via online donations.. I had several people send me donations through Paypal which I used for blankets and care packages (totaling $400) and I had a couple people send me full size packages including blankets, toiletries, food, and a few clothing items from out of state. When it came to the actual blanket making and handing out of the items on the street, we had somewhere between 15 and 20 people show up in person to help. Three of them being family and two people traveled from Washington state simply to pass out donations.

Did any of the organizations like Lowes or Value Village know that this was run by a stripper? Do you think that they would have treated you differently?

Not that I know of. My friend Fre was the one who had asked them for donations. I think she just asked for donations for the needy though. Had they known that it was an organization for dancers I still feel they would have donated. Although Value Village is a Christian organization, I do believe that they want to help anyone.