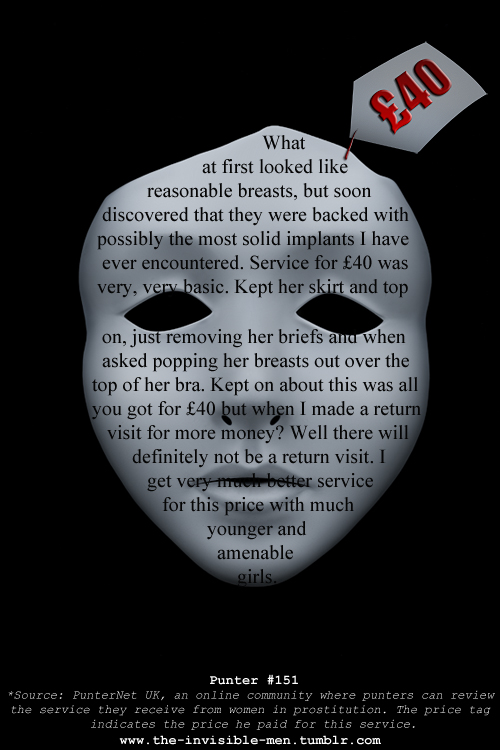 The only thing transparent in this project is its lack of care for currently operating sex workers. The project incites indignation towards the clients of sex workers as a whole. It’s been created to antagonize the public about the experiences of some workers. This insincere effort is thought to battle willful blindness to the sex industry, especially to our clientele—but only to the difficulties the curators choose to highlight. Things that THEY think are aghast. Not the things that WE are currently struggling to overcome. Not the things that WE actually want to address. Actual sex workers in the area, speaking through Scot-Pep, called the exhibition “exploitative, non-consensual, silencing.”

Canadian sex workers are fighting for their freedom to work. They are put down and intellectually bullied by feminists. Americans are running up a down escalator to get a sliver of respect for their industry. Sex workers are incarcerated for trying to make a living. Australians are trying to follow New Zealand’s fine example of decriminalization but find themselves caught in a media-incited moral panic at every opportunity. We are discriminated, dismissed and put down. It doesn’t matter in which tier of the industry you work—public stigma affects every single sex worker more consistently and effectively than reviews from clients.

And this is what ultimately makes this project tremendously unhelpful.

“Uncovering” the truth about punters by presenting carefully selected quotes from punting forums does not raise awareness about the things that really matter. When one “exposes” something, it suggests something was covered up. Invisible men are on the internet, in a public space, where anyone can access their content. They have let themselves be known for years. Compiling online testimonies that they themselves have written is not shedding light. This is not groundbreaking detective work. They have not captured a criminal on the run. They haven’t even wrung confessions from them. These men have taken time out of their day to report on their activities. The people who run this project literally copy and paste their words. A seven-year-old could do it. So what does this achieve?

Obviously they don’t actually care about the sex worker in question. If a client could find this sex worker and write out her location, physical description, name, and pricing, surely it wouldn’t take much effort to find her, call her up and say “Hey, you ok?” But that’s too hard for the Invisible Men Project.  Instead they use the experiences of these sex worker without their permission for their own agenda. The exact same way, I’m sure, the reviewers have not asked permission to review the sex worker. Why? Because the worker is irrelevant.

What really matters to the creators of the project is the degrading attitude in these reviews—thought of as transferable to the whole female gender. That’s the real concern. Revealing the disgusting nature of men is apparently news nowadays (feminism, have you taken a break?). Apparently this is more important than contacting the men in question or the workers they’ve seen.

We’ve established that they don’t help the workers in question, so what about other sex workers? By carefully selecting the worst content to be found, what does this achieve? Rancour and revulsion? The language of some punters is shocking, everyone cringes at the sight of it. But this isn’t a project that presents its content and says, “How shocking are men, right?” They present the content and say, “How shocking are the men who use this industry, right?” It’s very specific. Rather than individually shaming the man in question and punishing that person, they shame the whole spectrum of clients. 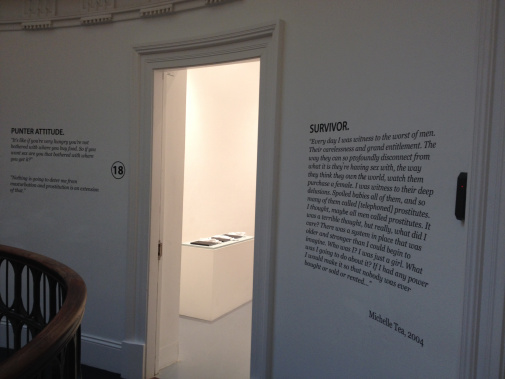 The fact of the matter is, you don’t know the context so you can’t print these reviews as factual or validate them.

We, the sex workers, saw the Invisible Men very visibly before anyone else did. And we have already discussed their behavior. We communicate with the men in question. We are the ones trying to actively sway their attitudes. This project has not shined a spotlight into a previously shadowed space of society. Activists have it on their radar. It’s awful, yes, but it’s on the bottom half of the list of things that need to be done to improve conditions in the sex industry. There’s a whole lot more that deserves attention before the misogynist language in reviews from clients. But anyone who’s not a sex worker does not care about these needs because they cannot relate. All that they can relate to and fear is that somehow these attitudes will apply to them.