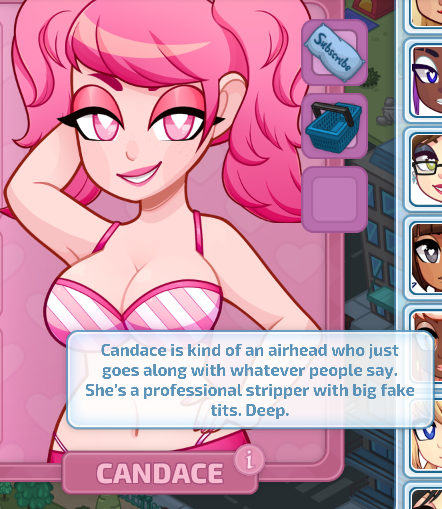 Every time I play a video game that includes sex workers as characters, all I can think about is how great it would be to be seen as a person. Usually, sex workers in games are just toys for the player’s entertainment or tools to deepen the protagonist’s story. Either way, they’re only there intermittently, just a sordid element to add to the grittiness of the setting. I can count on one hand the number of games that spend significant time with a sex worker character, let alone games that portray a sex worker positively, let alone games that are specifically about sex workers.

HunieCam Studio is one of a kind, at least in the sense that it does center on sex workers. The premise is this: you’re the manager of a camgirl studio, and you have 21 days to gain a lot of fans and make a lot of money. Given that I have seen so few games starring sex workers, I was excited right away about this game, but I also knew going in that it was probably going to provide awful representation. Indeed, the store page for HunieCam Studio on Steam paints our profession as gross, mentioning “disgusting fans,” calling the operation “sleazy,” claiming that the camgirls have made “poor life choices,” and inviting the player to “abandon your morals and disappoint everybody who cares about you!”

Many gameplay elements in Huniecam feed directly into normalizing abusive management or at least looking down on workers. For example, the player can send their camgirls to do escorting sessions in a so-called “sleazy motel,” and if they send camgirl Lillian there, there’s a chance she’ll say the line “Like I have a choice!” There is also a chance that when her session is over, the player will get a message saying that she contracted AIDS if she did not bring a condom (not HIV—apparently, in this game, getting HIV first is not a thing) and her voice line in this situation is “Please kill me.” 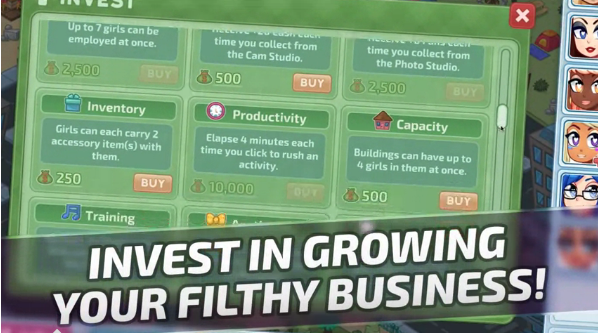 This happened to me during my playthrough and I found it horrifying, especially considering the history of AIDS and sex workers. Inserting this scenario into a game whose tone is so is so playful and lighthearted implies that the developers thought it was funny for a young sex worker to talk about dying after contracting AIDS because of you. This is particularly troubling considering how much AIDS has affected the LGBTQ sex worker population, while the game mocks the only character in it who can be understood as part of that community. Huniecam invites you to laugh at Zoey, who “tries a little too hard to be unique” and “sexually identifies as a cybernetic android.”

HunieCam’s minimal characterization of each of the camgirls plays out common stereotypes about why sex workers choose their jobs. Some of the reasons given for why the camgirls went into sex work are realistic, like Kyanna starting camming because she’s trying to support her family on more than a hairdresser’s income, or Jessie pursuing other kinds of sex work now that she’s not getting cast as much in porn films because of her age. Many of the rest paint the characters into the categories of “broken whore,” “fun-loving slut,” or simply, “object of ridicule.” Audrey needs money for her “awesome coke habit”—the player is supposed to see her as a personification of the dark reality of sex work and she is dehumanized both for being a sex worker and a drug user. Beli recently discovered her sexual side and found she’s “kind of a freak”—the player is supposed to see her as someone who does sex work out of pure nymphomania, which is especially troubling considering she’s a woman of color. Lillian is just trying to piss off her parents—a teen to be laughed at for her embarrassing acts of rebellion. While sex workers choose their jobs for many reasons, sometimes including the ones these characters give, the presentation of these common fantasies about sex work erases the fact that for most of us, it’s just a way to make a good amount of money in a short amount of time.

However, HunieCam—perhaps inadvertently—does include some gameplay elements that illustrate many sex workers’ realities. The player can unlock a hard mode—which is of course called “Rock Hard Mode,” because the developers must be 12 years old—that feels similar to survival sex work. I found that the 21 days depicted in this mode were one unending struggle to just keep my money out of the red. I often made choices I wouldn’t ordinarily, like sending a camgirl to escort without a condom, simply because I needed the money. Whether the developers intended it as such or not, it felt like the endless grind of not having enough money no matter how much you work and making concessions on your boundaries because you need the income. It was a confusing experience to see my own struggle as a survival sex worker represented and at the same time feel like I was being made into a joke because of it.

Huniecam also depicts the amount of work that sex workers have to put in before they make any money at all. Doing photo shoots, shopping for toys and condoms, getting fashionable clothing, and buying the alcohol and cigarettes that will help one push through a shift are all game mechanics that the player must engage in if they want to make the most money and gain the most fans. There is even some recognition of the phenomenon of burnout in the game. When a camgirl becomes too stressed to work, the player must send her to a day spa so that she can relax before she is willing to do any work-related activities again. Considering that most civilians don’t recognize how draining sex work can be, the inclusion of this de-stressing process felt weirdly like being seen. Mostly, though, the gameplay elements that are positive towards sex workers in Huniecam are overshadowed by how often sex workers are made into punchlines throughout it.

When it comes to actual gameplay, HunieCam Studio falls short. It’s a typical resource management game with no unique mechanics compared to other games in the genre, and a player could finish the game without even thinking about sex work much. In fact, if the minimal story and characterization were slightly rewritten, it could be a game about anything. One could pretend the camgirls were actually going to the studio to record non-sexual videos and it would be the same game. HunieCam has nothing special to offer except some vaguely sexual content.

After playing HunieCam, I kept thinking about how it’s a great example of how not to make a game about sex work. But I kept playing because I’ve never seen a game specifically focused on sex work before. That’s a testament to how desperate one can be for representation of one’s experiences.

So, wouldn’t it be great to be seen as a person? In HunieCam Studio, sex workers are just objects the player manipulates to make their numbers climb, and the small amount of characterization they get further reinforces their objectification. But it is entirely possible to humanize sex workers and make them the subjects of their own stories if game developers were willing to consider us as protagonists and characters in our own right. To accomplish this, they don’t even need to change their games much—just give us voices and allow us to exist in the game space without violence and ridicule.