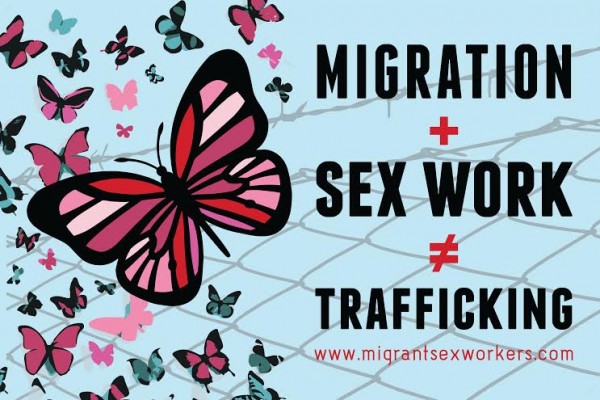 I interviewed Toronto’s Migrant Sex Workers Project co-founders Elene Lam and Chanelle Gallant as well as Migrant Sex Workers Project member Kate Zen over video chat. The first part of that conversation, edited and condensed for posting, is here. The group’s vital representation of a population often absent from sex worker activism inspired me. I was eager to speak them about  their unique justice themed work—advocacy grounded on the autonomy and leadership of migrant sex workers themselves, rather than the rescue themed approaches which wrest that autonomy away from them.

The MSWP issues four demands to Canada’s government on its website:

In the second part of our interview, we discuss these demands as well as conditions on the ground for Toronto’s migrant sex workers.

Kate Zen: First of all, the racial visibility of migrant sex workers makes it so that migrants are more readily targeted than any other group [of sex workers]. You see this in Toronto specifically with the targeting of […] Asian massage parlors, with the rhetoric of “all human trafficking must be going on with THOSE people.”I think [for] migrants, because of language barriers, [it] makes it much more difficult to defend what is going on inside. And because of migration and because of immigration barriers [it] makes people much more vulnerable to being deported or further marginalized. It makes it more difficult for people to speak up.

I think the other side is [that] they don’t say anti-immigration law, but actually the anti-trafficking law is an anti-immigration law. They start already at the border control—because when you enter the border there’s so much screening to see whether you’re vulnerable to be[ing] the victim of trafficking. But they are being taken out—so it’s how to stop the people who are moving from the Global South to enter Canada.

But I think what they are doing also creates a panic of the society, and get the support from them. You make the people [have] more fear of the sex worker because they think, “If my neighbor is a sex worker that means they are [involved with] organized crime. If I have an Asian sex worker near me that means I have this trafficking victim near me I should report.”

Chanelle Gallant: While there are migrants in the sex workers’ movement broadly, I see a real gap and a lack of representation and leadership of racialized migrants. I think one of the impacts of criminalization is that it really makes organizing and advocacy more difficult for racialized migrants because they’re at a whole different level of risk than non-racialized migrants.

You state your agreement with broader migrants’ rights movements when you echo their rallying cry that no one is illegal. You write that, “Undocumented people aren’t jumping the queue—there is no queue for many of us!” Can you explain a bit more about this?

Chanelle Gallant: There’s a lack of recognition that many of the conditions that we consider trafficking are very common in the legal working conditions of migrants. Being tied to an employer, facing abuse, having wages stolen, forced labor—those abuses are rampant in the situations of temporary foreign workers, where there’s very very few if any labor protections.

Kate Zen:…In the US we have this sort of doctrine of what free trade is supposed to mean, which is actually the free movement of capital into other countries and the free exploitation of labor abroad but not allowing actual free movement of people. So that is one of the biggest hypocrisies in the idea of free trade…

Immigration control is very much a eugenics experiment and has always been. In the US there was actually the Chinese Exclusion Act which for almost a 100 years excluded certain people who were not considered racially a part of what was going to be the fabric of America. That meant first of all, making sure women couldn’t enter. And when women did enter, since they entered at smaller numbers than men, making sure to stigmatize these women, saying that all Chinese women were probably prostitutes. And that created the Page Act,  which preceded the Chinese Exclusion Act, which actually barred Chinese women from entering the country on the premise that they are all prostitutes. So whorephobia, and the methods of whorephobia, of using this sort of moral panic, preceded a much greater form of oppression. And you see that happen over and over in history, where you use sexuality and the moral feelings around sexuality to defend other types of racist and classist policies.

In Canada there are a lot of temporary and seasonal work visas that allow people to engage in particular types of work but [they] are never going to be allowed to be permanent residents or citizens. So they’ll be deported after a certain period of time and then they can only re-enter after a certain period of time—this is true for agricultural workers. Other restrictions include, for example, domestic workers being tied to a specific employer, and not being allowed to work in other places, leading to a higher risk for labor exploitation. So when you’re talking about jumping the queue—there is no queue for certain types of people that are not welcome in the country…There’s certain types of people like professionals and other folks who have […] a go-free card across the border. For the [other] people that are allowed in, you’re only allowed, often, to do very, very low wage labor, and that labor is controlled through your visa, so you don’t actually have a chance of escaping that and being integrated into the society.

You write in your group’s new femmeifesto that you don’t believe that the anti-trafficking system is one that is broken, but rather that it’s an intentional, effective system serving governments, nonprofits, and corporations in the Global North; controlling the movements of migrants away from the Global South and ensuring a pool of exploitable, unregistered workers for cheap labor. Can you elaborate on this?

Elene Lam: Anti-trafficking initiatives and measures actually give the government more power and give them a reason to have more money. [For example,] recently, Ottawa, after they had a raid, they employed 20 police to form a group to target trafficking.

Many people see sex work as the exploitation of women, but they don’t see [that] actually sex work is the resistance of…exploitation of migrants and women. For example, lots of [migrant] women,they choose to work in sex work because they are less exploited than when they work in [a] factory, when they work in [a] food processing company, or they are in marriage. So I have heard a woman that, because there have been so many raids and it’s unsafe in the [sex industry] working environment, so…in order to stay [in the country], she stays in a relationship with her partner, even though [they are] so abusive. So that you see how when they are against sex work, actually it’s pushing women back to the exploitative systems they are resisting.

Kate Zen: …[T]he anti-trafficking movement has actually in many ways been generated by moral panic from the United States after September 11th, and under the Bush administration, to fund particular types of carceral politics in the United States. That means funding US involvement abroad; funding the military; after the [passing of the] JVTA [Justice for Victims of Trafficking Act] this past year, funding additional units in ICE, immigration control; funding policing units that are supposedly there to help trafficking victims. So a lot of the actual funding in legislation that is geared towards anti-trafficking goes towards the building of the police state in the United States and the building of US infrastructure abroad. And it also creates this big sector of service agencies that are not accountable to the people that they’re supposedly serving…

Chanelle Gallant: I think the sex workers’ rights movement often doesn’t realize that sex workers are being used in a larger game. That the regulation of sex work is really not ever just about sex work. The creation of a fake war on trafficking functions for much larger global goals, capitalist goals. Very rarely do I see the sex workers’ rights movement acknowledge that our movement is part of a movement against borders, against colonial borders, against capitalism, and that what’s happening to sex workers is part of one piece in a larger game around global capitalism. And our resistance needs to be connected to that resistance too. [But] I also want to give credit to the fact that sex workers have been completely isolated and abandoned by the Left. So it is absolutely not entirely on sex workers that they’re often not seeing the connections between sex worker oppression and other forms of oppression. [But] part of that is straight up racism and colonialism and classism [among sex workers] and I’m just going to name that.

Does anybody have any elaboration on what needs to be done most quickly and imperatively in order to prevent this violence against migrant sex workers?

Kate Zen: One [thing] is to have non-enforcement of anti-sex worker laws, and particularly in ways that are not usually thought of as criminal law. So, the way that municipal licensing uses its sort of agenda and uses its particular regulations around hours and other things as a way to shut down migrant businesses that are suspected of being sex businesses.

A moratorium on detention and deportation of all migrant sex workers—it’s extremely important that we are using resources not towards any kind of harmful way of addressing exploitation but actually, encouraging labor organizing, recognizing that migrant sex work is a form of work, and encouraging more organizing along with other informal sector workers. Making that an apparatus that actually has a connection to city governance and to state governance. And making people accountable to make sure that the specific needs of informal sector workers are actually addressed. So making sure that migrant sex workers themselves are the ones coming to the table, whatever protections are needed to ensure their anonymity and their immigration status. As community organizers, the job of any organization, a successful community organization, is to make ourselves redundant, right? Is to make ourselves obsolete.