I’m a little nervous to have been tasked with following in the footsteps of Kat’s outrageously hysterical Top 10 Anti-Sex Work Billboards. Mostly just because hers was so good but also because, as Kutchergate proved, anyone who criticizes the methodology around anti-trafficking measures may be automatically labeled a trafficking-loving monster. But I’ve probably already made my bed on that front, and dammit, somebody’s got to talk about how ridiculous these ads are.

10. I couldn’t rank this project higher because I couldn’t get too far into the website with either Safari or Chome and I think Lion is destroying my computer. What I did get to see was a super cute guy sucking on his fingers and grabbing his crotch, which totally did it for me even though I’m sure he was mistaking me for a man. Then I came back for seconds and got a Suicide Girl with a rockin’ bod dancing around like she was in a music video. (I suspect the video might be for that great rock classic, “Surprise! She seems willing but you’re a rapist.”) 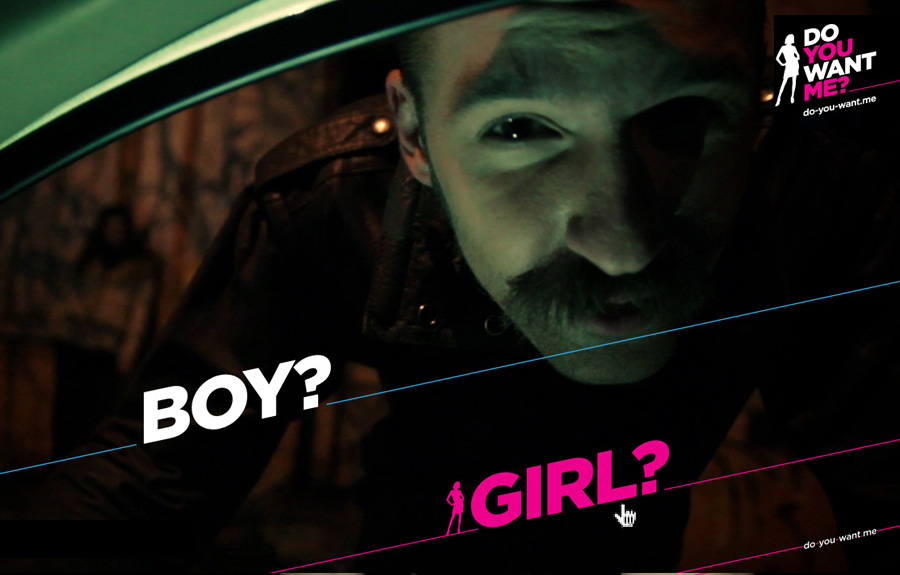 Spoiler Alert: Bubbles filled me in on what happens after the point where my screen froze up: “The boy dances around some, then the scene changes to the boy being a junkie and sitting at the feet of some ominous looking dude. Then it says something about how a picture of a man who understands is worth a thousand words and offers you the chance to share your link on various social networking sites. It is not entirely clear what the point is? And hey, the girl gets beaten instead of drugs.” Of course she does.

9. It’s fascinating to me when an organization doesn’t even try to hide its continuation of the (universally discredited) white slavery panic. Apparently, lots of white British girls are forcibly abducted by strangers and the most important role of the general public is to “not be oblivious.” Come on, no one even suggests self defense classes as a more useful response? What really bugs me about this video is how the menacing guy’s just beat the crap out of victim girl’s face and head, and her first response is to tug down the hem of her already knee-length skirt even though nothing he’s done up to that point has been remotely sexual. Preserving her unthreatened innocence is a higher priority than preventing brain damage.

8. What grocery store devotes this much horizontal shelf space to pickles? And are those baby dills kosher? Zing! 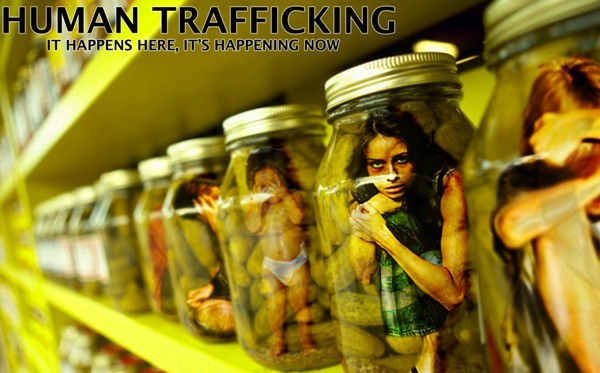 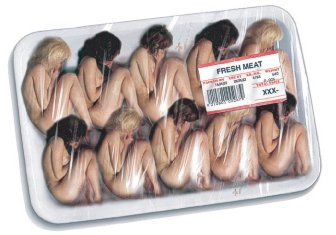 6. From what I could discern, the above idea was the weak predecessor to a Luxembourg campaign where these trays were actually placed in the butchery section of markets. Because it’s never problematic to perpetuate the exact mentality you’re criticizing. The text translates to, “If you’re buying a prostitute, you’re financing human trading.” (Or that woman’s rent or her kid’s meals, but hey, let’s not split hairs.) 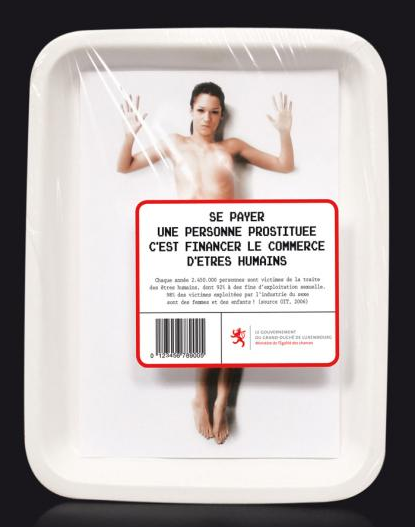 5. You’re going to be distracted by a few things while watching this ad, like wondering why the girl is told to sing and how a thirteen year old got the money to pay someone to smuggle her into another country. But here’s what you should really think about: this ad, made by US Border Control, aired in Mexico and Central America and only later in a few of the Southernmost United States. What earthly purpose does it serve besides trying to terrorize young women out of immigrating and frightening those who’ve already crossed the border into telling family members that it’s not safe to join them? This ad is not anti-victimization, it’s anti-immigration.

4. Ass Crack here really gets my dander up. Why do we have to see so much butt cleavage to understand that this woman probably shouldn’t be incompetently wound up in packing tape? Would a clothed bound woman, or even a chastely taped nude woman, not be sufficiently attention-getting? How can the viewer take seriously the instruction to stop “exploiting” women when the image itself can be considered exploitative? (Andrea Dworkin and Catherine MacKinnon would ban at least 90% of contemporary trafficking campaigns.) Most of these ads are titillating in order to shame the viewer’s titillation as malevolent and criminal. But if being attracted to this woman’s ass crack is bad, why are you baring her ass crack to me!?

3. It’s convenient that we don’t see the face of the woman in the above ad because trafficked women don’t have uses for their faces anyway—they’re basically mutes who don’t need to be listened to but who rather require a bunch of completely uneducated strangers to speak “for” them. Tyra Banks would not be down with these weak facial expressions, Ladies. My guess is they’re all thinking about the better-paying fashion shoots they were heading to after this. 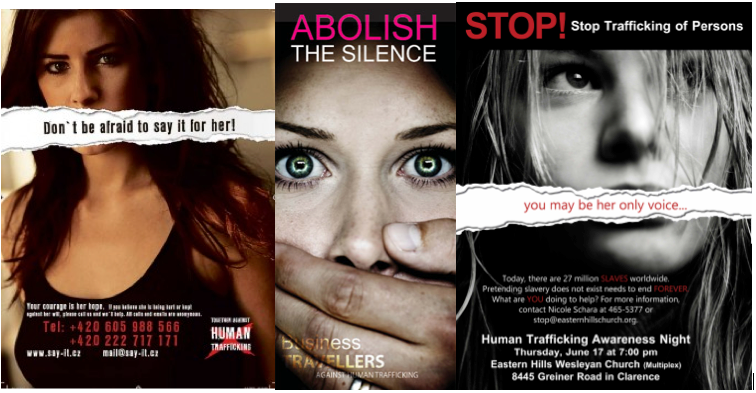 2. Last year’s “Women To Go” window display in Tel Aviv set off a frenzy of media coverage. You have to watch to the halfway mark of this video, where the guest imagines pleased men saying, “this is great—I can get a woman to go!” only to have their hopes cruelly dashed moments later when they realize they’ve been tricked. (Even the news anchor is like, “Say what?”) As with most trafficking campaigns, this seems less concerned with the idea that someone might work in bad conditions, earning unfair wages, without recourse against those mistreating them, than it is with the idea of “buying” women, aka prostitution itself.

1. There can be no others before Amnesty International’s Socialite. Hairless, toned white legs with pedicured toes clad in Jimmy Choo heels, ferociously chained in 24 karat gold jewelry from Kiki De Montparnasse? Now that’s what I call trafficking! Let’s not be oblivious: this woman needs our voice to help her schedule her next leg wax. Citizen, are you up to the task? 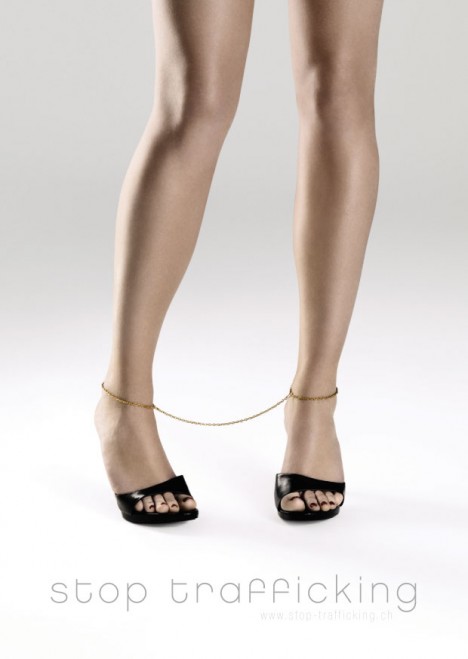