TITS AND SASS SERVICE JOURNALISM BY AND FOR SEX WORKERS
Home Cops The People vs. Kimberly Kupps 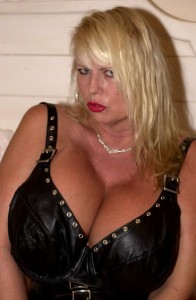 First, can you tell us who you are, what you do, and how long you’ve been involved in the adult industry?
I started dancing in Houston, Texas in 1980 at Ricks after seeing an article in Playboy magazine that the dancers there could make up to $1,000 a day. Having worked at the University of South Florida as a medical secretary, hardly making anything, it looked very attractive. I stayed there for almost 10 years, then I heard of some girls getting large implants and doing magazine shoots and touring as feature dancers. Since my husband and I both loved to travel, we went for it in 1990, going with the name Kimberly Kupps (Kimberly since I liked Kim Basinger). I danced all over the US and Canada, also shooting over 100 magazine sets (for Gent, Leg Show, Busty Mag etc). After a few years, the fans and clubs wanted to see the feature dancers “in action.” Having been with a husband who loved me in all situations (we are both nudists) we jumped right in and went to Los Angles and started shooting XXX sets on a regular basis. That is fun, and you start getting a following of fans who then come to your stage shows and buy items such as magazines you have been in and Polaroids taken with them after the show. After over a million miles of driving all over the US and Canada, working 6 days a week, the business got less attractive since more and more girls were starting, and by then it was not a unique thing any more. When the World Wide Web was starting, we opened KimberlyKupps.com, both running the site and taking the photos.

Was your web site your sole source of income, or do you have a day job?
Having created an extensive worldwide fan base due to the 100+ adult videos I have been in, it creates an opportunity of ongoing sales of “personal videos,” which is when a fan creates a idea that he wants to see me doing, mostly by myself talking to the camera saying “his” name so he gets the video as if I was there with him. The website is our primary source of both income and reference to others of where I might be performing or shooting my next video. Both my husband and I have met some wonderful people all over the world.

What charges are you and your husband facing, and what are the maximum sentences and fines you could be looking at?
13 charges of selling obscenity, one felony of commercial distribution of obscenity for the both of us. We have not asked the sentences nor fines since we wholeheartedly believe in our innocence and the US’s freedoms.

How did the local and national media react to your arrest?
From what our friends told us about the media coverage (in the Lakeland Ledger) and a few TV news reports, the commentary has been 95% positive.

You’ve started a defense fund to help with your legal costs. How has response and support been from others in the sex industry?
Support has been okay, but since it is not yet a national issue, others either forget or do not care since it is not their problem. But if [the state wins], the next county over will say, “Hey let’s do it, too,” and it starts a domino effect.

Is there anything else you want people to know about you and your case?
It DOES affect all citizens of the US to choose what they want to view in the privacy of their own home. This invasion of our privacy and first amendment freedoms need to be defended at all costs! Please do not take the freedoms you think the constitution guarantees for granted.