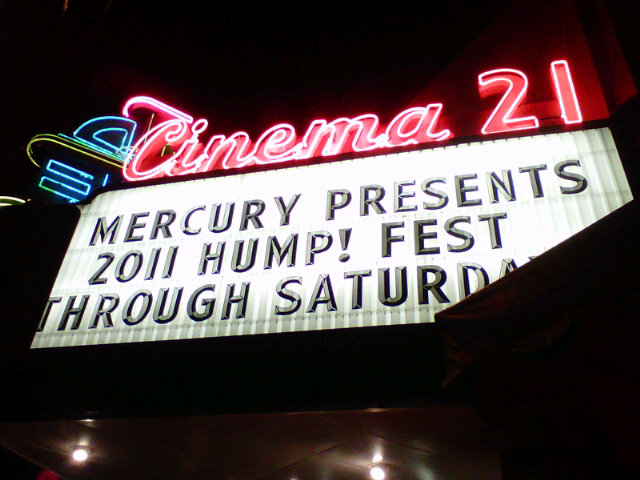 Standing in the long line outside of Portland’s Cinema 21, I was immediately struck by how chipper the crowd was. An equal proportion of mid-twenties to late-thirties men and women chattered excitedly in the rain. I actually stood on my tiptoes to peer down the block, looking for solo older men lurking in the shadows, but didn’t see any. All six Portland showings had completely sold out and the line of hip young people wrapped around the block. Kat overheard a guy tell his girlfriend that they were at the new Harry Potter movie, which didn’t seem unreasonable given the mob of excited people.

And with that, the theater darkened and the clips began.

What followed was approximately one hour of moaning, giggling, both intentionally and unintentionally cheesy acting, outrageous props and costumes, a few vaginas, and lots of penis. Also, lots of me covering my face with my hand and peeking through my fingers. The submissions ran the gamut from sexy, shocking, silly, to nearly alarming (that whole coworker—consensually—having a knife inserted into her vagina thing). A spoof on James Bond’s Goldfinger. A gay priest performing his last rites on a married man. A bicycle geek’s masturbatory fantasy. Some dirty cartoons. Atari Joysticks. A perfectly choreographed musical bit done to “Teenage Dream” set in a locker room. 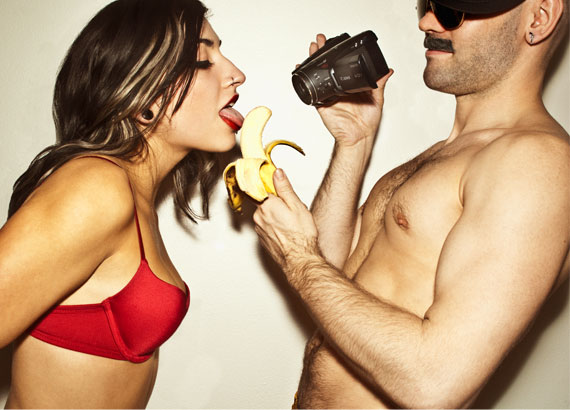 As ladies who bare our vaginas on a stage several hours per week, it was immediately apparent that there was a lack of pussy on the screen. Typically when I think “porn,” I think crotch shots. They were only briefly shown, if at all. We found it interesting that more women would sooner have partially-clothed sex on camera than be fully nude. The men seemed less shy, thankfully, so there was no shortage of penis shots for viewing pleasure. Gay and bi male submissions made up a large percentage of the festival, which should come as no surprise considering that Hump! was started by Dan Savage to be a “celebration of sexuality.”

It was impressive how polite and mature the audience was; they clapped for all submissions and no one was disruptive. Post-viewing I spoke briefly with Katsumi Ko about her experience entering Hump!, “I am for sure entering the festival next year and you can bet that I am taking home Best in Show! I just can’t believe that my first ever film I made was chosen. It gives me the confidence to do something better next year.”

Thank you to Kat for her assistance on this piece.