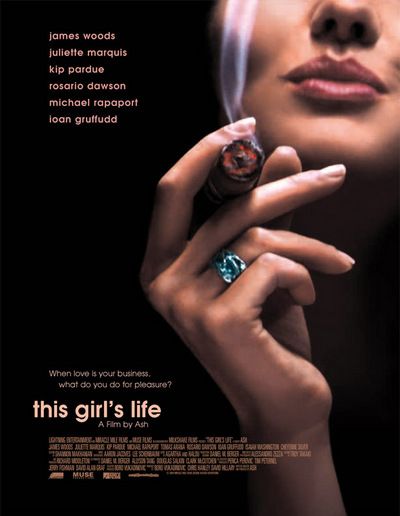 I was initially really impressed by This Girl’s Life. The idea of a sassy, intelligent woman who does her job and doesn’t seem to take it too seriously really made me smile. I like when people treat sex work like a job, because that doesn’t happen in every film. Then I kept watching—it gets crazy!

Moon (Juliette Marquis) is a world renowned porn star. Her old man has Parkinson’s, and he knows what she does for a living. She has a circle of cool girlfriends outside the business, and they tell sassy jokes at cigar bars (I wish I smoked cigars). She works for a guy who is at once a really sweet dude and also capable of being really cruel (but only to other workers, specifically the only black woman in the film) and is waffling on signing a contract renewal. She also begins dating a guy who Kat thought was pre-med because he wears a beanie, but he’s an actor… maybe he’s playing a pre-med student in a movie?

First let’s talk about those friends. Dude. So one of her friends gets engaged and she asks Moon to come onto him so she can see if he will cheat on her. She says she asked this because Moon has sex for a living. So that means Moon’s cool with (potentially) doing your boyfriend so you will know if he’s capable of cheating? Naw, boo. That’s cray cray. But Moon goes along with it without even questioning why her friend didn’t ask anybody else, or why she thought Moon’s profession was a good reason to ask her. Her friends also kind of go in on her, saying she’s wasting her intellect doing what she does. I would have dropped those birds.

After success with that original foray into espionage, she decides to do that for a living…and ends up getting into a bit of trouble for it. So many of the dudes seem to go for it that I felt bad for the ladies (and guy) Moon will inevitably have to report back to. I wonder if any of them flipped out on her, but we never see her debriefing people afterwards, just dudes with their hands up her skirt. One guy goes ape shit, though. She goes to his car lot, comes on to him, then realizes she’s gone to far with it and tries to leave out a window, and he catches her in the alley and tears up her car. Then he stalks, and ends up raping, her. I was cringing through all of this! I barely finished it because of all this drama.

Kat says a real sex worker would have (a) Driven away instead of sitting there while a mad man theatened her life for exposing his cheating ways, and (b) Invoiced his wife for that damage to her vehicle while finding out he was a cheating prick. I have to agree. She could have also called the cops. She’d probably have had to be secure in what she was doing to do that though.

Next, the character (or the acting.) Moon’s character was pretty flat throughout the entire film. Not Sasha Grey in The Girlfriend Experienceflat, but pretty close. I felt like she rode the line between super chill and borderline-boring kind of well, but that doesn’t count since I am pretty stoic in my real life. She was kind of “not there” if that makes sense. Juliette Marquis plays a porn star in a Law and Order SVU episode called “Sacrifice,” and her acting there is so much better than it is here, which makes me wonder if she’s better suited for TV than films. It also makes me wonder if she’s been typecast a bit, as the film came out after the show. Maybe someone saw her and thought she’d bring that spunk to this film. No such luck.

Also! Her boyfriend (?) was so strange. On the first date he visibly recoils when she says she’s a porn star. He mentions that he couldn’t take her home to his parents because of it, but that he is turned on. So basically he can’t treat her like a real girlfriend, but they can fuck. OK. He then gets weird when she has to go do things other than sit around and titillate him with her sexy job. Then, when she comes to him for support (which I did not understand—if I need support I’ll go to someone who thinks I am a human being, thanks) after getting her car smashed in, he says something to effect of, “You’re finally feeling something real…”

UGH! She has to be crying to be feeling something? It was like he was saying that her usual stoic self was just a wall and this crying, unnerved, frightened person was the real her. I wanted to vomit. Then there’s the fact that, after initially treating sex work like something she just does for a living and not a big deal, she ends up trying to leave the business, because she says she’s “a woman now”. What does that mean? That viewpoint doesn’t feel very pro-sex work to me.

I genuinely enjoyed watching this, if only because some parts were funny when they weren’t supposed to be, but I don’t know if I’ll watch it again. You, however, can find it here, and let me know what you think. Maybe I’m being to hard on it?