Spyce Club dancer Envy opened the competition. The slender, muscular dancer exhibited wonderful pole skills and awareness. Her naturally worn hair was tied up with a simple band, and she wore minimal makeup. I admired her skill, but knew that her lack of a distinctive theme wouldn’t allow her a top score. Her dancing was enviable, and the simplicity of her set was a gentle opener for the shenanigans that would follow.

Cherokee, up next, livened things up when she pulled a judge from his seat, shouting “Turn around!” For the first time in my short stripper life, I watched her pretend to ride him in 69 fashion, which elicited howls and squeals from audience and judges alike.

Next up was Natasha, who selected the delightfully retro “Honkey Tonk in Mexico” song as her theme. This smiling, bronzed goddess politely asked, “Can I pull your boobs out?” when she knelt over me. I declined, she nodded, and motorboated me instead. Bonus: her red lipstick stayed in place perfectly! I liked her. When she stage-humped the Abraham Lincoln impersonator (yes, that’s a real Portland persona), I felt that I had never seen anything more delightfully odd. And it wasn’t even midnight.

Next up was Angel, a tan, blonde young woman who smelled like pure sugar, and wore a tie and a button down, a la Fifty Shades. I wondered if she was familiar with the film’s support of rape culture. No matter, ever the objective judge, we scored her fairly.

Noelle from Coos Bay, Oregon was a statuesque, fire-haired curly girlie, who laughed and declined an offer of a ping-pong ball. I didn’t blame her. She was truly a master of the isolated butt cheek shake.

The next performer, Kaye from Pure Lace Club, was painted curiously, like a comic book character. I know zero about comics so I might have missed a reference. I think the audience was both confused and titillated when another dancer approached the stage and they briefly took turns licking each other’s nether regions. Their body paint sure was pretty!

Savannah was up after that, and she scared the shit out of some of us when she spun from the ceiling and dropped into a perfect set of nude splits. She was vajazzled and dazzling.

Leah, from Casa Diablo, also wore an elaborate vajazzle, and was bendy and fluid in motion. Random Guy in Crowd shouted,“CONSUME US WITH YOUR CONTORTIONS, YEAHHHHHH!” She pulled out her applique, and stuck in onto Abe Lincoln’s face. He left it there for the entirety of her set.

Kat from Presley’s Playhouse club wore glasses and sneakers and knee socks, and utilized glow sticks in a manner that one is free to imagine. Ginger of Casa Diablo was absolutely smooth, lithe, and cool, even when she sat on my perfectly curled coif and proceeded to rub her anus and labia upon my scalp. I was wrecked, and the audience was delighted. “DEATH BY VAGINA!” shouted the Loud Guy in Crowd. I made a mental note to wash my hair later. She was perhaps my favorite dancer to watch, because of her strong, confident exterior. The room was so loud that at that point there was no hearing the DJ announce the names of the next three performers. One dancer was cheerily winking her butthole at the judges, when a crowd member insisted upon screaming “Blow on it!” A non-stripper judge did so, and I cringed inwardly. The performer kept her smile intact, if she was perturbed at all, I know not.

Next up was Synodic, grinning in her undies, Wonder Woman socks, jazz shoes, and “Lick Me” glittery decals upon her stomach. She sucked and fucked popsicles, back-bending all over the stage.

On the softer side, a cute, curly haired blond dancer, Molly Mae from Club 205, trotted onstage to Elvis’ “Jailhouse Rock” in an orange jumpsuit costume. Loud Guy in Crowd screamed, “STOP BEING SO HOT!” The dancer put a set of costume cuffs on my wrists. Then she pulled a condom out of her vagina, and unrolled it to reveal a small baggy of white glitter, which she “snorted”, in front of the judges. This was shaping up to be better than an improv session.

Coco was the cutest little EDM mermaid, with an entrance song that sounded like a mix of Mario Kart and “Under the Sea.” The music was not to my liking, but Coco has one of the most gorgeous faces that I’ve ever seen. Then Trouble from Acropolis bounded on the stage. She brought balloons, champagne, and noisemakers, and wore glasses and a red braided faux hawk. As Snoop Dog played, she revealed a small, silver microphone: “Ever seen a vagina rap?” Before any of us could answer, she spread her legs and began kegelling in time to the lyrics.

Mary-Jane, or Mary-Gina, as she was announced, came on stage dressed as a giant joint. Really. Sublime was playing, and a human pot leaf came on to help her out. The two unceremoniously removed their costumes, and engaged in pole tricks and a minor amount of pussy licking. It was also not lost on the judges that the performers were polite enough to lay down a tarp, before dripping soy candle wax upon Mary-Jane’s ‘gina. 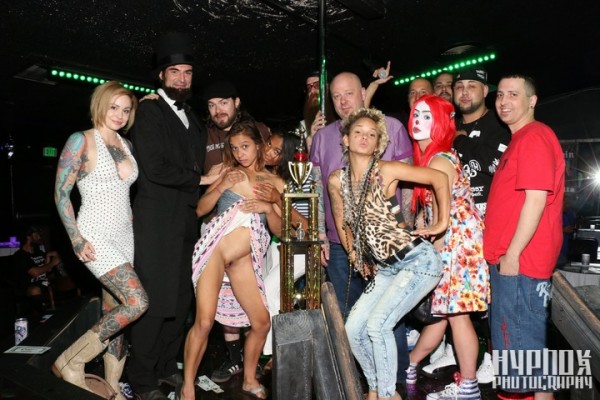 Next up was Ryder from Devil’s Point. The dancer wore a pink sparkly butt plug, a ruffled pink skirt, and a tiny t-shirt. Sucking on a rainbow lollipop, she handed out suckers and candies before doing a butt-shaking handstand, and inserting a glitter stick into herself. Eva from Stars was another dancer who knew how to present an aesthetic. She also put down some plastic, then dripped a shiny, metallic liquid upon her body to Chet Faker’s “Gold.”

Last up was beautiful Alexis Monroe from King’s Wild. The gorgeous, Marilyn-esque dancer had no noticeable tattoos and was all smiles while she disrobed. Her venue-required wristband displayed that she was under 21, and I marveled at the level of self-awareness that a young woman could possess.

It was late, nearing 2:30 a.m. One of the judges nearby struggled to keep her eyes open, and I was wondering how my alcoholic ass had managed to stay sober for an entire event.

The winners were announced!

The ladies took the stage, posed and smiled, covered in glitter and sweat.