Since I began writing this piece, both Scarlet Alliance and SWOP NSW have issued an apology to migrant sex workers for their part in the SEXHUM research. This is an unprecedented move in the right direction for peer organizations. I hope that there will be more attempts in the future to empower migrants and POC, including Aboriginal sex workers, toward self-advocacy. I also hope that in the future, such a statement and its denunciation of non-peer-led research will be initiated by organizations without the need for heavy internal and external pressure from migrant sex workers first. Indeed, I hope that no statements like this are necessary in the future because this complicity with typically unethical outsider-led research will cease to occur in the first place. 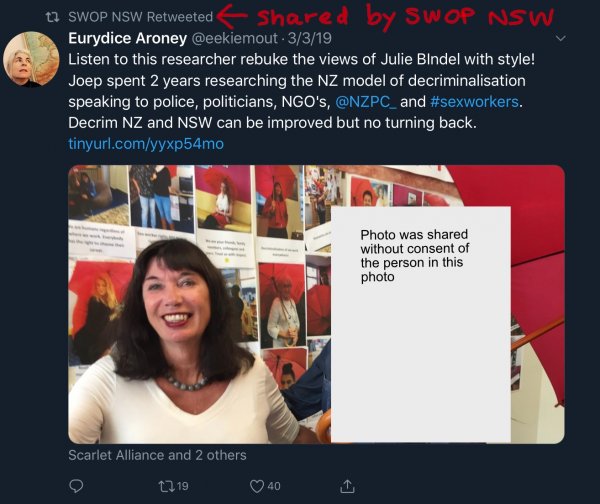 Applying this scenario to white sex workers reveals the normalized racist assumptions behind it—do white sex workers need to be researched to confirm that sex workers’ rights advocacy is important? I hope we can all agree that sex workers of all races should be listened to without the need for researchers to speak for us. We should only negotiate with researchers when absolutely necessary, if it directly benefits our community—we should be doing community-based participatory research ourselves to obtain any data we need.There are many peer researchers of all races available to assist with such research if needed.

Migrant sex workers are viewed as an inconvenience for white workers because our very existence may allow anti-trafficking crusaders to once again criminalize them. The trafficking narrative is so popular that there are many job opportunities for white researchers, peer or otherwise, bringing prestige and career prospects to these white sex work researchers who make patronizing use of migrant workers as subjects. There’s been very little effort to build capacity, unite, and empower migrant workers so that we can speak on our own behalf. Instead, peer sex worker organizations in NSW have become a human resource for researchers to find migrant workers to “interview”, while not benefiting these workers in any way. In addition, racist raids on Asian brothels and the targeting of Asian migrant sex workers by immigration still persist. And all these phenomena are supported by a biased media on migrant sex workers.

The sex worker activists’ rallying call “nothing about us without us” currently applies only to white workers.

The New Zealand model of decriminalization is often promoted as being the best model for sex workers. Yet, it still criminalizes migrant sex workers. People with valid working visas are still arrested and deported if they engage in sex work. Thus, sex work is not accepted as an occupation like any other in New Zealand. This fact is seen as irrelevant because it only applies to migrants. The whiteness of sex worker movement leadership is exemplified when the Prostitutes Collective, the major national peer sex worker organization in NZ, is complicit in the implementation of this model. To add insult to the injury, this model has been advocated for around the world for decades by other peer organizations at the cost of PMSW. For instance, the article shared by Eurydice Aroney in the above image is titled, “NZ sex work model a world leader, expert says” and the link was retweeted by a number of sex workers and sex worker organizations, from SWOP NSW to SWWAC, a coalition of Winnipeg-based sex workers. 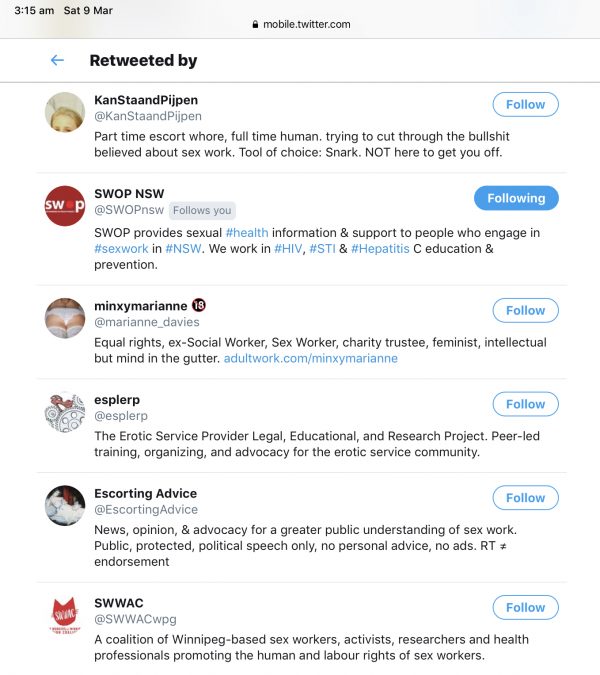 There seems to be little evidence to suggest that this is changing. Under the leadership of Catherine Healy, The Prostitutes Collective accepted criminalizing migrant workers as a condition of partial decriminalization of sex work in New Zealand. Nothing in the subsequent review of the legislation, publicly available on the Collective’s website, shows that any effort has been made to reform this section of the law. In a news article, Healy is quoted minimizing the problem by stating,”We’re not talking about significant numbers of people in this situation [migrant sex workers].” And yet while Healy was accepting the neo-colonial “honor” of damehood from the British queen, the raids, arrests, and deportations of migrant workers in New Zealand continued. Our numbers aside, the mistreatment of migrant sex workers in New Zealand is an issue when this model of decriminalization is promoted throughout the world, especially at a time when trafficking hysteria and racist anti-migrant panic are still on the rise. Rather than being held accountable for advocating for this flawed model, Healy enjoys the uncritical acceptance of her stance by most of the sex worker community. In a recent video recorded at a UN discussion on sex work, Healy again fails to correct a description of the NZ model as “full decriminalization”. Although she mentions that migrants are “discriminated” against, she does not explicitly explain that it is her Collective’s model which criminalizes us. 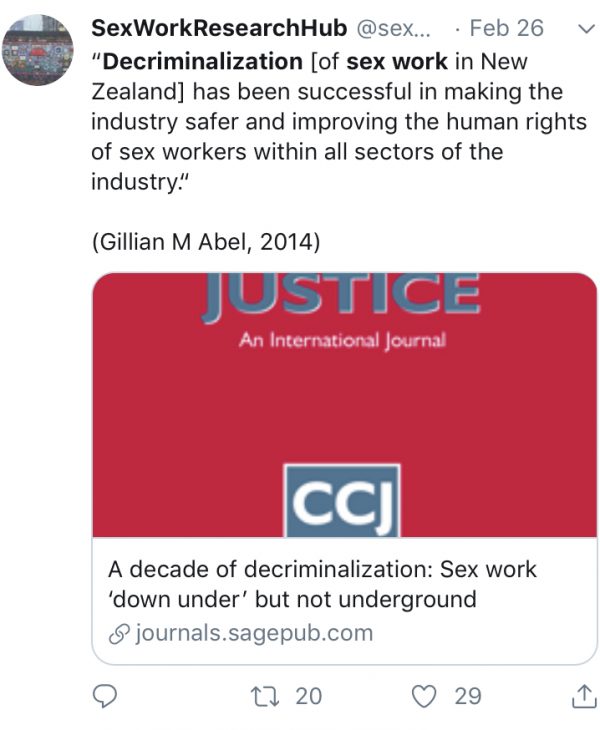 To clarify, street-based sex work itself is technically not criminalized in NSW currently. It is regulated out of certain sections of NSW and legal in certain parts of NSW. It makes more sense to understand NSW as having decriminalized indoor sex work but still not having achieved full decriminalization of sex work, because street sex workers labor under a heavily regulated framework which more closely resembles European legalization.

There’s a lesson here for activists. We must be prepared to tackle regulations and local council laws that will police sex workers even after full or partial decriminalization of sex work, such as the public nuisance and disorderly conduct laws commonly used against street sex workers globally. True decriminalization should never include advocating for legislation which criminalizes some sex workers from the beginning of this long battle against regulation. Criminalizing elements of sex work should best be described as mere legalization, and it inevitably sets the stage for discriminatory regulation even before this battle begins.

We may assume that NZ sex worker activists accepted partial criminalization in a “my rights first”/trickle down approach to human rights. But there is precedent for a more noble political strategy in the South Australian sex worker collective, SIN (Sex Industry Network) in Adelaide, who have persistently rejected decriminalization which still prohibits street-based sex work. Instead, they continue to wait for legislation that will fully decriminalize all sex work and not leave anyone behind.

I understand that peer organizations are underfunded and overworked. Regardless, it is imperative that we pay attention to POC, migrant workers, and other marginalized workers, to ensure that we have the space and capacity to organize and raise our voices. Peer sex worker organizations in New Zealand and NSW have failed to earn migrant workers’ trust, so we must represent ourselves.