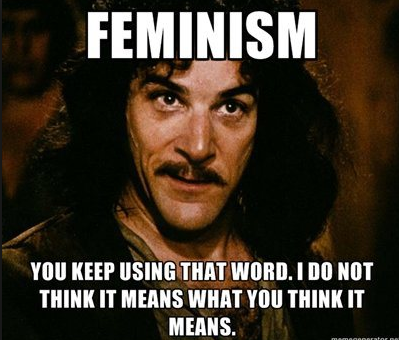 It’s clear how disingenuous labeling someone a choice feminist is when you look at where this argument is applied. It’s pretty much only used by white middle-class feminists in reference to other women in marginalized positions. Trans women are told the decision to transition is really a patriarchal plot. Sex workers are told they are brainwashed into deciding to do sex work. Can you imagine these same voices indicting women who work at Starbucks, at Walmart, or any minimum wage job, demanding they defend whether or not their job is empowering? How often do they accuse women who are CEOs or politicians of making choices the patriarchy foisted upon them?

Look at the individuals these feminists target. When Megan Murphy wanted to criticize women choosing to pose naked for photos, how many thousands of women could she have written about? But she chose to write about Laverne Cox, a trans woman of color who said, “It is revolutionary for any trans person to choose to be seen and visible in a world that tells us we should not exist.” Murphy’s hatred was palpable as she denied Cox her womanhood and derided her body as “some cartoonish version of a woman.” Even if you believe that Cox’s photo spread in Allure magazine was disempowering, was it more disempowering than Murphy’s article?

As Murphy was spotlighted for her anti-trans rant, many rushed to her defense with arguments against choice feminism. They ignored everything Cox said on the subject of her nude Allure magazine shoot and tried to make the argument be about a choice feminist straw person.

I want to be clear—choice feminism is a terrible concept. The idea that every women’s choices are innately feminist is overly simplistic, poorly thought out, and ignores the fact that some women choose to support racism, transphobia, and even misogyny. But while some individuals may genuinely believe in this premise, I’d be willing to bet that most of the time a woman is being criticized as a “choice feminist,” it’s a horrible misrepresentation and reduction of her position, and that her words are being distorted in the service of a rhetorical argument dismissing her decisions and the nuanced motivations behind them.