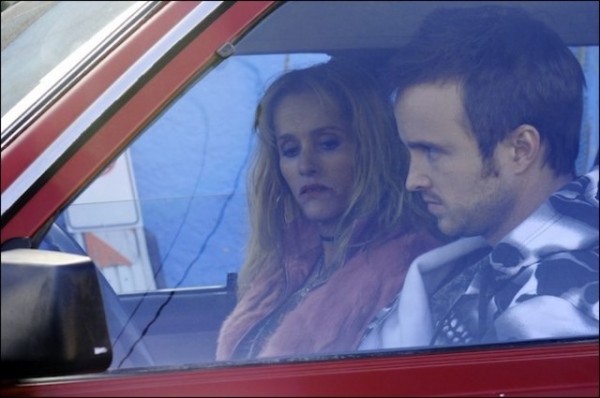 On paper, Wendy’s the stereotype Hank wants her to be. She lives in a motel, she’s a meth user, she has a son (Patrick, whom we never see), and she gives blowjobs to drive-through customers. She’s the worst-case scenario, and she’s very near the bottom of the classist ho hierarchy we all know and hate. She is, as one of my ignorant civilian acquaintances might say, “a crack whore, not a sex worker.” As a whore of privilege, I’m not qualified to present an opinion on the truthiness of the depiction of Wendy’s day-to-day—the frustrations, the dangers and the rewards that make it worthwhile—but still, watching Wendy, I recognize myself.

It’s her montage in season three that really sticks with me. We’re with her through most of her day as she chats with neighbors, blows clients, drinks a soda, counts cash, smokes meth, smokes cigarettes, talks to cops, throws a soda can at a short-changing customer, eats some takeout, fights with another sex worker and, at the end of the day, spends her cash. It’s a matter-of-fact three minutes that’s not even particularly judgmental. Yeah, there are the stereotypes—she has a poolside altercation over a coat with Elton John in a purple miniskirt?—but the deep pleasure she gets out of her afternoon can of root beer, and her sheer banshee rage at the fucker who paid her with an envelope full of scrap paper were dead on. And I don’t think I sympathized only as a sex worker. I think anyone who watches those three minutes gets it. Sex workers are people, and sex work is work. It’s exasperating, routine work that we do because we’ve calculated the risks versus the rewards, just like every other worker on the planet.

What I love most about the way Breaking Bad treats Wendy, though, is that we get to go past the shock value, and then past the realities (blow jobs, meth) and then into the interesting bit: her personal life. Wendy’s defining feature is her reliability, particularly as a friend to Jesse Pinkman, who is himself a perpetual fuck-up, yet half-decent person. Right after Wendy leaves Hank and Walt Junior in the parking lot, she retreats to her room where she fucks Jesse in a chair in shot that’s both perfunctory and, yeah, kinda hot, not gonna lie. Their relationship lives along blurred lines. He’s a client/dealer who pays in meth but she goes above and beyond for him. She agrees to be Jesse’s alibi (which involves having her door busted open, a SWAT team ransack her home, and a seriously ungentle arrest) and later we find out she sat through Hank’s vile, five-hour-long interrogation. (When Wendy mentions her “medical issues,” Hank laughs, “penis withdrawal? Schlongus interruptus?”)  Based on her solid performance there, Jesse wants her to help him out again, this time with a vigilante murder he’s planning. It’s a role she eventually agrees to, after decent payment and an explanation as to the morality of the act, which she evidently takes at face value.

When it comes to Jesse and Wendy, we never see evidence that he’s lied to her, or she to him. He asks for desperate, pushy, over-the-top favors, but he compensates her for them. Sometimes he’s rude, and maybe he doesn’t have the greatest hygiene, but he’s not a bad client or even a bad friend. And it is undeniable that he needs her more than she needs him. Right after they’re released from Hank’s interrogation, Wendy lingers silent and non-judgmental as Jesse calls his folks, and lies and begs and gets rejected. Then, when all his other options are exhausted, he turns back to her and they head out for breakfast. At that point, I think it’s a safe bet Wendy’s buying.

I was shocked to learn that Wendy’s only in three episodes, a fact I discovered when I went to write this ode to her, and found Julia Minesci, the actress who portrays her, listed as “meth whore” on IMDB. She’s so central to the show’s plotlines and emotional beats that I thought I’d be re-watching at least a dozen episodes. Regardless, as sex worker portrayals go, Wendy’s at the top of my list: she’s principled, smart, and she puts up with no shit. The next time someone stiffs me a 20, I will be pitching soda cans like a quarterback.