TITS AND SASS SERVICE JOURNALISM BY AND FOR SEX WORKERS
Home Books Striptastic! (2017) 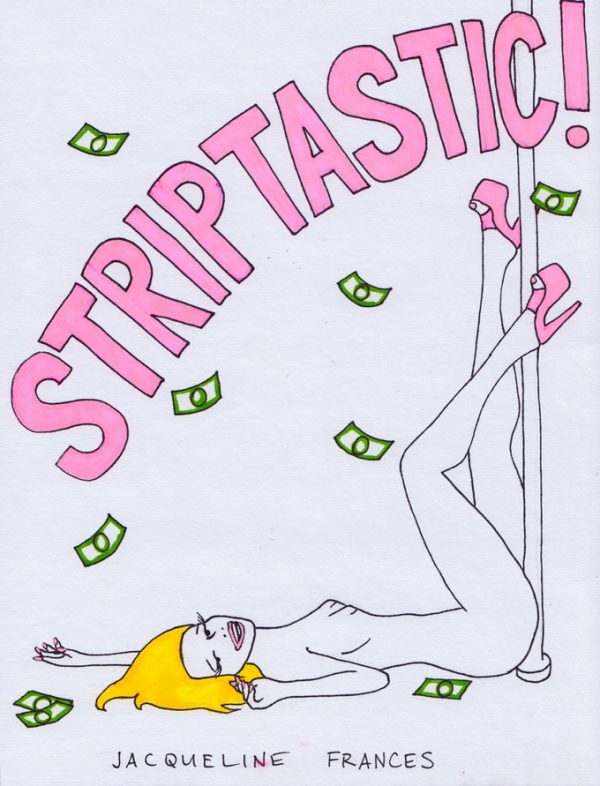 So unlike her memoir The Beaver Show (and unlike some reviewers, I actually read The Beaver Show), Striptastic! is a graphic novel, or rather, a series of gleeful comics that showcase the giddy energy of stripping at its most fun, communal, and lucrative. Frances gathered material from strippers around the world with a survey (and she shares the demographics of that survey and thanks participants at the end of the book) and then illustrated many of their anecdata and commentaries.

The illustrations are in Frances’ trademark breezy style and work well with the material.  From the beginning, you know what you’re in for, as it opens with your typical terrible man hang-up (“let me explain to you my shortcomings: I have a Madonna/Whore complex”), followed by several of this unfortunate man’s intelligent observations:”My reason to live is making you happy. I almost mean it.  I am very close to meaning it,” was my favorite line of his—before Frances welcomes us to Striptastic!, the women who pop from its pages, and the men who make you glad that tonight’s not your shift and thank god you have some time before dodging the fish-mouthed nipple divers and the men who never wash their hands (except for before they touch their penis!  Bless their lil’ hearts).  For anyone who has never been a stripper, Frances makes and slams closed the case against calling strip clubs “Gentlemen’s Clubs,” there’s nary a gentleman to be found; we know that even if their loved ones at home remain pleasantly deluded. 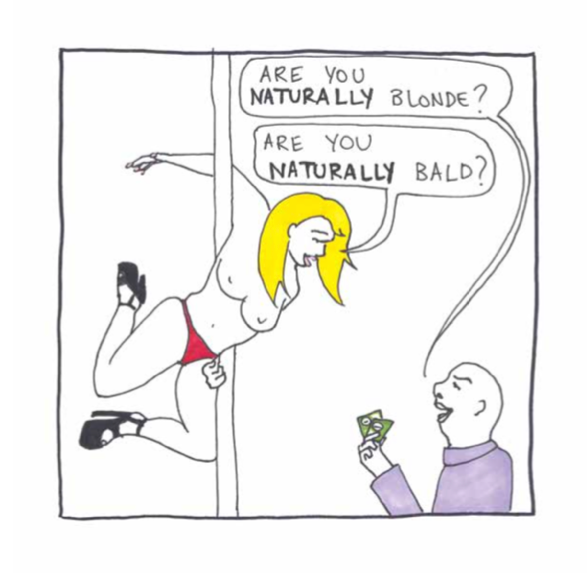 I enjoyed the book and I will probably give it to my dad—mostly as a joke, but if he does read it, it’s accessible and entertaining, and he’ll be able to take it in stride. Live Sex Acts and Sex Slaves and Discourse Masters can come later.  He’s still recovering from what Rachel Moran did to his understanding of the biz, and what he knows of my experiences in the club haven’t helped him any!  So while Jacq made it for us—strippers and sex workers—and we will recognize a lot within its pages, I think it’s also going to serve as a good intro for many sex workers’ relatives: “Look, it can be light and humorous!  We have friends!  We have agency!”

For sex workers who are looking for their experiences in print, this book reflects many of them: the giddy camaraderie of the dressing room, the normality of flashing your labia at your friends for a tampon string check (or butt zits), and the hushed whispers to your friends after a particularly bad or ridiculous customer interaction—of which a very satisfying amount are depicted! Maybe copies of Striptastic! need to lay prominently on strip club tables so customers can get a much-needed dose of reality before forcing us to play along with their drunken fantasies of an ever consenting-girl who doesn’t mind being touched right after they’ve adjusted their dick with that same nasty dick-hand.

However, rather than solely illustrating gleeful anecdotes about the horrendous and hilari-bad antics of strip club customers and management, and the tiny revenges against them we take to stay sane, Frances makes some broad claims about stripping as a radical act, claims that can’t possibly take the weight of actually smashing patriarchy (although they do make for good illustrations).  And this is where my ideological rigidity comes into play.

I am interested in a nuanced exploration of strip clubs, our experiences in them, and the power dynamics that influence and control our behavior and experiences in them. This is why I liked Sarah Katherine Lewis’s Indecent so very much: aside from the very end of the book (which read like a publisher-mandated mea culpa for her involvement in the biz), Lewis detailed the ways in which management, owners, customers, and even other workers, all work to maintain a version of male fantasy that’s performed by women with little social capital for the profit of management (largely men), owners (again, almost entirely men) and customers (same). The ugly side clearly didn’t outweigh the benefits she (and I, and Frances, and the rest of the workers in what is loosely understood as “the sex industry”) gain from putting up with the bad. Money is the only lasting form of power in this world and sex work is often the only way for women, most of whom have very little social capital, to get our hands on some; however, being able to survive in a way that makes waking up every day bearable doesn’t necessarily outweigh the material harms—the financial exploitation, the bad shifts, the bad customers, the nightmare of bad management—hidden behind our painted lips, arched backs, and shiny lucite heels. 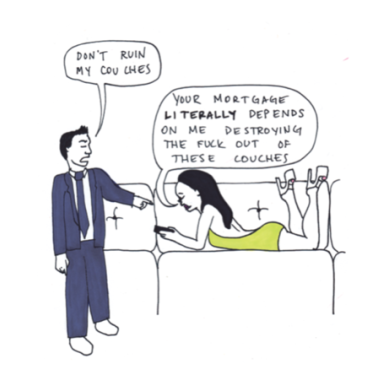 I wouldn’t critique the book on this level if Frances herself didn’t invoke these concepts of stripping being a victory over the patriarchy directly, because it’s a cute book.  But we’ve had about 15 years now of the sex positive “empowerment” argument for sex work, and it refuses to die despite activists’ best efforts, even though at this point most of the people who invoke the word “empowered” are primarily SWERFS.

I think it’s a mistake, misleading, and ultimately destructive to make these claims about any aspect of the sex industry: it’s 2017, late capitalism has been acknowledged to be our era and the phrase “there is no ethical consumption under capitalism” has been popularized to the point that one can slap it up on one’s Facebook profile picture for a week.  If we want to fight patriarchy and capitalism, we need to be honest about the insidiousness of both, and that includes their presence in the space of the club.

You don’t have to look far in the stripper-verse to hear stories or even live the worst aspects of the industry: I recently saw a woman complaining that her manager wouldn’t let her pump her breast milk while at work; I don’t have enough fingers to count off the women who’ve been sexually assaulted by customers, bouncers, or management at their work—including myself—and I can’t count off on any fingers the repercussions that any of these men faced.  There were none. I know of police that help cover up sexual abuse in strip clubs. In online stripper forums there are more requests for clubs where a dancer can make a living income than there are dancers who feel safe and secure in their incomes and at their clubs.  One of my good friends was telling me about her honeymoon when a bouncer leaned over and cracked, “Did you visit the gorillas?” We must have looked blank because he clarified, “They’re her relatives, you know.”

My friend is black.

Turns out you can’t report a hostile work environment on behalf of someone else, and my friend wasn’t willing to risk her job over such (relatively) minor racism. 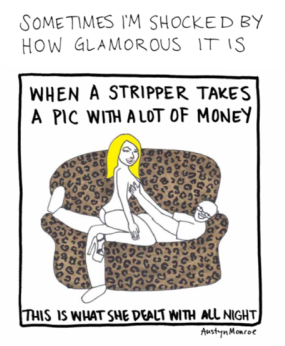 When I interviewed her, I talked with Jacq a bit about where she sees herself in the sex workers’ rights movement.  And while it seemed like a novel idea to her that she might have a place in it at all, I think the work she’s doing will later be seen as foundational in creating a cohesive communal understanding among strippers and other sex workers around the English-speaking world.  Seeing yourself represented in a popular media, not to mention seeing someone normalizing your job while turning the tables on nosy civilians in hilarious cartoons where strippers ask if cubicle dwellers are doing okay and tell their therapists they’re just there for the conversation, is more than a little thrilling. The therapist one made me cackle aloud. I hope that this is the start of a new resurgence of strength and commitment in the sex worker rights’ movement because we need it badly.

Beyond turning the tables on civilians, it was a relief to me to see that there were also anecdotes and illustrations included in Striptastic! that do reveal a more complex reality than one dominated by women smashing patriarchy.

These experiences (experiences every dancer I know has had, and why are managers so delusional about the furniture in the club? We are visibly wearing shoes that efficiently act as couch destroyers, just relax and get used to the idea of multiple re-upholsterings a year) suggest a space where women are valued for little more than their ability to bring in money, not a space where women’s ability to make a living income is respected and protected, and clearly not spaces where women’s boundaries aren’t tested or violated or compromised for the sake of that income.

What would a space that truly didn’t test women’s boundaries, and where the women workers always left with a living income, look like? Is it possible to operate one successfully in the late capitalist United States? Especially now, as the stripping (haha, get it) of employee protections and workers rights continues apace at all levels except for that of CEOs?

These are questions for another book, and that’s okay.  Because Striptastic! is a celebration of the good times that also shows some of the bad times, and it does it in a way that’s so clear and accessible. Every girlfriend of every drunk customer can see and agree with how fucking annoying her boyfriend is, and the rest of us can smack our copies together in a literary toast.  It’s hard fucking work, but we aren’t doing it alone.  We have each other.