TITS AND SASS SERVICE JOURNALISM BY AND FOR SEX WORKERS
Home Media Stay In Your Fucking Lane, Male Reporters 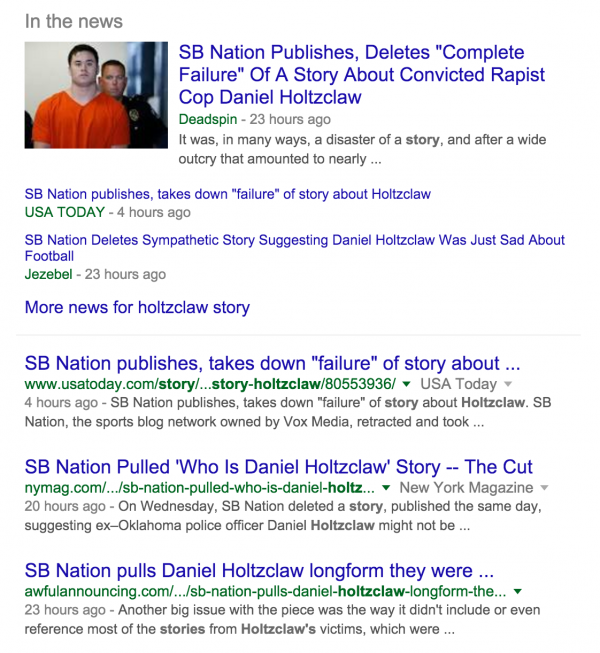 If you spent any amount of time online last Wednesday you probably noticed social media going into a collective rage over SB Nation’s longform profile of Daniel Holtzclaw. Holtzclaw, for those unfamiliar, was a deranged police officer and a convicted serial rapist, a man that targeted Black sex workers. The story was live less than a day before SB made the unorthodox decision to pull it. What went wrong?

Writer Jeff Arnold made a series of missteps in his reporting, as did his editors. Arnold decided “sympathetic portrait” was a fair angle for his story about a man who came from a relatively mundane background.  The bulk of the story consisted of Arnold asking men from Holtzclaw’s past: Are you surprised this guy turned out to be a monster? Does he seem like a rapist to you? He quotes one female source.

Ex-T&S editor Susan Shepard pointed out to me how creepy it is that a prominent source in Arnold’s story is Brian Bates, an investigator contracted by Holtzclaw’s defense team. Bates himself has a pretty screwed up relationship with prostitution; he’s the man who gave us JohnTV and, post-sentencing, remains a Holtzclaw truther.

Many wondered how the Holtzclaw story was ever deemed publishable. It only took me one guess (and probably one guess for all our readers): Not a single woman edited it.

The way you talk about us has a direct impact on our ability to advocate for ourselves and on the tremendous stigma that we face every minute of our lives. When we are fighting for our bodily safety, this dismissal of our humanity by a journalist amplifies our daily risk of harm. It invites violence against our bodies by implying that we are not real, whole people.

Even the so-called “good” male reporters who cover sex work don’t seem very good to me.  Think of Nick Kristof’s damaging crusade against trafficking. Or a well-meaning Noah Bertlasky’s use of the gross term “child sex worker.” I’m sick of voyeuristic coverage that reads like a TER review, or ironic coverage that makes us into a punchline. I’m sick of male writers that need to be coddled when they’re told they’re not first priority. Male reporters—at least, the ones who aren’t sex workers themselves—need to stay in their fucking lane.